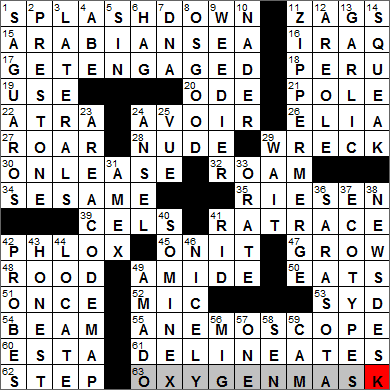 Today’s Wiki-est, Amazonian Googlies
Across
15. Gwadar Bay is an inlet of it ARABIAN SEA
The Arabian Sea is an arm of the Indian Ocean that lies off the south coasts of Pakistan and Iran, and is bounded in the west by Somalia, and in the east by India.

Gwadar Bay is an inlet of the Arabian Sea in the Gulf of Oman. The Bay is divided by the maritime border between Pakistan and Iran.

16. Fertile Crescent land IRAQ
The Fertile Crescent is a large swath of land in the Near East that includes the Nile Valley in the west and the land around the Tigris and Euphrates in the east.

22. Big name in shaving ATRA
Fortunately for crossword setters, the Atra razor was introduced by Gillette in 1977. The Atra was sold as the Contour in some markets and its derivative products are still around today.

Charles Lamb published a famous collection of essays simply entitled “Essays of Elia”. Elia was actually a clerk and co-worker of Charles Lamb, whereas Lamb was the author.

34. Oil source SESAME
Sesame oil is extracted from sesame seeds. Sesame oil is one of the nutritionally “good” oils in that it is high in polyunsaturated fatty acids. Unlike most “good” oils, sesame oil keeps at room temperature, due to the presence of naturally occurring preservatives.

35. “Long-lasting” chocolate brand RIESEN
Riesen is a chocolate that is produced and sold in Germany, and is also sold here in the US. Riesen introduced a recipe for a hot chocolate drink in 2007. The recipe calls for melting the chocolate candy over heat in a saucepan, then adding one cup of milk per candy piece. Sprinkle nutmeg to taste.

39. Collectible sheets CELS
In the world of animation, a cel is a transparent sheet on which objects and characters are drawn. In the first half of the 20th century the sheet was actually made of celluloid, giving the “cel” its name.

42. Colorful flowers PHLOX
Phlox is a genus of flowering plants found mainly in North America. The common name for the plant is Jacob’s Ladder.

47. Wax GROW
The verbs “to wax” and “to wane” come from Old English. To wax is to increase gradually in size, strength, intensity or number. To wane is to decrease gradually.

48. Crucifix ROOD
A rood is a crucifix that specifically symbolizes the cross on which Jesus was crucified.

A jack is a socket that accepts a plug, allowing a connection to some electrical circuit.

53. Barrett of Pink Floyd SYD
Syd Barrett was the lead singer and a founding member of the English rock band Pink Floyd. Barrett was only active as a musician for just over ten years. He retired from the music scene in 1975 and spent the next 30 years living off Pink Floyd royalties until he passed away in 2006.

55. Weather vane ANEMOSCOPE
“Anemoscope” is the general name given to any device that shows the direction of the wind. The prefix “anemo-” comes from the Greek word “anemos” meaning “wind”.

Down
1. Sonoran Desert natives SAGUAROS
The saguaro is a beautiful cactus, native to the Sonoran Desert in Arizona and in Sonora, Mexico. If you are ever near the Saguaro National Park in southern Arizona, I thoroughly recommend a visit.

2. Coolant giant PRESTONE
Prestone is a brand of antifreeze that is used as a radiator additive in one’s car.

The antifreeze that we put into our cars has ethylene glycol as the active ingredient. Ethylene glycol is dangerous stuff, and is very poisonous. Ingestion causes calcium oxalate crystals to form in the kidneys. It sounds like a horrible way to go …

3. Some gridiron passes LATERALS
We never used the word “gridiron” when I was growing up in Ireland (meaning a grill used for cooking food over an open fire). So, maybe I am excused for finding out relatively recently that a football field gridiron is so called because the layout of yard lines over the field looks like a gridiron used in cooking!

7. Evidence of descent DNA
I’ve always been fascinated by the fact that the DNA of living things is so very similar across different species. Human DNA is almost exactly the same for every individual (to the degree of 99.9%). However, those small differences are sufficient to distinguish one individual from another, and to determine whether or not individuals are close family relations.

8. James whose company published the first U.S. edition of “The Prince and the Pauper” OSGOOD
James R. Osgood was a publisher and friend of Samuel L. Clemens, who of course wrote under the pen name “Mark Twain”. Osgood published several of Twain’s works, including “The Prince and the Pauper”, “The Stolen White Elephant” and “Life on the Mississippi”. Osgood actually accompanied Clemens on a riverboat trip in which the author collected material for “Life on the Mississippi”.

10. “Unsafe at Any Speed” author NADER
Ralph Nader has run as a third-party candidate for the office of President of the United States four times now, in every election from 1996 to 2008. Nader’s name was first first linked with the presidential race in 1971, when the famous Dr. Benjamin Spock offered to stand aside as candidate in the 1972 race if Nader would agree to run, but he declined.

“Unsafe at Any Speed” is a 1965 book by consumer advocate Ralph Nader in which the author accuses car manufacturers of resisting the introduction of safety features in order to maximize profit.

11. Orderly traffic pattern ZIPPER MERGE
The “zipper merge” or “late merge” is encouraged by most traffic authorities when two lanes of traffic are merging into one. The alternative “early merge”, where cars move out of the lane that is closing before reaching the merge point, tends to be discouraged. The favored technique is to use both lanes until the merge point, and then alternate (zipper) from each lane through the merge itself. That said, one should always obey whatever instructions are given by the traffic authorities at the scene. And I know, a lot of people think it rude not to merge early …

13. Bruschetta ingredient GARLIC
In Italy the word “bruschetta” is pronounced differently than most people tend to pronounce the same word here in the US. We should be saying “broo-sketta” and not “broo-shetta”.

23. Phone book feature AREA CODE MAP
Area codes were introduced in the 1940s. Back then the “clicks” one heard when dialling a number led to mechanical wear on various pieces of equipment. In order to minimize overall mechanical wear, areas with high call volumes were given the most efficient area codes (lowest number of clicks). That led to New York getting the area code 212, Los Angeles 213 and Chicago 313.

24. Adams of filmdom? ANSEL
As an amateur photographer, I have been a big fan of the work of Ansel Adams for many years and must have read all of his books. Adams was famous for clarity and depth in his black and white images. Central to his technique was the use of the zone system, his own invention. The zone system is a way of controlling exposure in an image, particularly when there is a high contrast in the subject. Although the technique was developed primarily for black & white film, it can even apply to digital color images. In the digital world, the main technique is to expose an image for the highlights, and one or more images for the shadows. These images can then be combined digitally giving a final photograph with a full and satisfying range of exposures.

25. Saturn SUV VUE
Saturn was a brand of car introduced by General Motors in 1985 in response to the success of Japanese imports in North America. Saturn cars were built by a subsidiary of the company that operated relatively independently, with its own assembly plant in Tennessee and its own retailer network.

31. Former Food & Wine publisher, familiarly AMEX
“Food & Wine” is a high-end monthly magazine published since 1978. The magazine was sold to American Express in 1980, who passed it on to Time Inc. in 2013.

36. City south of Tampa SARASOTA
Sarasota is a city on Florida’s Gulf Coast. The area was noted on maps in the mid-1700s as “Zara Zote”, perhaps a local name. The name became “Sara Sota” when European settlers arrives in the late 1840s, and finally “Sarasota” in 1902.

37. Adaptable subspecies ECOTYPES
In evolutionary terms, an ecotype or ecospecies is a subspecies that becomes a variety distinct from the main population as it adapts to specific environmental conditions. For example, there are two ecotypes of reindeer. The tundra reindeer migrates between two environments as the weather changes with the seasons, whereas the woodland reindeer remains in the forest year-round.

40. Aid for the restless SOMINEX
Sominex is an over-the-counter sleeping aid containing an antihistamine that has hypnotic properties and so induces sleep.

43. With 4-Down, one-time White House nickname HONEST
(4D. See 43-Down ABE)
Abraham Lincoln was the 16th President of the US, elected in 1860 as the first president from the Republican Party. Lincoln’s electoral support came almost exclusively from the north and west of the country, winning only two out 996 counties in the Southern slave states. Lincoln led the country through Civil War, and then was assassinated in 1865 just a few days after Robert E. Lee surrendered his army of Northern Virginia. President Lincoln was succeeded in office by Vice President Andrew Johnson.