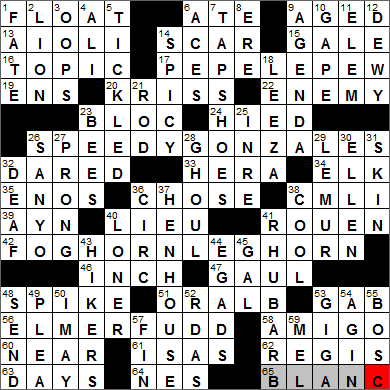 Today’s Wiki-est, Amazonian Googlies
Across
1. Rose Parade vehicle FLOAT
The first Rose Parade was staged in 1890, on New Years Day in Pasadena, California. The initial parades were organized by the Pasadena Valley Hunt Club, whose members wanted to highlight the mild winter weather in the area. The initial parades did not feature flowers, but these were added to underscore the favorable climate. It was the inclusion of the flowers that gave rise to the name “Tournament of Roses”. The first Rose Bowl football game was played in 1902.

13. Garlicky mayo AIOLI
To the purist, especially in Provence in the South of France, the “home” of aioli, aioli is prepared just by grinding garlic with olive oil. However, other ingredients are often added to the mix, particularly egg yolks.

15. Wind of 32 to 63 mph, on the Beaufort scale GALE
The Beaufort wind scale is named after Irishman, Sir Francis Beaufort, a Rear-Admiral in the Royal Navy. Beaufort was a hydrographer as well as a career navy man.

17. “I am ze locksmith of love, no?” speaker PEPE LE PEW
Pepé Le Pew is a very likeable cartoon character from the Looney Tunes and Merrie Melodies series. Pepé is a French skunk, first introduced way back in 1945. He is always thinking of “l’amour” and chases the lady skunks, or a black cat with a white stripe painted down her back accidently.

19. Naval Acad. grad ENS
Ensign is (usually) the most junior rank of commissioned officer in the armed forces. The name comes from the tradition that the junior officer would be given the task of carrying the ensign flag.

20. Mr. Kringle KRISS
“Kris Kringle” (sometimes “Kriss Kringle”) is the name sometimes used here in North America for Santa Claus. “Kris Kringle” is an anglicised form of “Christkind”, the bringer of gifts in many other countries including Austria, the Czech Republic and parts of Germany. “Christkind” is German for “Christ-child”.

23. Voting alliance BLOC
To do something “en bloc” is to do it all together. “En bloc” is French for “in a block, lump”.

26. “Ándale! Ándale! Arriba! Arriba!” speaker SPEEDY GONZALES
When I was a kid, Speedy Gonzales was one of my favorite cartoon characters. He was billed as “The Fastest Mouse in all Mexico” and tore around the place yelling “¡Ándale! ¡Ándale! ¡Arriba! ¡Arriba! ¡Epa¡ ¡Epa! ¡Epa! Yeehaw!”

33. Olympian queen HERA
In Greek mythology, Hera was the wife of Zeus and was noted for her jealous and vengeful nature, particularly against those who vied for the affections of her husband. The equivalent character to Hera in Roman mythology was Juno. Hera was the daughter of Cronus and Rhea.

34. Lodge member ELK
The Benevolent and Protective Order of Elks (BPOE) was founded in 1868, and is a social club that has about a million members today. It started out as a group of men getting together in a “club” in order to get around the legal opening hours of taverns in New York City. The club took on a new role as it started to look out for poor families of members who passed away. The club now accepts African Americans as members (since the seventies) and women (since the nineties), but atheists still aren’t welcome.

35. Genesis grandchild ENOS
Enos was the son of Seth and the grandson of Adam and Eve.

39. Novelist Rand AYN
Ayn Rand was a Russian-American novelist born Alisa Rosenbaum. Rand’s two best known works are her novels “The Fountainhead” published in 1943 and “Atlas Shrugged” in 1957. Back in 1951, Rand moved from Los Angeles to New York City. Soon after, she gathered a group of admirers around her with whom she discussed philosophy and shared drafts of her magnum opus, “Atlas Shrugged”. This group called itself “The Collective”, and one of the founding members was none other than future Federal Reserve chairman, Alan Greenspan.

41. French city where Joan of Arc died ROUEN
Rouen is the major city in Normandy in northern France. During the days of Norman Britain, Rouen was one of the capitals of the Anglo-Norman dynasties. Rouen was also where Joan of Arc was burned at the stake in 1431.

Joan of Arc (also Jeanne d’Arc, her birth name) led the French Army successfully into battle a number of times during the Hundred Years War with England. When she was eventually captured, Joan was tried in Rouen, the seat of the occupying English government in France at that time. There she was burned at the stake having been found guilty of heresy. Joan of Arc was canonized some 600 years later, in 1920, and is now one of the patron saints of France.

42. “That’s a joke, ah say, that’s a joke, son” speaker FOGHORN LEGHORN
Foghorn Leghorn is a lovable rooster who appears in “Looney Tunes” and “Merrie Melodies” cartoons from the forties through the sixties. Foghorn’s marvelous voice was provided by the great Mel Blanc. The rooster’s demeanor was drawn directly from a character called Senator Beauregard Claghorn, a blustery Southern politician who appeared regularly on radio’s “The Fred Allen Show”.

47. France, under Caesar GAUL
The Gauls were a Celtic race, with Gaul covering what is now known as France and Belgium.

51. Toothbrush brand ORAL-B
The Oral-B toothbrush was introduced to the world in 1950, designed by a California periodontist. The first “model” was the Oral-B 60, a name given to reflect the 60 tufts in the brush. In 1969, the Oral-B was the first toothbrush to get to the moon as it was the toothbrush of choice for the crew of the Apollo 11 spacecraft.

56. “I’m hunting wabbits” speaker ELMER FUDD
Elmer Fudd is one of the most famous of all the Looney Tunes cartoon characters, the hapless nemesis of Bugs Bunny. If you have never seen it, check out Elmer and Bugs in the marvelous “Rabbit of Seville”, a short cartoon that parodies Rossini’s “Barber of Seville”. Wonderful stuff …

58. Puerto Rican pal AMIGO
Puerto Rico is located in the northeastern Caribbean (in the Atlantic Ocean), east of the Dominican Republic. The name “Puerto Rico” is Spanish for “rich port”. The locals often call their island Borinquen, the Spanish form of “Boriken”, the original name used by the natives.

62. Kelly’s 2000s morning co-host REGIS
Regis Philbin is an amazingly popular television personality. Philbin is in such high demand and has had such a long career, that he holds the Guinness World Record for the most time spent in front of a television camera (in excess of 16,000 hours).

When Kelly Ripa secured the co-host spot on morning television with Regis Philbin, she was still acting in “All My Children” in a role she had been playing for over ten years. After a year of holding down two jobs, she eventually gave up the acting gig.

Down
4. “The Greatest” boxer ALI
One of Muhammad Ali’s famous most famous lines is “I am the greatest!” So famous is the line that in 1963, Ali released an album of spoken word that had the title “I Am the Greatest!”

7. Footwear for Gregory Hines TAP SHOES
Maurice and Gregory Hines are a pair of brothers famous for starting out their show business careers as tap dancers. Maurice made one film appearance, in 1984’s “The Cotton Club”. The younger brother, Gregory, has been more visible in front of the camera. Gregory was one of the leads in “The Cotton Club”, and had his own “The Gregory Hines Show” on television.

9. List of items to be discussed AGENDA
“Agenda”is a Latin word that translates as “things to be done”, coming from the verb “agere” meaning “to do”.

14. Like much Cajun cuisine SPICY
Cajun cuisine is named for the French-speaking Acadian people who were deported from Acadia in Canada to Louisiana in the 18th century.

The great explorer Verrazzano gave the name “Arcadia” to the coastal land that stretched from north of present day Virginia right up the North American continent to Nova Scotia. The name Arcadia was chosen as it was also the name for a part of Greece that had been viewed as idyllic from the days of classical antiquity. The “Arcadia” name quickly evolved into the word “Acadia” that was used locally here in North America. Much of Acadia was settled by the French in the 1600s, and then in 1710 Acadia was conquered by the British. There followed the French and Indian War after which there was a mass migration of French Acadians, often via the French colony of Saint-Dominique (present-day Haiti) to the French colony of Louisiana. The local dialectic pronunciation of the word “Acadian” was “Cajun”, giving the name to the ethnic group for which Louisiana has been home for about 300 years.

18. TV host Gibbons LEEZA
Leeza Gibbons has her own radio show called “Hollywood Confidential”, and used to have her own talk show on NBC television that aired from 1994 to 2000. Gibbons is the founder of a nonprofit group called Leeza’s Place which supports people giving care to patients with memory disorders. Since 2007 she has been a board member of California’s stem cell research agency, appointed by Governor Arnold Schwarzenegger.

28. Grave robber GHOUL
Our word “ghoul” comes from the Arabic “ghul”, the name for an evil spirit that feeds on corpses.

29. Madagascar primate LEMUR
Lemurs are the most unusual-looking creatures, native to the island of Madagascar off the east coast of Africa. With their white fur and dark eyes that are very reflective at night, they have a “ghostly” appearance. Indeed, the animals takes their name from Roman mythology in which “lemures” were spirits of the restless dead.

Madagascar is the large island country lying off the southeast coast of Africa in the Indian Ocean. The main island of Madagascar is the fourth largest island in the world (after Greenland, New Guinea and Borneo).

30. Actress Barkin ELLEN
Ellen Barkin is an actress from the Bronx in New York City. I mostly know Barkin from her roles in the 1989 movie “Sea of Love” and 2007’s “Ocean’s Thirteen”.

36. Mag. sales CIRC
A magazine’s (mag’s) sales figures are referred to as its circulation (circ.).

55. Greenish-yellow pear BOSC
Bosc is a cultivar of the European Pear grown in the northwest of the United States. The Bosc is that pear with a skin the color of a potato, with a long neck. I always seem to use the potato as my point of reference. How Irish am I …?

57. Creepy “Jaws” sighting FIN
“Jaws” is a thrilling 1975 movie directed by Steven Spielberg that is based on a novel of the same name by Peter Benchley. The film has a powerful cast, led by Roy Scheider, Richard Dreyfuss and Robert Shaw. “Jaws” was perhaps the first “summer blockbuster” with the highest box office take in history, a record that stood until “Star Wars” was released two years later.

59. With 65-Across, longtime voice of 17-, 26-, 42- and 56-Across MEL
(65A. See 59-Down BLANC)
Mel Blanc was known as “The Man of a Thousand Voices”. We’ve all heard Mel Blanc at one time or another, I am sure. His was the voice behind such cartoon characters as Bugs Bunny, Daffy Duck, Porky Pig, Tweety Bird, Woody Woodpecker, Elmer Fudd and Barney Rubble. And the words on Blanc’s tombstone are … “That’s All Folks”.