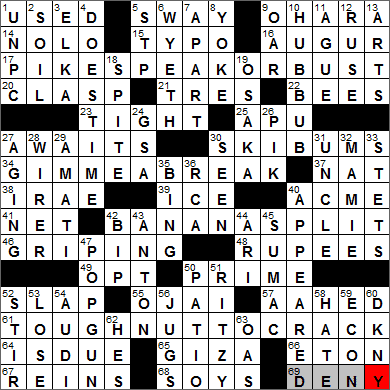 17A. Colorado Gold Rush motto PIKE’S PEAK OR BUST
34A. “How stupid do you think I am?!” GIMME A BREAK!
42A. Diet-busting ice cream treat BANANA SPLIT
61A. One who’s not easily convinced TOUGH NUT TO CRACK

Today’s Wiki-est, Amazonian Googlies
Across
1. Like many eBay items USED
eBay was founded in 1995 as AuctionWeb as part of a computer programmer’s personal website. One of the first items purchased was a broken laser pointer, for $14.83. The buyer collected broken laser pointers …

14. __ contendere: court plea NOLO
“Nolo contendere” is a legal term that translates from Latin as “I do not wish to contend”. It’s the plea of “no contest” and is an alternative to “guilty” or “not guilty”, meaning that one doesn’t admit guilt but nor does one dispute the charge.

16. Be an omen of AUGUR
The verb “to augur” means “to bode”, to serve as an omen. The term comes from the name of religious officials in Ancient Rome called augurs whose job it was to interpret signs and omens.

17. Colorado Gold Rush motto PIKE’S PEAK OR BUST
The Pike’s Peak Gold Rush in the late 1850s and early 1860s was later referred to as the Colorado Gold Rush. Those gold seekers were called the “Fifty-Niners”, a play on the “Forty-Niners” of the California Gold Rush that started a decade earlier. The Fifty-Niners sometimes used the motto “Pike’s Peak or Bust”, referring to the mountain in the Front Range of the Rocky Mountains.

The peak in the Rocky Mountains that we now called “Pike’s Peak” was called “El Capitán” by the original Spanish settlers in the area. It was renamed in honor of Zebulon Pike, Jr. who led an expedition into Southern Colorado in 1806. The local Arapaho people use the name “heey-otoyoo’” meaning “long mountain”.

22. Spelling contests BEES
Back in 18th-century America, when neighbors would gather to work for the benefit of one of their group, such a meeting was called a “bee”. The name “bee” was an allusion to the social nature of the insect. In modern parlance, a further element of entertainment and pleasure has been introduced, for example in a “quilting bee”, or even a “spelling bee”.

25. Kwik-E-Mart owner on “The Simpsons” APU
The fictional Kwik-E-Mart store is operated by Apu Nahasapeemapetilon on “The Simpsons” TV show. The convenience store owner doesn’t seem to be making much use of his Ph.D in computer science that he earned in the US. Apu’s undergraduate degree is from Caltech (the Calcutta Technical Institute), where he graduated top of his class of seven million students …

37. Crooner Cole NAT
Nat King Cole’s real name was Nathaniel Adams Coles. Cole made television history in 1956 when his own show debuted on NBC, a first for an African-American. Cole couldn’t pick up a national sponsor, so in order to save money and possibly save the show, many guest artists worked for no fee at all – the likes of Ella Fitzgerald, Harry Belafonte and Peggy Lee. The show survived for a year, but eventually Nat King Cole had to pull the plug on it himself.

38. “Dies __”: Latin hymn IRAE
“Dies Irae” is Latin for “Day of Wrath”. It is the name of a famous melody in Gregorian Chant, one that is often used as part of the Roman Catholic Requiem Mass.

40. Zenith ACME
The “acme” is the highest point, coming from the Greek word “akme” which has the same meaning.

42. Diet-busting ice cream treat BANANA SPLIT
The banana split was created in Latrobe, Pennsylvania in 1904. This particular sundae was the idea of David Stickler, a young apprentice pharmacist at the Tassel Pharmacy’s soda fountain.

48. Delhi money RUPEES
The rupee is a unit of currency used in India, Sri Lanka, Nepal and Pakistan.

52. Give a high-five to SLAP
The celebratory gesture that we call a “high five” is said to have been invented by former baseball players Dusty Baker and Glenn Burke when they were both playing for the Los Angeles Dodgers in the later 1970s.

55. City near Santa Barbara OJAI
The city of Ojai, California is located just northwest of Los Angeles. One of the city’s claims to fame is that according to the TV shows “The Bionic Woman” and “The Six Million Dollar Man”, Jaime Sommers and Steve Austin grew up in Ojai and were childhood sweethearts!

65. Egyptian pyramid city GIZA
Giza is located on the west bank of the Nile, about 20 km southwest of Cairo. The nearby Giza Plateau is home to some of the most amazing ancient monuments on the planet, including the Great Pyramid of Giza and the Great Sphinx.

66. School on the Thames ETON
The famed English public school of Eton College is located closed to Windsor, just outside London. The school is on the River Thames and has long been associated with the sport of rowing. During the summer months, those boys who participate in rowing are known as the “wet bobs”, while those boys who prefer to play cricket, tennis or athletics are called the “dry bobs”.

68. Tofu beans SOYS
Tofu is another name for bean curd, and is a Japanese word meaning just that … bean that has “curdled”. Tofu is produced by coagulating soy milk, using either salt or something acidic. Once the protein has coagulated, the curds are pressed into the familiar blocks. Personally I love tofu, but my wife, she absolutely hates it …

The difference between a premium and regular gasoline is its octane rating. The octane rating is measure of the resistance of the gasoline to auto-ignition i.e. it’s resistance to ignition just by virtue of being compressed in the cylinder. This auto-ignition is undesirable as multiple-cylinder engines are designed so that ignition within each cylinder takes place precisely when the plug sparks, and not before. If ignition occurs before the spark is created, the resulting phenomenon is called “knocking”.

6. “Christina’s World” painter Andrew WYETH
Andrew Wyeth was known as a realist painter and “the painter of the people” in recognition of his popularity with the man in the street. His neighbor, Helga Testorf, posed for a total of 247 paintings over a 14 year period, a series known as “The Helga Pictures”. The remarkable thing is that neither Wyeth’s wife nor Testorf’s husband knew anything about the portrait sessions or the paintings.

“Christina’s World” is an Andrew Wyeth painting that dates back to 1948. The subject of the work is Christina Olson, a woman who suffered from polio that paralyzed her lower body. In the picture, Wyeth painted Christina crawling across a field towards a house in the distance.

8. Oxen neckwear YOKE
A yoke is that wooden beam used between a pair of oxen so that they are forced to work together.

9. Dinghy driver OAR
Our term “dinghy” comes from the Hindi “dingi”, the word for a small boat.

11. Fever and chills AGUE
An ague is a fever, one usually associated with malaria.

19. Honshu metropolis OSAKA
The Japanese city of Osaka used to be called Naniwa, with the name changing to Osaka some time before 1500. “Osaka” can be translated either as “large hill” or “large slope”.

24. Fed. agency that supports other agencies GSA
The US Government’s General Services Administration (GSA), as the name suggests, provides general services to other federal agencies. So for example, the GSA manages office space for the other agencies, and transportation.

29. Italian violin maker AMATI
The first of the Amati family to make violins was Andrea Amati, who lived in the 14th century. He was succeeded by his sons, Antonio and Girolamo. In turn, they were succeeded by Girolamo’s son, Nicolo. Nicolo had a few students who achieved fame making musical instruments as well. One was his own son, Girolamo, and another was the famed Antonio Stradivari.

31. Cry of concession UNCLE
To “say uncle” is an American expression meaning to submit or yield. Its usage dates back to the early 1900s, but nobody seems to know how “uncle!” came to mean “stop!”

32. Dwight’s spouse MAMIE
Mamie Eisenhower has to have been one of the most charming of all the First Ladies of the United States. Ms. Eisenhower suffered from an inner ear complaint called Ménière’s disease which caused her to lose her balance quite often. Because she was unsteady on her feet there were unfounded rumors floating around Washington that Ms. Eisenhower had a drinking problem. People can be very unkind …

33. Undoes a dele STETS
“Stet” is a Latin word meaning “let it stand”. In editorial work, the typesetter is instructed to disregard any change previously marked by writing the word “stet” and then underscoring that change with a line of dots or dashes.

35. Crooner Crosby BING
The singer Bing Crosby was a great lover of the game of golf. Crosby had just finished up 18 holes on a course in Spain in 1977 when he suffered a massive heart attack on the final green. Crosby’s last words were “That was a great game of golf, fellas.”

42. Marcel Marceau character BIP
Marcel Marceau was the most famous mime of all time, a native of Strasbourg in France. Marceau’s best known character was “Bip”. The great mime made a cameo appearance in Mel Brooks’s “Silent Movie”, playing himself. In the scene, Mel Brooks is asking Marceau to appear in his movie (a question asked silently of course, in subtitles), and Marceau turns to the camera and speaks the only word in the whole film, “Non!” (French for “No!”). The mime speaks! Brilliant …

43. Playwright Chekhov ANTON
Anton Chekhov was a Russian writer of short stories and a playwright, as well as a physician. He wrote four classic plays that are often performed all around the world, namely “The Seagull”, “Uncle Vanya”, “Three Sisters” and “The Cherry Orchard”. All the time Chekhov was writing, he continued to practice medicine. He is quoted as saying “Medicine is my lawful wife, and literature is my mistress.”

44. D-backs, on scoreboards ARI
The Arizona Diamondbacks joined Major League Baseball’s National League in 1998. By winning the World Series in 2001, the Diamondbacks became the fastest expansion team to do so in Major League history.

54. High-end German car AUDI
The Audi name has an interesting history. The Horch company was founded by August Horch in 1909. Early in the life of the new company, Horch was forced out of his own business. He set up a new enterprise and continued to use his own name as a brand. The old company sued him for using the Horch name so a meeting was held to choose something new. Horch’s young son was studying Latin in the room where the meeting was taking place. He pointed out that “Horch” was German for “hear” and he suggested “Audi” as a replacement, the Latin for “listen”.

56. Hooch containers JUGS
In the Klondike gold rush, a favorite tipple of the miners was “Hoochinoo”, a liquor made by the native Alaskans. Soon after “hooch” (also “hootch”) was adopted as a word for cheap whiskey.

60. Fashion initials DKNY
Donna Karan is an American fashion designer, creator of the DKNY clothing label. Karan was very much raised in the fashion industry, as her mother was a model and her stepfather a tailor.

62. “__ making a list …” HE’S
The Christmas song “Santa Claus Is Coming To Town” was introduced to us in November of 1934 on Eddie Cantor’s radio show. The song was written by John Frederick Coots and Haven Gillespie.

63. Post-WWII alliance OAS
The Organization of American States (OAS) has its headquarters in Washington, D.C. All the independent states in the Americas are members of the group except Honduras, which had its membership suspended after the country’s 2009 coup.