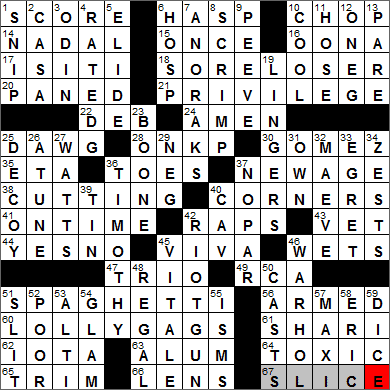 CROSSWORD SETTER: Peter A. Collins
THEME: Cutting Corners … each of the answers in the CORNERS of today’s grid are associated with CUTTING:

Today’s Wiki-est, Amazonian Googlies
Across
6. Trunk hardware HASP
The “hasp” of a lock might refer to more than one thing. The u-shape loop protruding from a padlock is often called a “lock hasp”, for example.

14. 2013 US Open winner NADAL
Rafael Nadal is a Spanish tennis player who is noted for his expertise on clay courts, earning him the nickname “The King of Clay”.

The US Open is one of the oldest tennis championships in the world, having started out as the US National Championship in 1881. Today, the US Open is the last major tournament in the Grand Slam annual series, following the Australian Open, the French Open and Wimbledon.

16. Chaplin’s widow OONA
Oona O’Neill dated J. D. Salinger and Orson Welles in her teens, but ended up marrying Charlie Chaplin. Oona was still pretty young when she married Chaplin, much to the dismay of her famous father, the playwright Eugene O’Neill. After the marriage Eugene disowned Oona as he was pretty upset about 54-year-old Chaplin marrying his 18-year-old daughter.

17. Query in Matthew IS IT I?
At the Last Supper, Jesus told his apostles that one of them would betray him that day. According to the Gospel of Matthew:

20. Like French doors PANED
French doors usually come in pairs, and have glass panels throughout the body of the door.

22. One having a ball DEB
Deb is short for “debutante”, which translates from French as “female beginner”.

24. “You said it!” AMEN!
The word “amen” is translated as “so be it”. “Amen” is said to be of Hebrew origin, but it is likely to be also influenced by Aramaic and Arabic.

28. Like a GI doing dishes ON KP
KP is a US military slang term, and stands for either “kitchen police” or “kitchen patrol”.

37. Meditative genre NEW AGE
New Age music is created to provide a relaxing and stress-free atmosphere. The New Age movement is often said to have begun with the release of an album called “Spectrum Suite” by Steven Halpern in 1975.

43. One might make a setter better VET
The breeds of dog known as setters are all gundogs and are used in hunting game.

45. Start of a Spanish cheer VIVA
“Viva” is Spanish for “long live”.

46. Antiprohibitionists WETS
A “wet” is someone who supports legislation allowing the production and sale of alcoholic drinks.

There were concerted efforts to ban the sale of alcoholic beverages in the US from the 1840s right up until the lobbyists achieved success with ratification of the Eighteenth Amendment to the US Constitution in 1919. While there were several factors that influenced legislators at that time, one was the perceived need to take political power away from German-based brewing industry during WWI.

47. The Supremes, e.g. TRIO
The Supremes were the most successful vocal group in US history, based on number one hits. The group started out in 1959 as a four-member lineup called the Primettes. The name was changed to the Supremes in 1961. One member dropped out in 1962, leaving the Supremes as a trio. Lead singer Diana Ross began to garner much of the attention, which eventually led to a further name change, to Diana Ross & the Supremes.

51. Ristorante choice SPAGHETTI
In Italian, one might order spaghetti in a restaurant (ristorante).

The term “spaghetti” is a plural diminutive form of the Italian word “spago”, which means “thin string, twine”.

61. First name in puppetry SHARI
Shari Lewis was the original puppeteer behind the PBS children’s show “Lamb Chop”. After Shari Lewis died in 1998, her daughter Mallory took over the role of puppeteer on the show.

62. Smidgen IOTA
Iota is the ninth letter in the Greek alphabet. We use the word “iota” to portray something very small as it is the smallest of all Greek letters.

63. Reunion invitee ALUM
An “alumnus” (plural … alumni) is a graduate or former student of a school or college. The female form is “alumna” (plural … alumnae). The term comes into English from Latin, in which alumnus means foster-son or pupil. “Alum” is an informal term used for either an alumna or an alumnus.

Down
1. Sassy sort SNIP
The use of “snip” to mean an impertinent or mischievous person is an informal usage.

2. Honduran home CASA
Honduras is a Central American country that used to be known as Spanish Honduras, in order to differentiate it from British Honduras that is now called Belize. “Honduras” is the Spanish word for “the depths”, which is probably a reference to deep coastal waters.

3. Frigg’s husband ODIN
In Norse mythology, Odin was the chief of the gods. Odin’s wife Frigg was the queen of Asgard whose name gave us our English term “Friday” (via Anglo-Saxon). Odin’s son was Thor, and his name gave us the term “Thursday”.

4. Like most Pixar movies RATED G
Pixar Animation Studios started out as part of Lucasfilm in 1979, George Lucas’s production company. Lucas sold what was to become Pixar to Apple CEO Steve Jobs in 1986. Pixar produced its first feature film in 1995, the fabulous “Toy Story”, and followed up with a string of hits. The company was then sold to Walt Disney in 2006, when valued at $7.4 billion. That transaction resulted in Steve Jobs becoming the biggest shareholder in Walt Disney.

5. Skip over ELIDE
“To elide” is to pass over, omit or slur a syllable when speaking.

7. Arctic wear ANORAKS
Anoraks aren’t very popular over here in America. Everyone has one in Ireland! An anorak is a heavy jacket with a hood, often lined with fur (or fake fur), and is an invention of the Inuit people.

“Sawbuck” is slang for a ten dollar bill. The term was applied to the bill as the Roman numeral X (ten) resembles the end of sawhorse.

23. American frontiersman BOONE
Daniel Boone was a pioneer and folk hero. For Boone the frontier was what we now call the state of Kentucky. He led the building of the Wilderness Road through the famous Cumberland Gap in the Appalachians, a route subsequently taken by hundreds of thousands of migrants into Kentucky. Boone fought in the Revolutionary War with distinction, and after the war returned to Kentucky and got himself into land speculation. He became mired in debt, forcing him to emigrate to Missouri to settle down on land that was at that time owned by the French. It was there that he spent the last decades of his life.

27. “King Kong” actress Naomi WATTS
Naomi Watts was born in the UK and moved to Australia when she was 14 years of age. It was in Australia that Watts got her break in television and movies. Probably her most acclaimed role was in the 2003 film “21 Grams” with Sean Penn and Benicio del Toro. Watts is best friends with fellow Australian actress Nicole Kidman.

The classic 1993 movie “”King Kong” was remade in 2005 by Peter Jackson of “Lord of the Rings” fame. The female lead, played by Fay Wray in the original, was portrayed by Naomi Watts in the remake. The cost of production was a whopping $207 million, a record for any movie made up to that date.

32. Novelist Binchy MAEVE
Maeve Binchy was a fabulous Irish novelist, and in my day a famous newspaper columnist whose column I would read everyday. A few of her novels have made it to the big screen, including two I would recommend, “Circle of Friends” starring Chris O’Donnell and Minnie Driver, and “Tara Road” starring Andie MacDowell.

33. Pond wader EGRET
At one time the egret species was in danger of extinction due to excessive hunting driven by the demand for plumes for women’s hats.

36. Coarse grass used as fodder TIMOTHY
Timothy-grass is a perennial grass that is native to much of Europe that was introduced into North America by early settlers. A farmer named Timothy Hanson pioneered the use of the grass as a hay in the early 1700s, and because of this the species became known as Timothy-grass.

37. Without face value NO-PAR
In days gone by, when companies first issued a stock, each share would be given a face value (called “par value”). In effect, the company was making a commitment not to issue any more stock under that par value, giving investors confidence that there was no better deal to be had. Nowadays, most stock is issued without such a “guarantee” and is called “no-par stock”.

39. __ lizzie TIN
The Ford Model T was the first really affordable car that was offered for sale, and it was produced from 1908 to 1927. It was the Model T that ushered in the era of assembly line production, which greatly cut down the cost of manufacture. The engine was designed to run on petrol, kerosene or even ethanol. Famously, the Model T was known colloquially as the “Tin Lizzie”.

40. NBAer who plays at “The Q” CAV
The Cleveland Cavaliers are the professional basketball team based in Cleveland, Ohio. The Cavs joined the NBA as an expansion team in 1970. The team plays at the Quicken Loans Arena in downtown Cleveland, a facility that the locals refer to as “the Q”.

46. Pop art pioneer WARHOL
Andy Warhol went through a period of painting iconic American products, including Coca-Cola bottles and Campbell’s tomato soup cans. In 1964 he participated in a gallery show called “The American Supermarket”. Along with other pop artists he contributed works including a painting of a can of Campbell’s tomato soup. He priced the painting at $1,500, and sold autographed cans of soup for $6 a piece.

53. Some basilica singers ALTI
In choral music, an alto (plural “alti”) is the second-highest voice in a four-part chorus made up of soprano, contr(alto), tenor and bass. The word “alto” describes the vocal range, that of the deepest female singing-voice, whereas the term “contralto” describes more than just the alto range, but also its quality and timbre. An adult male’s voice (not a boy’s) with the same range as an alto is called a “countertenor”.

58. Burdon of The Animals ERIC
Eric Burdon is an English singer, a founding member of the sixties rock band called the Animals. By 1969 Burdon was living in San Francisco and joined the Californian funk rock band called War.

The Animals were sixties band from Newcastle in the north of England. The Animals had a few fabulous hits including “The House of the Rising Sun” and “We Gotta Get out of This Place”. These hits made it across the Atlantic to North America as part of the British Invasion.

59. Rollers without wheels DICE
As we all know, the numbers on dice are arranged so that the opposite faces add up to seven. Given this arrangement, the numbers 1, 2 and 3 all meet at a common vertex. Now, there are two ways of arranging the 1, 2 and 3 around the common vertex, a so called right-handed die (clockwise 1-2-3) or a left-handed die (counterclockwise 1-2-3). Traditionally, dice used in Western cultures are right-handed, whereas Chinese dice are left-handed. Quite interesting …