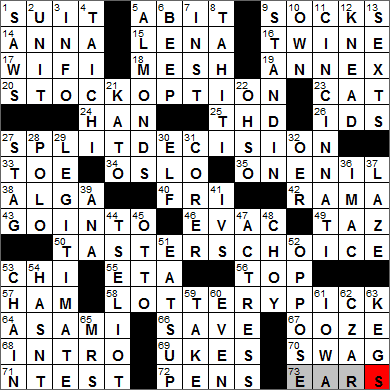 CROSSWORD SETTER: Jeff Stillman
THEME: Alternatives at the End … each of today’s themed answers ends with a type of alternative:

Today’s Wiki-est, Amazonian Googlies
Across
14. Tolstoy’s “__ Karenina” ANNA
I have to admit to not having read Tolstoy’s novel “Anna Karenina”, but I did see the excellent 1977 British television adaptation starring Nicola Pagett. Most regard the 1935 film starring Greta Garbo in the title role as the definitive big screen adaptation of the novel.

15. Jazz singer Horne LENA
Lena Horne was an American jazz singer, actress, dancer and civil rights activist. Horne started out her career as a nightclub singer and then began to get some meaty acting roles in Hollywood. However, she ended up on the blacklist during the McCarthy Era for expressing left wing political views. One of Horne’s starring roles was in the 1943 movie “Stormy Weather” for which she also performed the title song.

17. Hot spot connection WI-FI
“Wi-Fi” is nothing more than a trademark, a trademark registered by an association of manufacturers of equipment that use wireless LAN (Local Area Network) technology. A device labeled with “Wi-Fi” has to meet certain defined technical standards, basically meaning that the devices can talk to each other. The name “Wi-Fi” suggests “Wireless Fidelity”, although apparently the term was never intended to mean anything at all.

23. Siamese or Abyssinian CAT
The exact origins of the Siamese cat aren’t very clear, but it is believed to be from Southeast Asia. The Siamese takes its name from the sacred temple cats of Thailand (once called Siam).

The Abyssinian is a popular short-haired breed of domestic cat. The name “Abyssinian” would seem to indicate that the breed originated in Ethiopia (formerly “Abyssinia”), but most stories suggest that the Abyssinian comes from Egypt.

24. Solo in “Star Wars” HAN
Han Solo is the space smuggler in “Star Wars” played by Harrison Ford. Ford was originally hired by George Lucas just to read lines for actors during auditions for “Star Wars”, but over time Lucas became convinced that Ford was right for the pivotal role of Han Solo.

26. Dog tags, for instance IDS
The identification tags worn by soldiers are often called “dog tags”, simply because they do resemble tags worn by dogs. US military personnel are required to wear dog tags when in the field. Each soldier wears either two tags or a special tag that breaks easily into two identical pieces. The idea is that if a soldier is killed then one half can be removed for notification and the remaining half stays with the body. Each tag contains basics such as name and ID number, medical information like blood type, and possible a religious preference.

34. Norway’s capital OSLO
Oslo is an ancient city, founded around 1048. The medieval city was destroyed by fire in 1624 and was rebuilt by the Danish-Norwegian King Christian IV and renamed Christiania. In 1877 there was an official change of the name’s spelling to “Kristiania”, and then more recently in 1925 the name was restored to the original Oslo. Things have gone full circle as the center of Oslo, the area that would have been contained by the original medieval walls, has recently been named Christiania again.

38. Aquatic plant ALGA
Algae are similar to terrestrial plants in that they use photosynthesis to create sugars from light and carbon dioxide, but they differ in that they have simpler anatomies, and for example lack roots.

49. Omnivorous Looney Tunes devil, familiarly TAZ
The “Looney Tunes” character known as the Tasmanian Devil, or “Taz”, first appeared on screens in 1964 but gained real popularity in the 1990s.

The carnivorous marsupial known as the Tasmanian devil is aptly named, in the sense that the only place the animal is found in the wild is on the island of Tasmania. The “little devils” are about the size of a small dog, and they have the strongest bite for their size of any known mammal.

50. Folgers competitor TASTER’S CHOICE
“Taster’s Choice” is a brand of instant coffee made by Nestlé.

“Folgers” is a brand of coffee made by Smuckers. The brand name comes from the Folgers Coffee Company that was founded in 1835 by J. A. Folger in Nantucket, Massachusetts.

66. Use a piggy bank SAVE
The word “pig” can be used for earthenware, or an earthenware shard. From this usage there evolved the term “pig jar” that described an earthenware pot that could be filled with water for use as a bed-warmer. Crockery pots were also used to collect coins and these were also termed “pig jars”. By the 1700s, these pig jars had evolved into the first “piggy banks”.

69. Hawaiian strings UKES
The ukulele (“uke”) originated in the 1800s and mimicked a small guitar brought to the Hawaiian Islands by Portuguese immigrants.

73. Dumbo’s wings EARS
The 1941 Disney animated film “Dumbo” was made a year after the feature called “Fantasia” was released. “Dumbo” was largely a commercial venture. The film was made quickly and released in theaters as soon as possible, the idea being to recoup the financial losses incurred by “Fantasia”.

Down
2. Condo division UNIT
The words “condominium” and “apartment” tend to describe the same type of residential property, a private living space with facilities shared with others residing in the same building or complex. The difference is that a condominium is usually owned, and an apartment is rented. At least that’s how it is in the US. The word “condominium” comes from the Latin “com” (together) and “dominum” (right of ownership).

5. Teardrop-shaped nutlike snacks ALMONDS
Our everyday usage of “nut” is often at odds with the botanical definition of the term. Examples of “true nuts” are acorns, chestnuts and hazelnuts. On the other hand, even though we usually refer to almonds, pecans and walnuts as “nuts”, botanically they are classified ed as “drupes”. True nuts and drupes are both fruits, the vehicle that flowering plants use to disseminate seeds. True nuts are examples of a “dry fruit”, a fruit that has no fleshy outer layer. Drupes are examples of “fleshy fruits”, a fruit with a fleshy outer layer that often makes it desirable for an animal to eat. Familiar examples of drupes are cherries, peaches and plums. We eat the fleshy part of these drupes, and discard the pit inside that contains the seed. Other examples of drupes are walnuts, almonds and pecans. The relatively inedible flashy part of these drupes is usually removed for us before they hit our grocery stores shelves. We crack open the pit inside and eat the seed of these drupes. And while we do that, we forget that we’re eating something akin to a cherry or a peach, and we call it a nut!

8. South Seas getaway TAHITI
Captain Cook landed in Tahiti in 1769, although he wasn’t the first European to do so. But Cook’s visit to Tahiti was the most significant in that it heralded a whole spate of European visitors, who brought with them prostitution, venereal disease and alcohol. Paradoxically, they also brought Christianity. Included among the subsequent visitors was the famous HMS Bounty under the charge of Captain Bligh.

10. “To thine __ self be true” OWN
In Shakespeare’s “Hamlet”, Polonius is an important character eventually killed by Hamlet, albeit in a case of mistaken identity. Polonius has two memorable lines in the play that are oft-quoted today. “To thine own self be true”, and “Neither a borrower nor a lender be”.

11. Ohio city CINCINNATI
Cincinnati, Ohio was the first major city to be founded after the American Revolution, and indeed was the first major inland city to be founded in the whole country. Cincinnati was a boomtown in the 1800s, but it’s growth slowed as the the railroads displaced the steamboats as the major form of transportation. The city was founded in 1788, and was named “Cincinnati” two years later. It was named for the Society of Cincinnati, an organization with the mission to preserve the ideals and fellowship of the officers of Revolutionary War. The society was in turn named for Lucius Quinctius Cincinnatus. cincinnatus was farmer in ancient Rome who left his land to serve as Consul and then lawful dictator of Rome during a war emergency, before happily handing back power to the Senate after the war was won.

13. Titillating cellphone messages SEXTS
“Sexting” (a portmanteau of “sex” and “texting”) is the sending of explicit dialog and images between cell phones. The term “sexting” was first coined by the UK’s “Sunday Telegraph Magazine” in a 2005 article. Apparently the practice is “rampant” among teens and young adults. Whatever happened to dinner and a movie …?

21. Green Hornet’s sidekick KATO
In “The Green Hornet” television series, Kato was famously played by Bruce Lee. The Kato role has been cited as a driving force behind the increase in popularity of martial arts in the US during the sixties.

28. Game on horseback POLO
The game of polo originated in Iran, possibly before the 5th century BC. Polo was used back them primarily as a training exercise for cavalry units.

32. “__ the fields we go” O’ER
The traditional Christmas song “Jingle Bells” was first published in 1857, penned by James Lord Pierpont. We associate the song with Christmas, although in fact Pierpont wrote it as a celebration of Thanksgiving.

36. PC alternative IMAC
The iMac is a desktop computer platform from Apple introduced in 1998. One of the main features of the iMac is an “all-in-one” design, with the computer console and monitor integrated.

39. California’s Santa __ ANA
Santa Ana is the county seat of Orange County, California and takes its name from the Santa Ana River that runs through the city.

44. Poet whose work inspired “Cats” TS ELIOT
Andrew Lloyd Webber’s source material for his hit musical “Cats” was T. S. Eliot’s “Old Possum’s Book of Practical Cats”. Eliot’s collection of whimsical poems was published in 1939, and was a personal favorite of Webber as he was growing up. “Cats” is the second longest running show in Broadway history (“Phantom of the Opera” is the longest and is still running; deservedly so in my humble opinion). my wife and I have seen “Cats” a couple of times and really enjoyed it …

45. Director Preminger OTTO
Otto Preminger was noted for his films that pushed the envelope in terms of subject matter, at least in the fifties and sixties. Great examples would be 1955’s “The Man with the Golden Arm” that dealt with drug addiction, 1959’s “Anatomy of a Murder” that dealt with rape, and 1962’s “Advise and Consent” that dealt with homosexuality. If you’ve seen these films, you’ll have noticed that the references are somewhat indirect and disguised, in order to get past the censors.

61. State known for its caucuses IOWA
The Iowa caucuses have been the first major electoral event in the nominating process for President since 1972.

62. Business bigwig CZAR
The term czar (also tsar) is a Slavic word that was first used as a title by Simeon I of Bulgaria in 913 AD. “Czar” is derived from the word “Caesar”, which was synonymous with “emperor” at that time.

65. “__ Doubtfire” MRS
The 1993 comedy “Mrs. Doubtfire” is based on a 1987 novel called “Madame Doubtfire” by Anne Fine. The movie is set and was filmed in San Francisco. The title role is of course played by Robin Williams who spent most of the movie dressed as the female Mrs. Doubtfire. Perhaps not surprisingly, the movie with the Oscar for Best Makeup.