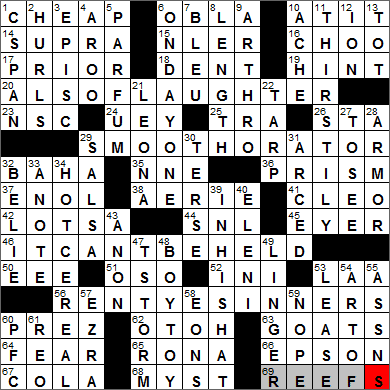 20A. Franken and Yankovic, for example? ALS OF LAUGHTER (from “peals of laughter”)
29A. Silver-tongued speaker? SMOOTH ORATOR (from “smooth operator”)
46A. “Sorry, the mayo is put on in advance”? IT CAN’T BE HELD (from “it can’t be helped”)
56A. “Heretics only” apartment building ad? RENT, YE SINNERS (from “repent, ye sinners”)

Today’s Wiki-est, Amazonian Googlies
Across
6. Beatles nonsense syllables OB-LA
“Ob-La-Di, Ob-La-Da” was one of many songs credited to Lennon/McCartney that was actually written by just one of the pair. Paul McCartney wrote this one, a song that John Lennon really did not like at all. Apparently Lennon was quite obstructionist during the recording of the song and even walked out at one point.

15. Met or Nat NLER
The New York Mets baseball team was founded in 1962, a replacement for two teams that the city had lost, namely the Brooklyn Dodgers and the New York Giants. For several years the Mets played very poorly, finishing no better than second-to-last in their division. Then of course along came the “Miracle Mets” who beat the Baltimore Orioles in 1969 to claim the World Series in a huge upset.

The Washington Nationals baseball team started out life as the Montreal Expos in 1969. The Expos moved to Washington in 2005 becoming the Nats. There are only two Major Leagues teams that have never played in a World Series, one being the Mariners and the other the Nats.

19. Soupçon HINT
Soupçon translates literally from French into English as “suspicion”, and can be used in the sense that a “suspicion” of something is a just a hint, a crumb.

20. Franken and Yankovic, for example? ALS OF LAUGHTER (from “peals of laughter”)
Al Franken is the junior US Senator from Minnesota. Franken won the seat in 2009 after an extremely close race, a race that he eventually won by just 312 votes. Prior to serving in the Senate, Franken was a noted satirist and writer for “Saturday Night Live”.

“Weird Al” Yankovich is a singer-songwriter who is noted for writing and performing parodies of popular songs. Of the 150 or so such songs, the best known are probably “Eat It” (parodying “Beat It” by Michael Jackson) and “Like a Surgeon” (parodying “Like a Virgin” by Madonna).

23. Gp. currently chaired by Obama NSC
The National Security Council (NSC) was created by President Harry S. Truman in 1947. The NSC is chaired by the sitting president and meets in the White House Situation Room.

26. Union in D.C., e.g. STA
There are a lot of stations called “Union Station” in the US. This is because the generic “union station” is one built by two or more railroad companies acting in concert or “union”, sharing tracks and facilities.

36. A dispersive one is commonly triangular PRISM
When light passes through a prism, it is split up (“disperses”) into differing wavelengths. It then becomes clear that white light is actually a mixture of different colors, which show up as beautiful spectra.

37. Carbon compound ENOL
An enol is an alkene with a hydroxyl group, sort of part-alkene and part-alcohol. The term “enol” therefore, is a portmanteau of “alkene” and “alcohol”.

38. Avian abode AERIE
An aerie is the nest of an eagle.

41. “Pinocchio” goldfish CLEO
In the 1940 Disney animated feature “Pinocchio”, the woodcarver Geppetto has two pets. He has a tuxedo cat called Figaro and goldfish called Cleo.

“The Adventures of Pinocchio” is an 1883 children’s novel by Carlo Collodi, which is all about an animated puppet called Pinocchio and Geppetto, his poor woodcarver father. Pinocchio is prone to telling lies, the stress of which causes his short nose to become longer.

46. “Sorry, the mayo is put on in advance”? IT CAN’T BE HELD (from “it can’t be helped”)
Mayonnaise originated in the town of Mahon in Menorca, a Mediterranean island belonging to Spain. The Spanish called the sauce “salsa mahonesa” after the town, and this morphed into the French word “mayonnaise” that we use in English today.

60. Abe or Dick PREZ
Abraham Lincoln was the 16th President of the US, elected in 1860 as the first president from the Republican Party. Lincoln’s electoral support came almost exclusively from the north and west of the country, winning only two out 996 counties in the Southern slave states. Lincoln led the country through Civil War, and then was assassinated in 1865 just a few days after Robert E. Lee surrendered his army of Northern Virginia. President Lincoln was succeeded in office by Vice President Andrew Johnson.

President Richard Milhous Nixon used “Milhous” in his name in honor of his mother Hannah Milhous. Richard was born in a house in Yorba Linda, California. You can visit that house today as it is on the grounds of the Richard Nixon Presidential Library. It’s a really interesting way to spend a few hours if you ever get to Yorba Linda …

64. “The foundation of most governments”: John Adams FEAR
John Adams was the second President of the United States. I must admit that I learned much of what I know about President Adams in the excellent, excellent HBO series “John Adams”. Having said that, I also visited his home in Quincy, Massachusetts not too long ago. He was clearly a great man with a great intellect …

65. Novelist Jaffe RONA
Rona Jaffe was an American novelist perhaps most famous for two of her books, “The Best of Everything” and “Mazes and Monsters”. “The Best of Everything” was published in 1958 and has been compared with the HBO television series “Sex and the City” as it depicts women in the working world. “Mazes and Monsters” was published in 1981 and explores a role-playing game similar to Dungeons & Dragons and the impact it has on players.

66. Big name in printers EPSON
Seiko Epson is a Japanese company, one of the largest manufacturers of printers in the world. The company has its roots in the watch business, roots that go back to 1942. Seiko was chosen as the official timekeeper for the 1964 Summer Olympics in Tokyo and was asked to supply a timer that produced a printed record. This request brought Seiko into the business of printer production. The company developed the world’s first mini-printer for the 1964 Games and called it EP-101 (EP standing for Electronic Printer). In 1975 Seiko introduced the next generation of EP printers which was called EPSON, from “SON of EP”. Cute, huh?

68. Game in which the player is called the Stranger MYST
In the days when I played the occasional video game, the best of the bunch was undoubtedly “Myst”. It is a game full of puzzles with the player wandering through a beautifully-designed (for its day) interactive world.

Down
1. Airer of debates C-SPAN
C-SPAN is a privately-funded, non-profit cable channel that broadcasts continuous coverage of government proceedings.

5. Chanel No. 5 bottle word PARFUM
Chanel No. 5 is a perfume that was released by Coco Chanel back in 1921. Chanel had an affinity for the number “5”, and always presented her dress collection on May 5th (the fifth day of the fifth month). When she was presented a selection of experimental scents as potential choices for the first perfume to bear the Chanel name, she chose the sample in the fifth vial. Chanel instructed that the “sample number 5” should keep its name, asserting that it would bring the scent good luck.

7. Sharp cheese BLEU
The mold on blue cheese is actually from the genus Penicillium, the same genus of mold that is the source of many antibiotics.

9. Joint: Pref. ARTHRO-
The prefix “arthro-” meaning “pertaining to the joints” comes from the Greek “arthron”, the word for “joint”.

12. Fluoride, for one ION
Fluoridation is the addition of a fluoride salt to the public drinking water system, a measure taken to reduce tooth decay. What I find interesting is that bottled water usually has no added fluoride, and most domestic water filters remove the fluoride from the water coming out of the faucet. Maybe that explains why my dental hygienist has started applying a fluoride varnish to my teeth …

21. Soprano Mitchell LEONA
Leona Mitchell is an operatic soprano from Enid, Oklahoma. Mitchell has performed with each of the Three Tenors in separate productions: in “Emani” with Luciano Pavarotti, in “Turandot” with Placido Domingo, and in “Carmen” with Jose Carreras.

22. Protective cover TARP
Originally, tarpaulins were made from canvas covered in tar that rendered the material waterproof. The word “tarpaulin” comes from “tar” and “palling”, with “pall” meaning “heavy cloth covering”.

29. Dip option SALSA
“Salsa” is simply the Spanish for “sauce”.

39. Where Yankee Doodle’s feather ended up IN HIS HAT

Yankee Doodle came to town
Riding on a pony;
He stuck a feather in his hat,
And called it macaroni

40. 1985 Malkovich film ELENI
Nicholas Gage is a Greek-American author and investigative journalist. Gage wrote two memoirs, “Eleni” and “A Place for Us”. “Eleni” tells of his life in Greece during WWII and the Greek Civil War. The title is a tribute to his mother Eleni who was executed by Communists who occupied her village, simply because she helped her children escape from the ravages of a war of occupation. “Eleni” was adapted into a movie in 1985, with John Malkovich playing Gage.

43. Shortly ANON
“Anon” originally meant “at once” and evolved into today’s meaning of “soon” apparently just because the word was misused over time.

48. Certain young lover, facetiously BOY TOY
That would be me …

54. Bach’s “The __ Fugue” ART OF
“The Art of Fugue” is a collection of 14 fugues and 4 canons composed by Johann Sebastian Bach in the last decade of his life, and which was left unfinished.

A fugue is similar to a round in that it is a piece written for two or more voices, with themes that are introduced and taken up by different voices at different pitches. The most famous composer of fugues has to be Bach.

57. Poet friend of T.S. EZRA
Ezra Pound was an American poet who spent much of his life wandering the world, spending years in London, Paris, and Italy. In Italy, Pound’s work and sympathies for Mussolini’s regime led to his arrest at the end of the war. His major work was the epic, albeit incomplete, “The Cantos”. This epic poem is divided into 120 sections, each known as a canto.

The author T. S. Eliot was the son of Henry Ware Eliot and Charlotte Champe Stearns, so his full name was Thomas Stearns Eliot (TSE).

61. Vintage roadster REO
The REO Motor Company was founded by Ransom E. Olds (hence the name REO). The company made cars, trucks and buses, and was in business from 1905 to 1975 in Lansing, Michigan. Among the company’s most famous models were the REO Royale and the REO Flying Cloud.