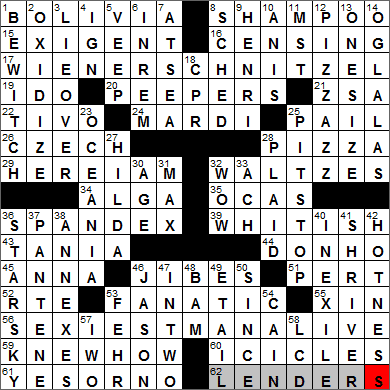 Today’s Wiki-est, Amazonian Googlies
Across
1. Lake Titicaca forms part of its border BOLIVIA
Lake Titicaca is the largest lake in South America, and the highest navigable lake in the world (navigable by “large” commercial vessels). Lake Titicaca is located in the Andes, on the border between Peru and Bolivia.

8. Rug treatment SHAMPOO
Back in the 1760s, the verb “shampoo” was an Anglo-Indian word meaning “to massage”. A century later we started to shampoo our hair.

16. Performing a spiritual ritual CENSING
“To cense” is to perfume with incense. Such a lovely word …

17. Traditional Austrian dish WIENER SCHNITZEL
Schnitzel is an Austrian dish made from slices of meat that have been tenderized and thinned with a wooden mallet, and then coated in breadcrumbs and fried. The variant known as Wiener Schnitzel (i.e. Viennese schnitzel) is usually made from veal, although now that veal had fallen into disfavor due to concerns about animal rights, it is often made from pork.

21. Half a Gabor? ZSA
Zsa Zsa Gabor is a Hungarian American actress, born in Budapest as Sári Gábor (the older sister of the actress Eva). Zsa Zsa Gabor has been married a whopping nine times, including a 5-year stint with Conrad Hilton and another 5 years with the actor George Sanders. One of Gabor’s famous quips was that she was always a good housekeeper, as after every divorce she kept the house!

22. It can help you avoid ads TIVO
TiVo was introduced in 1999 and was the world’s first commercially successful DVR (Digital Video Recorder).

24. __ Gras MARDI
“Mardi Gras” translates from French as “Fat Tuesday”, and gets its name from the practice of eating rich foods on the eve of the fasting season known as Lent. Lent starts on the next day, called Ash Wednesday.

26. Bohemia native CZECH
Bohemia covers most of the Czech Republic. Centuries ago, it was wrongly believed that gypsies came from Bohemia, giving rise to the term “Bohemian” meaning a “gypsy of society”.

28. Food often served in chains PIZZA
Pizza was invented in Naples where it has a long tradition that goes back to Ancient Rome. During an 1889 visit to Naples, Queen Margherita of Savoy was served a special pizza that was created with toppings designed to mimic the colors of the Italian flag. The ingredients of tomato (red), mozzarella (white) and basil (green) can still be found together on menus today on a pie usually named Pizza Margherita after the queen. I do love basil on my pizza …

34. Anabaena or chlorella ALGA
Algae are similar to terrestrial plants in that they use photosynthesis to create sugars from light and carbon dioxide, but they differ in that they have simpler anatomies, and for example lack roots.

35. Andean root vegetables OCAS
The plant called an oca is also known as the New Zealand Yam. The tubers of the oca are used as a root vegetable.

36. Cyclist’s wear SPANDEX
What we call spandex in the US is known as Lycra in the British Isles. “Spandex” was chosen as the name for the elastic fiber as it is an anagram of “expands”.

43. Patty Hearst’s SLA alias TANIA
The Symbionese Liberation Army (SLA) was founded in 1973 by an escapee of the prison system, Donald DeFreeze. The group’s manifesto promoted the rights of African Americans although, in the 2-3 year life of the group, DeFreeze was the only black member. Famously, the SLA kidnapped heiress Patty Hearst in 1974. Hearst apparently fell victim to what is called the Stockholm syndrome and became sympathetic to her captors’ cause. She joined the SLA and assumed the name “Tania”.

44. “Pearly Shells” singer DON HO
Don Ho apparently had a pretty liberal arrangement with his wife. When Ho was touring with his two backing singers, Patti Swallie and Elizabeth Guevara, all three of them shared a room together. He had two children with each of his roommates, giving a total of ten kids including the six he had with his wife. The arrangement was quite open, it seems, with all ten kids visiting each other regularly. To each his own …

56. Annual People feature SEXIEST MAN ALIVE
“People” magazine is noted for its annual special editions with features such as “Best & Worst Dressed” and “Sexiest Man Alive”. The “Sexiest Man Alive” edition now appears at the end of November each year. The first choice for “Sexiest Man” was Mel Gibson, in 1985. The 2013 choice was singer-songwriter Adam Levine.

9. ’50s-’70s Montreal Canadiens star __ Richard HENRI
Henri Richard is a former ice hockey player who turned out for the Montreal Canadiens from 1955 to 1975. Henri was the brother of Maurice Richard, who also played for the Canadiens. Maurice was known as “the Rocket”, and the younger and shorter Henri was nicknamed “the Pocket-Rocket”.

10. Spanish cordial ANIS
Anis is a Spanish liqueur, equivalent to what’s called anisette in other countries (in France, for example). It has a licorice taste as it is produced by distilling the seeds of the anis plant. Like all anis-type drinks, it is usually mixed with water and turns a milky white color when the water is added.

14. Crazy Horse and Red Cloud OGLALAS
The Oglala are a sub-tribe of the Lakota Native American people.

Red Cloud was a chief of the Oglala Lakota Native American people. Red Cloud led his tribe in battles with the US Army in the Wyoming and Montana territories between 1866 and 1868, a conflict that the Army came to call Red Cloud’s War.

George Orwell’s famous novel actually has the title “Nineteen Eighty-Four” (as opposed to “1984”), with the date spelled out.

27. “Broom-__”: comic strip HILDA
“Broom-Hilda” is a comic strip created by Russell Myers that has been running since 1970. The idea for Broom-Hilda came from Myers’s business manager, Elliot Caplin (brother of Al Capp, the creator of “Li’l Abner”).

28. Geometric pattern PLAID
Tartan is sometimes called “plaid” over here in the US, a word not used in the same sense outside of this country. In Scotland a “plaid” is a blanket or a tartan cloth slung over the shoulder.

The river running through Germany that we know in English as the Rhine, is called “Rhein” in German.

36. 2004 Stiller title role STARSKY
The 2004 film “Starsky & Hutch” is of course an adaptation of the seventies TV cop show of the same name. Ben Stiller and Owen Wilson play the leads in the movie, and as you may recall the TV show starred Paul Michael Glaser and David Soul.

Ben Stiller is the son of actors Jerry Stiller and Anne Meara. Ben is perhaps as well-known as a director as he is an actor. He made his debut as a director in the film “Reality Bites” in 1994.

37. Pro-V hair care brand PANTENE
The hair care product line called Pantene was introduced in the late 1940s in Europe, but has been owned by Procter & Gamble since the 80s. The name “Pantene” was chosen as one of the main ingredients was the alcohol called panthenol.

41. McGovern’s running mate SHRIVER
Sargent Shriver was the running mate of George McGovern, the Democratic nominee for US President in the 1972 race. Shriver was a member of the Kennedy clan, as he was married to Eunice Kennedy, sister to President John F. Kennedy. Among Shriver’s many roles in public life, he was the man behind the founding of the Peace Corps.

George McGovern ran as the Democratic candidate in the 1972 presidential election, losing to Richard Nixon in a landslide. McGovern also served in the US House of Representatives from 1957 to 1961 and in the US Senate from 1963 to 1981, representing his home state of South Dakota.

46. Bourne of Ludlum’s novels JASON
“The Bourne Identity” is a great spy novel written by Robert Ludlum, first published in 1980. It has been ranked as the second best spy novel of all time, just behind the even more enjoyable “The Spy Who Came in from the Cold” by John le Carre. Ludlum wrote two sequels, and all three parts of “The Bourne Trilogy” have been made into very successful movies starring Matt Damon in the title role. Ludlum died before he could write more than three novels featuring Jason Bourne, but five more titles in the series have been published, written by Eric Van Lustbader. I must check them out …

49. .biz biz ETAIL
“Etail” is the term used these days for online shopping. Etail is often compared to regular shopping in the “real world” by juxtaposing it with a “brick and mortar” store.

57. Iconic Japanese island, familiarly IWO
Iwo Jima is a volcanic island located south of Tokyo that today is uninhabited. There were about a thousand Japanese civilians living on the island prior to WWII. In 1944, there was a massive influx of Japanese military personnel in anticipation of the inevitable US invasion. As the Japanese military moved in, the civilians were forced out and no one has lived there since.