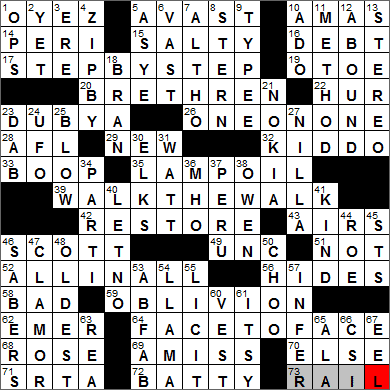 CROSSWORD SETTER: Matt Skoczen
THEME: Echoes … each of today’s answers is a little repetitive, in the sense that the first part of the answer is the same as the last:

17A. Gradually and steadily STEP-BY-STEP
26A. Like a private tutoring session ONE-ON-ONE
39A. Back up talk with action WALK THE WALK
52A. Considering everything ALL IN ALL
64A. In person FACE-TO-FACE

5. Captain’s order to stop AVAST
“Avast” is a nautical term used to tell someone to stop or desist from what they are doing. The word comes from the Dutch “hou vast” meaning “hold fast”.

14. Prefix with scope or meter PERI-
The prefix “peri-” is Greek in origin and means “around”. An example of its use is “periscope”, a device on a submarine for looking “around”.

15. Like many pretzels SALTY
Pretzels originated in Europe and are especially popular in Southern Germany where a pretzel is known as “Brezel”. Pretzels were introduced into the US in the 1800s by immigrants from Germany and Switzerland who came to be known over here as the Pennsylvania Dutch.

22. “Ben-__” HUR
The celebrated Charlton Heston movie “Ben-Hur” is a dramatization of a book published in 1880 by Lew Wallace titled “Ben-Hur: A Tale of Christ”. The 1959 epic film won a record 11 Academy Awards, a feat that has been equaled since then but has never been beaten. The other winners of 11 Oscars are “Titanic” and “The Lord of the Rings: The Return of the Rings”.

28. CIO partner AFL
The American Federation of Labor (AFL) was founded in 1886, making it one of the first federations of unions in the country. Over time the AFL became dominated by craft unions, unions representing skilled workers of particular disciplines. In the early thirties, John L. Lewis led a movement within the AFL to organize workers by industry, believing this would be more effective for the members. But the craft unions refused to budge, so Lewis set up a rival federation of unions in 1932 called the Congress of Industrial Organizations (CIO). The two federations became bitter rivals for over two decades until finally merging in 1955 to form the AFL-CIO.

33. Betty of cartoons BOOP
Betty Boop made her first appearance on the screen in 1930, in a cartoon called “Dizzy Dishes”. Her character was modeled on the the It-girl, the sexy Clara Bow of movie fame. Back then Betty Boop was a sexy poodle and it wasn’t until 1932 that she morphed into completely human form. Betty was quite the risqué figure, but her vampish ways only lasted a few years. When the Production Code of 1934 came into force, Betty started to dress more modestly and toned down her behavior.

46. “Ivanhoe” author Sir Walter SCOTT
Sir Walter Scott was a Scottish novelist and playwright, the first English-language author to gain popularity around the world during his own lifetime. The most famous of his works are “Ivanhoe”, “Rob Roy” and “The Lady of the Lake”.

49. The Tar Heels of the NCAA UNC
Tar Heel is a nickname for anyone living in, or from, the state of North Carolina. As such, it is the nickname also of the athletic teams of the University of North Carolina. No one seems to know for sure where the term “Tar Heel” originated, but it is thought to be related to the historical importance of the tar, pitch and turpentine industries that thrived in the state due to the presence of vast forests of pine trees.

51. Forget-me-__ NOT
The plants known as forget-me-nots were given their distinctive name first in French, namely “ne m’oubliez pas”. “Forget-me-not” is simply a translation into English.

72. Eccentric BATTY
The expression “bats in the belfry” meaning “mad, crazy” conjures up images of bats flying around Gothic bell towers, but actually it’s a relatively recent addition to our vernacular. The term is American in origin, and dates back only to the early 1900s. The concept is that someone who is “crazy”, with wild ideas flying around his or her head, can be described as having bats (wild ideas) flying around the belfry (head). The terms “bats” and “batty” originated at the same time, and are clearly derivative.

Down
1. Chances to get pics OPS
A “photo op” is an opportunity to take a memorable photograph, one that is often arranged for professional photographers to get a picture of a celebrity.

5. “__ sow, so shall …” AS YE
The commonly quoted line “As ye sow, so shall ye reap” is not actually a direct quote from the Bible, although the sentiment is expressed there at least twice. In the Book of Job is the line “They that plow iniquity, and sow wickedness, reap the same”. In the Epistle of Paul to the Galatians is the line “Be not deceived; God is not mocked: for whatsoever a man soweth, that shall he also reap”.

8. Violinist Isaac STERN
Isaac Stern is Ukrainian-born, but moved with his family to San Francisco at a very young age. He is a wonderful violin virtuoso who I’ve had the pleasure of hearing live on just the one occasion …

9. Melville work subtitled “A Peep at Polynesian Life” TYPEE
Herman Melville mined his own experiences when writing his novels. Melville sailed from New Bedford, Massachusetts in 1841 on a whaler heading into the Pacific Ocean (a source for “Moby Dick”). Melville ended up deserting his ship 18 months later and lived with natives on a South Pacific Island for three weeks (a source for “Typee”). He picked up another whaler and headed for Hawaii, where he joined the crew of a US navy frigate that was bound for Boston (a source for “Omoo”).

10. “Much __ About Nothing” ADO
“Much Ado About Nothing” is a favorite of mine, a play of course by William Shakespeare. It is a comedic tale of two pairs of lovers with lots of mistaken identities and double meanings. I once saw it performed in the fabulous Globe Theatre in London … by an all-female cast!

13. Audio system STEREO
Monophonic sound (“mono”) is sound reproduced using just one audio channel, which is usually played out of just one speaker. Stereophonic sound is reproduced using two audio channels, with the sound from each channel played out of two different speakers. The pair of stereo speakers are usually positioned apart from each other so that sound appears to come from between the two. Quadraphonic sound (4.0 surround sound) uses four audio channels with the sound played back through four speakers often positioned at the corners of the room in which one is listening.

21. Finnish mobile phone giant NOKIA
I do enjoy classical guitar music, but there isn’t a huge choice on CD. There is one very special piece called “Gran Vals” by Francisco Tárrega, written in 1902. This piece has a unique reputation as it contains a phrase that it is the most listened to piece of music in the whole world. Just a few bars into the work one can hear the omnipresent Nokia ring tone!

27. Nabisco wafer brand NILLA
As one might expect, Nilla is a shortened from of “vanilla”. However, you won’t find any vanilla in Nilla cookies or wafers. They have always been flavored with vanillin, synthetic vanilla. Is nothing sacred …?

31. “W” on a light bulb WATT
James Watt was a Scottish inventor, a man who figured prominently in the Industrial Revolution in Britain largely due to the improvements he made to the fledgling steam engine. The SI unit of power is called the watt, named in his honor.

37. Lima’s land PERU
Lima is the capital city of Peru. Lima was founded in 1535 by the Spanish conquistador Francisco Pizarro who named it “la Ciudad de los Reyes” (the City of Kings). Pizarro chose this name because the decision to found the city was made on January 6th, the feast of the Epiphany that commemorates the visit of the three kings to Jesus in Bethlehem.

“Marley & Me” is a 2008 film adaptation of a memoir of the same name by John Grogan. Owen Wilson plays the author in the movie, which tells the story of Grogan and his his energetic dog called Marley. The film was released on December 25, 2008 and held the record for biggest Christmas Day box office ever.

40. “… __ man put asunder” LET NO
The Christian marriage ceremony usually includes the words, “What God has joined together let no man put asunder”. This line comes from the Gospel of Matthew in the New Testament.

44. __ v. Wade ROE
Roe v. Wade was decided in a US District Court in Texas in 1970, and reached the Supreme Court on appeal. The basic decision by the Supreme Court was that a woman’s constitutional right to privacy applied to an abortion, but that this right had to be balanced with a state’s interest in protecting an unborn child and a mother’s health. The Court further defined that the state’s interest became stronger with each trimester of a pregnancy. So, in the first trimester the woman’s right to privacy outweighed any state interest. In the second trimester the state’s interest in maternal health was deemed to be strong enough to allow state regulation of abortion for the sake of the mother. In the third trimester the viability of the fetus dictated that the state’s interest in the unborn child came into play, so states could regulate or prohibit abortions, except in cases where the mother’s life was in danger. I’m no lawyer, but that’s my understanding of the initial Supreme Court decision …

46. Cavalry blades SABERS
A saber is a sword with a curved blade and a relatively large hand guard. It is thought that the term originated with the Hungarian verb “szabni” meaning “to cut”.

54. Andes pack animal LLAMA
The wool from a llama is much softer than that from a sheep, and it is also free from lanolin.

60. Sleeveless garment VEST
Here’s another word that often catches me out. What we call a vest in the US is a waistcoat back in Ireland. And the Irish use the word “vest” for an undershirt.

63. “The Crying Game” actor Stephen REA
Stephen Rea is an Irish actor, whose most famous role was that of the “retired” IRA man in the brilliant 1992 film “The Crying Game”. He also starred in the chilling movie “Stuck”, a 2007 film that is based on a true story about a woman who commits a hit and run on a homeless man. The woman leaves the scene of the crime with the victim still “stuck” in her windshield. The woman then leaves the man to die in her garage. Chilling, eh? But as I said, a true story …

“The Crying Game” is a fascinating film that made quite a splash when it was released in 1992. Although it was set in Ireland and the UK, it didn’t do well in cinemas in either country yet made a lot of money over here in the US. I think the politics of the movie were a bit raw for Irish and UK audiences back then. It’s an unusual plot, blending Irish political issues with some raw sexuality questions. I won’t tell you about the “surprise scene”, just in case you haven’t seen it and want to do so.

65. Pie __ mode A LA
In French, “à la mode” simply means “fashionable”. In America, the term has come to describe a way of serving pie, usually with ice cream, or as I recall from when I lived in Upstate New York, with cheese.

66. CBS series with Miami and NY spin-offs CSI
The “CSI” franchise of TV shows has been tremendously successful, but seems to be winding down. “CSI: Miami” (the “worst” of the franchise, I think) was cancelled in 2012 after ten seasons. “CSI: NY” (the “best” of the franchise) was cancelled in 2013 after nine seasons. The original “CSI: Crime Scene Investigation”, set in Las Vegas, is still going strong and has been doing so since 2000.