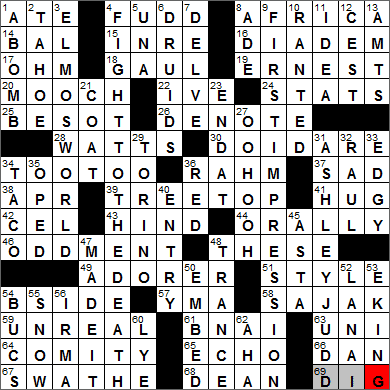 CROSSWORD SETTER: Jeffrey Wechsler
THEME: Tree Tops … each of today’s themed answers is written in the down direction, and there’s a type of TREE right at the TOP:

Today’s Wiki-est, Amazonian Googlies
Across
4. Cartoon huntsman FUDD
Elmer Fudd is one of the most famous of all the Looney Tunes cartoon characters, the hapless nemesis of Bugs Bunny. If you have never seen it, check out Elmer and Bugs in the marvelous “Rabbit of Seville”, a short cartoon that parodies Rossini’s “Barber of Seville”. Wonderful stuff …

14. __ Harbour, Fla. BAL
Bal Harbour is a village in Florida that is located on the northern tip of the barrier island usually known as Miami Beach.

16. Jeweled headgear DIADEM
A diadem is a type of crown that is worn as a sign of royalty. The original “diadem” wasn’t made of metal and was simply an embroidered slik ribbon that was worn by a king as a symbol of his authority.

17. Electrical unit OHM
The unit of electrical resistance is the ohm (with the symbol omega) named after German physicist Georg Simon Ohm. Ohm was the guy who established experimentally that the amount of current flowing through a circuit is directly proportional to the voltage applied, (V=IR) a relationship that every school kid knows as Ohm’s Law.

18. France, in the time of the 6-Down GAUL
The Gauls were a Celtic race, with Gaul covering what is now known as France and Belgium.

19. Julio’s partner in wine ERNEST
E J Gallo Winery was founded by Ernest and Julio Gallo in Modesto, California in 1933. Gallo is the largest exporter of wine from the State of California.

28. Power units WATTS
James Watt was a Scottish inventor, a man who figured prominently in the Industrial Revolution in Britain largely due to the improvements he made to the fledgling steam engine. The SI unit of power is called the watt, named in his honor.

36. First name in Chicago politics RAHM
The current Mayor of Chicago, Rahm Emanuel, was an Illinois representative in the US House before resigning to take up President Obama’s offer to become the White House Chief of Staff.

38. Good Friday mo., often APR
Good Friday is a holiday observed by Christians that commemorates the crucifixion of Jesus Christ. Good Friday is part of Holy Week, which is the last week of Lent and which starts with Palm Sunday and ends with Holy Saturday. The term “Good Friday” might be a corruption of “God Friday”, but this etymology is contested.

39. Lullaby setting, and a hint to the starts of 3-, 4-, 9- and 31-Down TREETOP
“Rock-a-Bye Baby” is a lullaby, the history of which is much debated. Some say it originated in England, and others claim that it was the first poem that was written on American soil.

42. 4-Across frame CEL
(4A. Cartoon huntsman FUDD)
In the world of animation, a cel is a transparent sheet on which objects and characters are drawn. In the first half of the 20th century the sheet was actually made of celluloid, giving the “cel” its name.

43. Golden __: Drake’s ship HIND
Sir Francis Drake was a Vice-Admiral in the Elizabethan navy, and second in command when the Royal Navy defeated the Spanish Armada. He was also a sanctioned pirate for the Queen and wreaked havoc on the Spanish merchant fleet. His most famous ship was the Golden Hind, in which he circumnavigated the world between 1577 and 1580.

44. How aspirin is taken ORALLY
Aspirin was a brand name for the drug acetylsalicylic acid. Aspirin was introduced by the German drug company Bayer AG in the late 1800s. As part of the war reparations paid by Germany after WWI, Bayer AG lost the use of the trademark “Aspirin” (as well as the trademark Heroin!) and it became a generic term.

48. “We hold __ truths …” THESE
The second paragraph of the Declaration of Independence starts with:
We hold these truths to be self-evident, that all men are created equal, that they are endowed by their Creator with certain unalienable Rights, that among these are Life, Liberty and the pursuit of Happiness.

51. Art nouveau, say STYLE
Art Nouveau (French for “new art”) is a style that was popular from 1890 to 1910. Although the English-speaking world adopted the French name for the style, Art Nouveau was known as “Jugendstil” in Germany, “Modern” in Russia and “Stile Liberty” in Italy.

57. Sumac of song YMA
Yma Sumac was a Peruvian soprano. Sumac had a notable vocal range of five octaves.

58. Man of letters? SAJAK
Pat Sajak took over the hosting of “Wheel of Fortune” back in 1983 and has been doing the job ever since. Sajak had a short run as a talk show host in 1989/1990 and used to sub quite often for Larry King and Regis Philbin.

63. Down Under school UNI
In Australia (Down Under) and in the British Isles the term “Uni” is routinely used for “university”.

64. Mutual respect COMITY
“Comity” is an atmosphere of social harmony and mutual respect. The term derives from the Latin “comitas” meaning “courtesy”.

2. Lake bordering the Silver and Golden states TAHOE
Lake Tahoe is up in the Sierra Nevada mountains, right on the border between California and Nevada. Lake Tahoe is the largest alpine lake in the country. It’s also the second deepest lake, with only the beautiful Crater Lake in Oregon being deeper. Given its location, there are tall casinos that sit right on the shore on the Nevada side of the state line where gambling is legal.

5. Actress Merkel UNA
Una Merkel was an actress from Covington, Kentucky who appeared on stage and in film. Merkel was often cast as the best friend of the leading character, a friend with a sense of humor. I remember her as Sam Spade’s secretary in 1931’s “The Maltese Falcon”. Merkel also played a famous “cat fight” scene with Marlene Dietrich in 1939’s “Destry Rides Again”.

29. Città on the Po TORINO
In Italian, Turin (Torino) is a city (città) on the Po River.

Turin (“Torino” in Italian) is a major city in the north of Italy that sits on the Po River. Back in 1861, when the Kingdom of Italy was formed, Turin was chosen as the first capital of the country .

31. “Dolphin Tale” co-star ASHLEY JUDD
The lovely actress Ashley Judd if the daughter of country music singer Naomi Judd, and is half-sister to singer Wynonna Judd. I remember seeing Judd in a couple of episodes of “Star Trek: The Next Generation” from 1991. Those appearances marked her television debut. Her feature film debut came the following year in a movie called “Kuffs”.

“Dolphin Tale” is a 2011 movie that is inspired by the true story of a bottlenose dolphin in Florida that was rescued after her tail was lost when entangled in a crab trap. The dolphin was fitted with a prosthetic tail, which saved her life. Stars of the film are Harry Connick, Jr. and Ashley Judd. If you’re interested, there’s a “Dolphin Tale 2” set for release in 2014.

32. Castro of Cuba RAUL
Raúl Castro is the younger brother of Fidel Castro. Raúl has been President of Cuba since 2008, when Fidel stepped aside.

40. Sweepstakes mail-in ENTRY
A “sweepstakes” is a lottery in which the participants pay into a fund that becomes the prize. The term “sweepstakes” comes from the Middle English word “swepestake”, the name for the person who “sweeps up” all the stakes in a game.

45. Sleuthing films canine ASTA
Asta is the wonderful little dog in the superb movie “The Thin Man” starring William Powell and Myrna Loy (as Nick and Nora Charles). In the original story by Dashiell Hammett, Asta was a female Schnauzer, but on screen Asta was played by a wire-haired fox terrier called “Skippy”. Skippy was also the dog in “Bringing up Baby” with Cary Grant and Katharine Hepburn, the one who kept stealing the dinosaur bone. Skippy retired in 1939, so Asta was played by other dogs in the remainder of “The Thin Man” films.

52. Island only 2% owned by Hawaii LANAI
Lanai is the sixth largest of the Hawaiian Islands. Lanai was first spotted by Europeans just a few days after Captain Cook was killed on the Big Island of Hawaii in 1779. In 1922, the Hawaiian Pineapple Company bought the whole island of Lanai and turned most of it into the world’s largest pineapple plantation. Since then, Lanai has been known as “The Pineapple Island”. Today, 98% of the island is owned by Larry Ellison, the CEO of Oracle, and 2% is owned by the State of Hawaii.

54. Tampa NFL team BUCS
The Tampa Bay Buccaneers joined the NFL in 1976 along with the Seattle Seahawks as expansion teams. The Bucs had a tough start in the NFL, losing their first 26 games. Things went better in the early eighties, but then the team went through 14 consecutive losing seasons. Their luck changed again though, and they won the Super Bowl at the end of the 2002 season.

60. Pipe cleaner LYE
Today when we purchase what is labelled as “lye”, it is caustic soda (sodium hydroxide). Historically, the term “lye” was used for the related chemical potassium hydroxide.