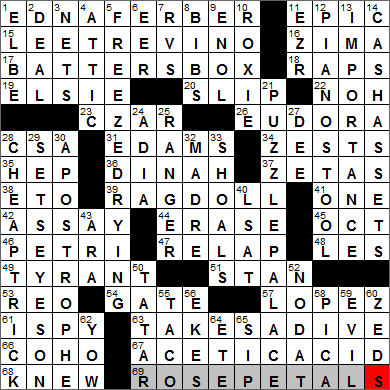 Today’s Wiki-est, Amazonian Googlies
Across
1. “Giant” novelist EDNA FERBER
Edna Ferber was a novelist and playwright from Kalamazoo, Michigan. Ferber won a Pulitzer for her novel “So Big”, which was made into a film a few times, most famously in 1953 starring Jane Wyman.

“Giant” is a 1952 novel by author Edna Ferber. It was adapted into a successful Hollywood movie released in 1956. In the film, Bick Benedict (played by Rock Hudson) marries Leslie (played by Elizabeth Taylor) and takes his new wife home to the family ranch in Texas called Reata. The ranch’s handyman is Jett Rink, played by James Dean. Dean was killed in a car accident before the film was released. Some of of Dean’s line needed work before the film could be released and so another actor had to do that voice-over work.

15. 1971 Sports Illustrated Sportsman of the Year LEE TREVINO
Lee Trevino is an American golfer of Mexican descent, and so has the nicknames “The Merry Mex” and “Supermex”. He is well known for his great sense of humor and for playing pranks on the golf course. For many years when he played he wore a Band-Aid on his arm, covering the tattoo with the name of his ex-wife.

16. MillerCoors brand ZIMA
Zima is a clear alcoholic beverage with about the same strength as beer. Zima is sold in beer bottles but is marketed as “not” a beer. It has a lemon-lime flavor and is referred to as an “alcopop”, a portmanteau word from “alcohol” and “pop”.

19. Pitcher of milk? ELSIE
Elsie the Cow is the mascot of the Borden Company. Elsie first appeared at the New York World’s Fair in 1939, introduced to symbolize the perfect dairy product. Elsie was also given a husband named Elmer the Bull. Elmer eventually moved over to the chemical division of Borden where he gave his name to Elmer’s Glue.

22. Japanese drama NOH
Noh is a form of musical drama in Japan that has been around since the 14th century. Many of the Noh performers are masked, allowing all the roles to be played by men, both male and female parts.

23. Kingpin CZAR
The term czar (also tsar) is a Slavic word that was first used as a title by Simeon I of Bulgaria in 913 AD. “Czar” is derived from the word “Caesar”, which was synonymous with “emperor” at that time.

26. Email program named for a writer EUDORA
Eudora is an email program that comes with Apple operating systems. The program is named for American author Eudora Welty.

Eudora Welty was an author from Jackson, Mississippi who wrote short stories and novels about the American South. Welty won a Pulitzer in 1973 for her novel “The Optimist’s Daughter”. She was also awarded the Presidential Medal of Freedom, in 1980.

31. Cheese shop offerings EDAMS
Edam cheese takes its name from the Dutch town of Edam in North Holland. The cheese is famous for its coating of red paraffin wax, a layer of protection that helps Edam travel well and prevents spoiling. You might occasionally come across an Edam cheese that is coated in black wax. The black color indicates that the underlying cheese has been aged for a minimum of 17 weeks.

35. With it HEP
The slang term “hep” meaning “cool” has the same meaning as the later derivative term “hip”. The origins of “hep” seem unclear, but it was adopted by jazz musicians of the early 1900s.

36. Daughter of Jacob and Leah DINAH
According to the Hebrew Bible and the Christian Old Testament, Dinah was the daughter of Jacob and Leah. The story of “the rape of Leah” is told in the Book of Genesis. Leah was abducted and violated by a Canaanite prince. In retribution, Leah’s brothers, Simeon and Levi, killed the prince, the prince’s father, and all the males in the city where the prince resided.

37. Letters from Greece ZETAS
Zeta is the sixth letter of the Greek alphabet, and is a precursor of our Roman letter Z. The word “zeta” is also the ancestor of the name “zed”, which became “zee”, the pronunciation that we use here in the US.

39. Traditional Amish toy RAG DOLL
The Amish are a group of Christian churches, a sub-group of the Mennonite churches. The Amish church originated in Switzerland and Alsace in 1693 when it was founded by Jakob Ammann. It was Ammann who gave the name to the Amish people. Many Amish people came to Pennsylvania in the 18th century.

45. 10, at times: Abbr. OCT
October is the tenth month in our calendar but was the eighth month in the old Roman calendar, hence the name “Octo-ber”. Back then there were only ten months in the year. “Ianuarius” (January) and “Februarius” were then added as the eleventh and twelfth months of the year. Soon after, the year was reset and January and February became the first and second months.

46. Eponymous German bacteriologist PETRI
Julius Richard Petri was a German bacteriologist and was the man after whom the Petri dish is named. The petri dish can have an agar gel on the bottom which acts a nutrient source for the specimen being grown and studied, in which case the dish plus agar is referred to as an “agar plate”.

51. Lee of Marvel Comics STAN
Stan Lee did just about everything at Marvel Comics over the years, from writing to being president and chairman of the board. If you like superhero movies based on the characters from Marvel Comics, then you could spend a few hours trying to spot Stan Lee in those films as he has a penchant for making cameo appearances. Lee can be spotted in “X-Men” (2000), “Spider-Man” (2002), “Hulk” (2003), “Fantastic Four” (2005), “Iron Man” (2008) and many more.

53. Flying Cloud, e.g. REO
The REO Motor Company was founded by Ransom E. Olds (hence the name REO). The company made cars, trucks and buses, and was in business from 1905 to 1975 in Lansing, Michigan. Among the company’s most famous models were the REO Royale and the REO Flying Cloud.

54. Proceeds GATE
The proceeds at say a sports event is referred to as “the gate”.

57. Ruy __: chess opening LOPEZ
A gambit is a chess opening that intrinsically involves the sacrifice of a piece (usually a pawn) with the intent of gaining an advantage. The term “gambit” was first used by the Spanish priest Ruy Lopez de Segura who took it from the Italian expression “dare il gambetto” meaning “to put a leg forward to trip someone”. Said priest gave his name to the common Ruy Lopez opening, which paradoxically is not a gambit in that there is no sacrifice.

66. Pacific salmon COHO
The Coho salmon is silver along the side of its body, but only during the phase of its life while it is in the ocean. When spawning and heading up into a freshwater river, the Coho has bright red sides.

67. Compound used in photographic film production ACETIC ACID
Acetic acid has the formula CH3COOH, and is the main component of vinegar.

Down
1. Dresden’s river ELBE
The River Elbe rises in the Czech Republic and travels over a thousand kilometers before emptying into the North Sea near the port of Hamburg in Germany.

The German city of Dresden was almost completely destroyed during WWII, especially as a result of the famous firebombing of the city in 1945. Restoration work in the inner city in recent decades led to it being designated as a UNESCO World Heritage Site However, in 2006 when the city built a highway bridge close to the city center, UNESCO took Dresden off the list. This marked the only time a European location has lost World Heritage status.

3. Brooklyn team NETS
The NBA’s Brooklyn Nets until relatively recently were the New Jersey Nets based in Newark. Prior to 1977, the team was known as the New York Nets and played in various locations on Long Island. Ten years earlier, the Nets were called the New Jersey Americans and were headquartered in Teaneck, New Jersey.

9. Hydroxyl compound ENOL
An enol is an alkene with a hydroxyl group, sort of part-alkene and part-alcohol. The term “enol” therefore, is a portmanteau of “alkene” and “alcohol”.

10. “Chicago” song ROXIE
The wonderful 1975 musical “Chicago” is based on a 1926 play of the same name written by a news reporter called Maurine Dallas Watkins. Watkins had been assigned to cover the murder trials of Beulah Annan and Belva Gaertner for the “Chicago Tribune”, and used the story that unfolded as the basis for her play. Annan became the character Roxie Hart, and Gaertner became Velma Kelly. I’ve only ever seen the movie version of “Chicago” and never a live performance …

11. Book before Neh. EZR
In the Hebrew Bible, the Book of Ezra was originally combined with the Book of Nehemiah, with the two being separated in the early days of the Christian Era.

21. 1982 James Bamford book about the NSA, with “The” PUZZLE PALACE
“The Puzzle Palace” is a 1982 book by James Bamford book that deals with the history of the National Security Agency (NSA). As perhaps might be expected, release of the book was fraught with controversy. The Reagan administration threatened legal action if Bamford did not return classified documents that the government claimed were released in error. Those documents dealt with the illegal monitoring of domestic communication and surveillance of Americans without a warrant.

24. Song on Sarah McLachlan’s “Surfacing” album ADIA
Apparently the song “Adia”, co-written by Sarah McLachlan, was intended as an apology to her best friend … for stealing her ex-boyfriend and then marrying him!

27. Two-point Scrabble tile DEE
The game of Scrabble has been produced in many international versions, and each of these editions has its own tile distribution to suit the local language. For example, in English we have two tiles worth ten points: one “Q” and one “Z”. If you play the game in French then there are five tiles worth ten points: one “K”, one “W”, one “X”, one “Y” and one “Z”.

28. “The Flame” band CHEAP TRICK
Cheap Trick is a rock band from Illinois that was formed in 1973. Such is the band’s popularity that in 2007, the Illinois Senate declared that April 1 every year would be Cheap Trick Day.

32. Sierra __ MADRE
“The Treasure of the Sierra Madre” is a 1927 novel by German novelist B. Traven. The book was made into a famous 1948 movie of the same name by John Huston, starring Humphrey Bogart and Walter Huston (director John’s father).

33. Isles of __: Gulf of Maine locale SHOALS
The Isles of Shoals are a group of islands that lie right on the border between Maine and New Hampshire, just 6 miles off the coast.

40. Quarterly half-day exam LSAT
The Law School Admission Test (LSAT) has been around since 1948.

43. Constellation next to Scorpius ARA
The constellation of Ara takes its name from the Latin word for “altar”.

50. Volga region native TATAR
Tatars are an ethnic group of people, mainly residing in Russia (a population of about 5 1/2 million). Actor Charles Bronson had a Tatar heritage. Bronson’s real name was Charles Buchinsky.

The Volga is the longest river in Europe, and is considered the national river of Russia.

55. Bell or shell lead-in TACO
Taco Bell was founded by a former US Marine, 25-year-old Glen Bell. His first restaurant was Bell’s Drive-In, located in Southern California. After opening that first establishment, Bell bought up some more restaurants including four named El Taco. He sold off the El Taco restaurants but used the name in part when he opened his first Taco Bell in 1962. Bell sold then sold franchises, with the 100th Taco Bell opening in 1967. The ex-Marine sold off the whole chain to PepsiCo in 1978, and I am guessing he made a pretty penny.

58. Type size PICA
A pica is a unit of measure used in typography. One pica is equivalent to 1/6 of an inch. Each pica unit contains 12 “points”.