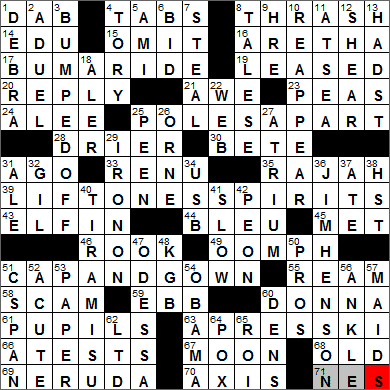 CROSSWORD SETTER: Patti Varol
THEME: Après-Ski … each of today’s themed answers starts with a word that is often seen after (après) SKI:

Today’s Wiki-est, Amazonian Googlies
Across
4. Dinner bills TABS
When we “run a tab” at a bar say, we are “running a tabulation”, a listing of what we owe. Such a use of “tab” is American slang that originated in the 1880s.

14. Dean’s email suffix EDU
Our use of “dean” to describe an administrative officer in an educational institution dates back to the 1570s. The term comes via the Old French “deien” from the Latin “decanus”, which was the name for the head of a group of ten monks in a monastery, and earlier still, the name for the commander of ten soldiers. So ultimately, “dean” comes from the Greek “deka” meaning “ten”.

16. “Respect” singer Franklin ARETHA
I think Aretha Franklin, the Queen of Soul, had a tough life. Franklin had her first son when she was just 13-years-old, and her second at 15. In 2008, “Rolling Stone” magazine ranked Franklin as number one in their list of the greatest singers of all time.

“Respect” is a song by Otis Redding, and one that he recorded himself in 1965. It became a hit when Aretha Franklin made her famous cover version in 1967. Having said that, the Redding and Franklin versions do have different storylines and musical “feels”.

24. Out of the wind ALEE
“Alee” is the direction away from the wind. If a sailor points into the wind, he or she is pointing “aweather”.

30. __ noire: dreaded thing BETE
“Bête noire” translates from French as “the black beast” and is used in English for something or someone that is disliked.

Bausch & Lomb is an American company headquartered in Rochester, New York. It is a major supplier of contact lenses and associated eye-care products. As one might guess, the company was founded (in 1853) by two German immigrants, John Jacob Bausch and Henry Lomb. Bausch was an optician, and Lomb the “money man”. The company was set up originally to manufacture monocles.

44. Strong veiny cheese BLEU
The mold on blue cheese is actually from the genus Penicillium, the same genus of mold that is the source of many antibiotics.

Being a bit of a French speaker (admittedly a pretty poor one), the term “bleu” cheese has always kind of irritated me. I would prefer that we use either “blue cheese” or “fromage bleu” and not mix the languages, but then I can be annoyingly picky! It’s said that blue cheese was probably discovered accidentally, as molds tend to develop in the same conditions that are best for storing cheese. The blue mold in the cheese is introduced by adding Penicillium spores before the cheese is allowed to set. And yes, it’s the same mold that is used to produce penicillin, the antibiotic.

46. Chess corner piece ROOK
The corner piece in the game of chess is a called a rook, a word coming from the Persian word “rokh” meaning a “chariot”. The rook has also been called, perhaps incorrectly, the castle, tower, marquess and rector.

51. Graduation garb CAP AND GOWN (from “ski cap”)
Mortarboards, or square academic caps, are associated with school graduations all over the world, although traditions do differ. For example in Ireland (where I come from), mortarboards are only worn by female graduates.

58. Grifter’s game SCAM
A grifter is a confidence trickster, although the term has been used for non-violent criminals in general.

63. Time relaxing in a chalet, and where the first words of 17-, 25-, 39-, and 51-Across may appear APRES-SKI
Après-ski is a French term, meaning “after skiing”, and refers to the good times to be had after coming off the slopes.

66. Some nuclear trials A-TESTS
There are two classes of nuclear weapons, both of which get the energy for the explosion from nuclear reactions. The first nuclear bombs developed, called atomic bombs (A-bombs), use fission reactions. In an atomic bomb, uranium nuclei are split into smaller nuclei with the release of an awful lot of energy in the process. The second class of nuclear weapons are fusion bombs. Fusion devices are also called thermonuclear weapons or hydrogen bombs (H-bombs). In a fusion reaction, the nuclei of hydrogen isotopes are fused together to form bigger nuclei, with the release of even greater amounts of energy than a fission reaction.

Down
1. Actress Messing of “Will & Grace” DEBRA
Debra Messing’s most famous role is Grace, in the television series “Will & Grace”.

4. Conservative Brit TORY
“Tory” comes from the Irish word “tóraí” meaning “outlaw, robber”. The term “tory” was originally used for an Irish outlaw and later became a term of abuse for Irish rebels. At the end of the reign of King Charles II in Britain, there was a political divide with one side being called “Whigs” and the other “Tories”. Historically, the term “Tory” evolved to basically mean a supporter of the British monarchy, and today is used for a member of the British Conservative Party.

5. Bordeaux boyfriend AMI
A male friend in France is “un ami”, and a female friend is “une amie”.

6. Offer at Sotheby’s BID
Sotheby’s is one of the world’s oldest auction houses, having opened its doors for business in 1744 in London. However, the company is now headquartered in New York City.

8. “Honor Thy Father” writer Gay TALESE
Gay Talese is an American author, famous as a journalist in the sixties at “The New York Times”. His 1981 book “Thy Neighbor’s Wife” is a study of sexuality in America in the early fifties. Apparently, as research for the book, Talese had sexual relations with his own neighbor’s wife for several months at a sexuality resort in Southern California called Sandstone Retreat.

Gay Talese’s 1971 book “Honor Thy Father” is about the Bonanno crime family of New York City in 1960s.

9. 1,000-year Eur. realm HRE
The Holy Roman Empire (HRE) existed from 962 to 1806 AD and was a territory of varying size over the centuries that centered on the Kingdom of Germany. The HRE was a successor to the western half of the Ancient Roman Empire.

18. K.C. Royal, e.g. ALER
The Kansas City Royals Major League Baseball team was founded in 1969. The team takes its name from the American Royal, a livestock show and rodeo held annually in Kansas City since 1899.

22. E.B. White’s “Charlotte’s __” WEB
“Charlotte’s Web” is a children’s novel by author E. B. White. Charlotte is a barn spider, who manages to save the life of a pig named Wilbur. Wilbur is a pet pig, owned by the farmer’s daughter, Fern Arable. The story also includes a gluttonous rat called Templeton who provides some light and comical moments.

Elwyn Brooks (E. B.) White was an American writer. His most famous creations were the children’s stories “Charlotte’s Web” and “Stuart Little”, but he also co-authored the writing guide titled “The Elements of Style” (usually referred to as “Strunk & White”).

25. Ball-__ hammer PEEN
The peen of a hammer is on the head, and is the side of the head that is opposite the striking surface. Often the peen is in the shape of a hemisphere (as in a ball-peen hammer), but usually it is shaped like a claw (mainly for removing nails).

26. Normandy river ORNE
Orne is a department and river in the northwest of France. Perhaps one of the most famous locations in Orne is the village of Camembert, the home of the famous (and delicious!) cheese.

27. Naturally lit courtyard ATRIUM
In modern architecture an atrium (plural “atria” or “atriums”) is a large open space usually in the center of a building and extending upwards to the roof. The original atrium was an open court in the center of an Ancient Roman house. One could access most of the enclosed rooms of the house from the atrium.

32. Baseball’s Hodges GIL
Gil Hodges was a professional baseball player and manager. Perhaps Hodges’ most celebrated achievement was managing the New York Mets team (the “Miracle Mets”) that won the 1969 World Series. Hodges died from a heart attack just a few years later in 1972, when he was only 48 years old.

34. PC-to-printer port USB
Universal Serial Bus (USB) is an industry standard dealing with how computers and electronic devices connect and communicate, and deal with electrical power through those connections.

36. “Sesame Street” puppeteer JIM HENSON
Jim Henson was a puppeteer, and most famously the creator the Muppets characters. Henson produced his first puppets for a local television station in Hyattsville, Maryland while he was still in high school. As well as the famous Muppet characters, Henson created, operated and voiced the character Yoda in most of the “Star Wars” movies. Henson died from a streptococcal infection in 1990, on the same day Sammy Davis, Jr. passed away.

38. FDR successor HST
The initial “S” in the middle of the name Harry S. Truman (HST) doesn’t stand for anything. The future-president was named “Harry” in honor of his mother’s brother Harrison “Harry” Young. The initial “S” was chosen in honor of young Harry’s two grandfathers: Anderson S-hipp Truman and S-olomon Young.

40. Italian dessert sometimes made with espresso TIRAMISU
Tiramisu is an Italian cake. The name “tiramisu” translates from Italian as “pull me up”, and is often translated into our English phrase “pick-me-up”.

42. Drudge PEON
A peon is a lowly worker with no real control over his/her working conditions. The word comes into English from Spanish where it has the same meaning.

47. Black Sea port ODESSA
The city of Odessa (also “Odesa”) in Ukraine was founded relatively recently, in 1794 by Catherine the Great. The city was originally meant to be called Odessos after an ancient Greek city believed to have been located nearby. Catherine liked the way the locals pronounced the name as “Odessa” and so went with the less Greek-sounding name.

48. Old USSR spy gp. KGB
The Komitet gosudarstvennoy bezopasnosti (KGB) was the national security agency of the Soviet Union until 1991. The KGB was dissolved at that time after the agency’s chairman led a failed attempt at a coup d’état designed to depose President Mikhail Gorbachev.

54. Only U.S. president born in Hawaii OBAMA
Despite rumors to the contrary, I am pretty sure that Barack Hussein Obama II was indeed born in Hawaii. President Obama was born on August 4, 1961 at Kapi’olani Maternity & Gynecological Hospital in Honolulu, Hawaii.

62. U.K. business abbr. LTD
In Britain and Ireland the most common type of business (my perception anyway) is one that has private shareholders whose liability is limited to the value of their investment. Such a company is known as a private limited company, and has the letters “Ltd” after the name. If the shares are publicly traded, then the company is a public limited company, and has the letters “plc” after the name.

64. Chicken __ POX
Chickenpox is a viral infection, a classic disease of childhood most commonly caught by 4-10 year olds. There is a complication that can arise later in life as the virus sometimes reactivates to cause shingles.