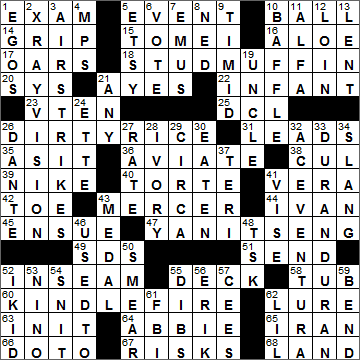 CROSSWORD SETTER: C.C. Burnikel
THEME: End of Land … the last three letters in each of today’s themed answers makes the name of a country when -LAND is appended:

Today’s Wiki-est, Amazonian Googlies
Across
10. Elaborate dance BALL
A “ball” is a formal dance. The term derives from the Latin “ballare” meaning “to dance”, a word that also gives us “ballet”.

15. “The Lincoln Lawyer” actress Marisa TOMEI
Marisa Tomei’s first screen role was in “As the World Turns”, but her break came with a recurring role in “The Cosby Show” spinoff called “A Different World”. Tomei won an Oscar for her delightful performance in “My Cousin Vinny” in 1992.

“The Lincoln Lawyer” is a novel by author Michael Connelly that was made into a 2011 film of the same name starring Matthew McConaughey in the title role.

18. Hot-looking dude STUDMUFFIN (giving “Finland”)
The Nordic country Finland is the most sparsely populated nation in the European Union. The relatively modest population of 5.5 million people live in the eighth largest country in the continent.

23. Powerful engine V-TEN
The engine known as a V10 is configured with two rows of four cylinders mounted on a crankcase. The rows of cylinders are offset from each other around the crankshaft at right angles, or perhaps a little less. This arrangement of ten cylinders in a V-shape gives rise to the name “V10”.

25. 650, to Augustus DCL
Gaius Octavius Thurinus (often called Octavian) was the adopted son of Gaius Julius Caesar. After Julius Caesar was assassinated, Octavian came to power in Rome and teamed up with Mark Antony and Marcus Aemilius Lepidus in what was called the Second Triumvirate. When the triumvirate fell apart, especially after Antony’s defeat at Actium, Octavian became more powerful within the Roman Republic. Several years later he wrested sufficient power from the Roman Senate to end the Republic and begin the Roman Empire. As the first Emperor of Rome, Octavian was given the name Caesar Augustus. The month of August, originally called “Sextilis” in Latin, was renamed in honor of Augustus.

26. Unsavory-sounding Cajun side DIRTY RICE (giving “Iceland”)
“Dirty rice” is a white rice made to look “dirty” by cooking it with chicken liver, green peppers, celery and onion, with cayenne and black pepper. Dirty rice is a traditional Cajun dish.

Iceland is the most sparsely populated country in the whole of Europe, with two-thirds of the nation’s population residing in and around the capital city of Reykjavik. Iceland was settled by the Norse people in AD 874, and was ruled for centuries by Norway and then Denmark. Iceland became independent in 1918, and has been a republic since 1944.

38. __-de-sac CUL
Even though “cul-de-sac” can indeed mean “bottom of the bag” in French, the term cul-de-sac is of English origin (the use of “cul” in French is actually quite rude). The term was introduced in aristocratic circles at a time when it was considered very fashionable to speak French. Dead-end streets in France are usually signposted with just a symbol and no accompanying words, but if words are included they are “voie sans issue”, meaning “way without exit”.

39. Maker of the Air Max athletic shoe NIKE
Nike was the Greek goddess of victory, often referred to as the Winged Goddess of Victory. The athletic shoe company Nike uses the “Nike swoosh” as its logo, which is based on the goddess’s wing.

40. Rich cake TORTE
A torte is a type of cake made primarily with eggs, sugar and ground nuts (but no flour).

43. Lyricist Johnny MERCER
Johnny Mercer is best known as a lyricist, but he was also the main co-founder of Capitol Records. Mercer is also remembered for an affair that he had with a young Judy Garland. He wrote the song “I Remember You” for Garland. after the affair was over.

44. “Terrible” ruler IVAN
The Grand Prince of Moscow, Ivan IV, became known as Ivan the Terrible. The name “terrible” is a translation from Russian, and perhaps creates the wrong impression about the man. The Russian word is “Grozny”, which is more akin to “strict” and “powerful” rather than “cruel” or “abominable”.

49. ’60s militant campus gp. SDS
Students for a Democratic Society (SDS) was an activist group in the sixties. The SDS organized the largest student strike in the history of the United States on 26 April 1968, with about a million students staying away from class that day. The “Students for a Democratic Society” name was revived in 2006 with the foundation of a new US-based student organization with left wing beliefs. Today’s SDS was founded by a pair of high school students from Greenwich Village, New York.

52. Slacks measure INSEAM
The term “slacks” was introduced in the early 1800s with the the meaning “loose trousers”. Those early slacks were part of a military uniform.

60. Nook Tablet rival KINDLE FIRE (giving “Ireland”)
I bought myself a Kindle Fire HD not that long ago. I’ve started reading e-books for the first time in my life, as well as enjoying other computing options available with the tablet device. I love it …

62. Angler’s artificial fly, e.g. LURE
We use the verb “to angle” to mean “to fish” because “angel” was an Old English word for a hook.

64. Yippies co-founder Hoffman ABBIE
Abbie Hoffman was the founder of the “Yippies”, an activist group that had violent clashes with the police during the 1968 Democratic National Convention in Chicago.

Down
1. Self-perceptions EGOS
Sigmund Freud created a structural model of the human psyche, breaking it into three parts: the id, the ego, and the super-ego. The id is that part of the psyche containing the basic instinctual drives. The ego seeks to please the id by causing realistic behavior that benefits the individual. The super-ego almost has a parental role, contradicting the id by introducing critical thinking and morals to behavioral choices.

2. One of Superman’s powers X-RAY VISION
Superman was sent to Earth in a rocket as a child by his parents who were living on the doomed planet of Krypton. On Earth he was discovered by the Kents, farmers who lived near the fictional town of Smallville. The Kents raised the infant as their own, giving him the name Clark.

5. Online marketplace for handmade goods ETSY
Etsy.com is an e-commerce website where you can buy and sell the kind of items that you might find at a craft fair.

7. Flightless birds EMUS
The large flightless birds called emus make sounds by manipulating inflatable necks sacs. The sac is about a foot long, has a thin wall and allows the bird to emit a booming sound. The type of sound emitted is the easiest way to differentiate between male and female emus.

8. Actor Beatty NED
Ned Beatty is probably best remembered for the rather disturbing “squeal like a pig” scene in the movie “Deliverance”. Beatty also earned an Academy Award nomination as Best Supporting Actor for his performance in the 1976 movie “Network”.

13. Pre-Easter season LENT
In Latin, the Christian season that is now called Lent was termed “quadragesima” (meaning “fortieth”), a reference to the forty days that Jesus spent in the desert before beginning his public ministry. When the church began its move in the Middle Ages towards using the vernacular, the term “Lent” was introduced. “Lent” comes from “lenz”, the German word for “spring”.

19. Ben or Sam UNCLE
Uncle Ben’s is a famous brand of rice introduced in 1943. It was the biggest selling brand of rice in the US from the fifties through the nineties. As one might imagine, the name “Uncle Ben” is pretty offensive and Mars, who owns the brand now, have tried to distance themselves from the African-American slave/domestic servant image. In 2007 there was a TV campaign showing “Uncle Ben” as Chairman of the Board of the company. But, he is still called Uncle Ben …

26. “Inferno” poet DANTE
Dante Alighieri’s “Divine Comedy” is an epic poem dating back to the 14th century. The first part of that epic is “Inferno”, which is the Italian word for “Hell”. In the poem, Dante is led on a journey by the poet Virgil, starting at the gates of Hell on which are written the famous words “Abandon all hope, ye who enter here”.

29. About, in dates CIRCA
“Circa” is a Latin word meaning “around, near, about the time of”. We use “circa” directly in English to mean “about the time of”, as well as in derivative words such as “circle” and “circus”.

30. Moth-__: tattered EATEN
The larvae of several types of moth are noted for eating fabrics made from natural fibers such as wool or cotton. Many people store woolens in cedar chests believing that the scent of the wood prevents a moth infestation. In fact, the only known effective repellent is the naphthalene found in mothballs, which might be a health concern for humans. One way to kill moth larvae in fabric is to freeze the garment for several days at a temperature below 8 degrees centigrade.

32. Pet detective of film ACE VENTURA
Ace Ventura was the title character in two movies, “Ace Ventura: Pet Detective” (1994) and “Ace Ventura: When Nature Calls” (1995). In both films the title role was played by Jim Carrey.

33. “Hungry Like the Wolf” rockers DURAN DURAN
Duran Duran is a New Wave band from Birmingham in England. Duran Duran’s success was partially driven by some well-received MTV music videos in the 1980s. The band also worked hard on their image and paid a lot of money for very fashionable clothes in which they performed. As a result, one of Duran Duran’s nicknames is “the prettiest boys in rock”.

37. Actress Hatcher TERI
Teri Hatcher’s most famous role these days is the Susan Mayer character in “Desperate Housewives”. I’ve never seen more than a few minutes of “Housewives” but I do know Teri Hatcher as a Bond girl, as she appeared in “Tomorrow Never Dies”.

53. Boy, in Bogotá NINO
Bogotá is the capital city of Colombia. Noted for having many libraries and universities, Bogotá is sometimes called “The Athens of South America”.

54. Bad mood SNIT
The exact etymology of “snit”, meaning “fit of temper”, isn’t really known. The term was first used in print in the play “Kiss the Boys Goodbye” by Clare Booth Luce, which dates back to the 1930s and is set in the American South.

55. “That’s mine!” DIBS!
The phrase “to have dibs on” expresses a claim on something. Apparently, the term “dibs” is a contraction of “dibstone”, which was a knucklebone or jack used in a children’s game.

61. G-man’s org. FBI
What we know today as the FBI was set up in 1908 as the BOI, the Bureau of Investigation. The name was changed to the Federal Bureau of Investigation in 1935. The Bureau was set up at the behest of President Theodore Roosevelt. President Roosevelt was largely moved to do so after the 1901 assassination of President McKinley, as there was a perception that anarchists were threatening law and order. The FBI’s motto uses the organization’s initialism, and is “Fidelity, Bravery, Integrity”.

62. “__ Abner” L’IL
The cartoon strip “Li’l Abner” was created and drawn by Al Capp for over 43 years starting in 1934. Al Capp stopped producing the strip in 1977, largely due to illness (he died from emphysema two years later). As the strip finished up, he went so far as to apologize to his long-standing fans, saying that he should have stopped 3-4 years earlier as he felt that the quality of his work had gone down in those latter years.