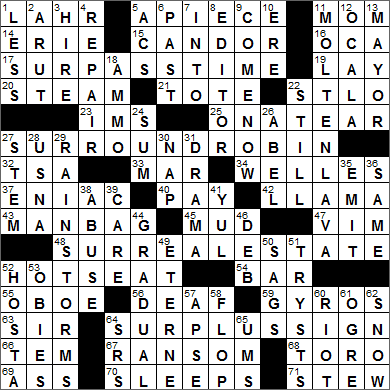 CROSSWORD SETTER: Gail Grabowski
THEME: Sur-Phrases … each of today’s answers is a common phrase, but with a SUR- prefix added to the first word:

17A. Scoop a major news magazine? SURPASS TIME (from “pass time”)
27A. Sheriff of Nottingham’s plan? SURROUND ROBIN (from “round robin”)
48A. The Biltmore House? SURREAL ESTATE (from “real estate”)
64A. Banner advertising overstocked shelves? SURPLUS SIGN (from “plus sign”)

Today’s Wiki-est, Amazonian Googlies
Across
1. Actor who spoke the line, “I’d show him who was king of the forest!” LAHR
Bert Lahr’s most famous role was the cowardly lion in “The Wizard of Oz”. Lahr had a long career in burlesque, vaudeville and on Broadway. Lahr also starred in the first US production of Samuel Beckett’s play “Waiting for Godot”, alongside Tom Ewell.

The movie “The Wizard of Oz” is full of irony. The Scarecrow wants to be intelligent and discovers he is already very smart. The Tin Man wants to be able to love and finds out that he already has a heart. The Lion thinks he is a coward but turns out to be fearless. And the big reveal is that the Wizard of Oz, who is positioned as all-powerful, is actually just a bumbling and eccentric old man.

14. Northern terminus of I-79 ERIE
Erie is a city in the very north of Pennsylvania, right on the southern shore of Lake Erie. The city takes its name from the Erie Native American tribe that resided in the area.

16. Andean tuber OCA
The plant called an oca is also known as the New Zealand Yam. The tubers of the oca are used as a root vegetable.

17. Scoop a major news magazine? SURPASS TIME (from “pass time”)
“Time” magazine has a readership of about 25 million, making it the largest circulation weekly news magazine in the world.

22. WWII battleground ST LO
Saint-Lô is a town in Normandy that was occupied by Germany in 1940. Saint-Lo stood at a strategic crossroads and so there was intense fighting there during the Normandy invasion of 1944. After a prolonged bombardment, very little of the town was left standing.

23. Cyberchats, briefly IMS
Even though instant messaging (sending IMs) has been around since the 1960s, it was AOL who popularized the term “instant message” in the eighties and nineties.

27. Sheriff of Nottingham’s plan? SURROUND ROBIN (from “round robin”)
Robin Hood is a figure from English folklore, celebrated in story and song. Some stories suggest that Robin Hood the outlaw was actually a real nobleman, the Earl of Huntington. Robin Hood’s famous companion was Maid Marian. Interestingly, the legend of Maid Marian (full name Lady Marian of Leaford) had been around for centuries before she became associated with Robin Hood starting in the 1700s.

32. Bag-screening org. TSA
The Transportation Security Administration (TSA) was created in 2001, in the aftermath of the 9/11 attacks.

34. “The Magnificent Ambersons” director WELLES
“The Magnificent Ambersons” is a 1942 film that is based on a 1918 novel by Booth Tarkington. The film is a little controversial in that RKO, the studio that made the film, cut a substantial amount of footage and reshot a happier ending, against the wishes of producer and director Orson Welles. The film tells the story of a wealthy Indianapolis family whose fortune changes with the arrival of the automobile age.

37. Pioneering computer ENIAC
The acronym ENIAC stands for Electronic Numerical Integrator and Calculator (although many folks insist that the C was for “Computer”). ENIAC was the first general-purpose electronic computer. It was designed to calculate artillery firing tables, but it ended up being used early on to make calculations necessary for the development of the hydrogen bomb. Given its uses, it’s not surprising to hear that development of ENIAC was funded by the US Army during WWII.

40. Pony up PAY
“To pony up” means “to pay”. Apparently the term originated as slang use of the Latin term “legem pone” that was once used for “money”. “Legem Pone” was the title of the Psalm that was read out on March 25 each year, and March 25 was the first payday of the year in days gone by.

42. Wool source LLAMA
The wool from a llama is much softer than that from a sheep, and it is also free from lanolin.

47. Gusto VIM
“Gusto” is an Italian word meaning “taste”. We use it in the sense of “with gusto”, with great enjoyment.

48. Hearst Castle? SURREAL ESTATE (from “real estate”)
Hearst Castle is a magnificent mansion and estate on the California coast near the town of San Simeon. Hearst Castle was built over many years, between 1919 and 1947, for William Randolph Hearst the newspaper magnate. If you’re ever in the area, I thoroughly recommend spending a few hours touring the house and grounds. It has to be seen to be believed …

59. Greek restaurant offerings GYROS
A gyro is a traditional Greek dish, a sandwich made with pita bread containing meat, tomato, onion and tzatziki (a yogurt and cucumber sauce). The meat for gyros is usually roasted on a tall vertical spit and is sliced from the spit as required. The name “gyro” comes from the modern Greek word “gyros” meaning “circle”, a reference to the meat turning as it is grilled in a rotating circular motion.

63. Title for Sean Connery SIR
Sean Connery is most famous for playing the original James Bond in the successful series of movies. Back in his native Scotland, Connery is very active in politics and is a member of the Scottish Nationalist Party. He actively campaigns for Scottish independence from Britain and has stated that he believes Scotland will achieve that goal within his own lifetime. That seems less likely now, given the result of the recent Scottish referendum on independence.

66. President pro __ TEM
“Pro tempore” can be abbreviated to “pro tem” or “p.t.” “Pro tempore” is a Latin phrase that best translates as “for the time being”. It is used to describe a person who is acting for another, usually a superior.

69. Intractable beast ASS
Something described as “intractable” is stubborn, not easily managed.

12. City west of Daytona Beach OCALA
The city of Ocala, Florida was founded near a historic village with the same name. In the local Timucua language “Ocala” means “Big Hammock”. Back in the 1890s, Ocala was famous for its oranges, with over one third of that fruit shipped from Florida coming from the city. Also, thoroughbred horse farming in Florida started in Ocala, back in 1943. Some folks today call Ocala the “Horse Capital of the World”, but I bet that’s disputed by others …

The coastal city of Daytona Beach in Florida is known for hard-packed sand on the beach. This makes a good surface for driving motorized vehicles, and resulted in Daytona Beach becoming a center for motorsports.

24. Dim __ SUM
Dim sum is a Chinese cuisine made up of small portions of various dishes. The tradition of serving dim sum is associated with the serving of tea, when small delicacies were offered to travelers and guests along with tea as a refreshment. The name “dim sum” translates as “touch the heart” implying that dim sum is not a main meal, just a snack “that touches the heart”.

26. Son of Adam ABEL
According to the Bible, Adam and Eve had several children, although only the first three are mentioned by name: Cain, Abel and Seth.

28. Annapolis inst. USNA
The United States Naval Academy (USNA) is located in Annapolis, Maryland. The USNA was founded in 1845 and educates officers for both the US Navy and the US Marine Corps. The motto of the USNA is “Ex Scientia Tridens”, which translates as “From Knowledge, Sea Power”.

29. Reasons to pull out the tarp RAINSTORMS
Originally, tarpaulins were made from canvas covered in tar that rendered the material waterproof. The word “tarpaulin” comes from “tar” and “palling”, with “pall” meaning “heavy cloth covering”.

31. Emmy category DRAMA
The Emmy Awards are the television equivalent of the Oscars in the world of film, the Grammy Awards in music and the Tony Awards for the stage. Emmy Awards are presented throughout the year, depending on the sector of television being honored. The most famous of these ceremonies are the Primetime Emmy Awards and the Daytime Emmy Awards. The distinctive name of “Emmy” is a softened version of the word “immy”, the nickname given to the video camera tubes found in old television cameras.

41. Actor Brynner YUL
Yul Brynner was a Russian-born actor. Brynner was well known for his great performances, but also for his shaved head and his deep rich voice. He first adopted the “hairstyle” while playing the King of Siam in the stage version of “The King and I”, and he stuck with it.

46. Cotillion honoree DEB
“Cotillion” is an American term that we’ve been using since about 1900 for a formal ball. In France a cotillion was a type of dance, with the term deriving from an Old French word for a petticoat. I guess the cotillion dance was one in which the lady would flash her petticoats as she did a twirl!

51. Hush-hush hookups TRYSTS
In its most general sense, a tryst is a meeting at an agreed time and place. More usually we consider a tryst to be a prearranged meeting between lovers. The term comes from the Old French “triste”, a waiting place designated when hunting.

52. Shade-loving plant HOSTA
The Hosta genus of plant was once classified as a lily, but is now in a family of its own and is described as “lily-like”. The plant was given the name “Hosta” in honor of the Austrian botanist Nicolaus Thomas Host.

57. Sanctuary section APSE
The apse of a church or cathedral is a semicircular recess in an outer wall, usually with a half-dome as a roof and often where there resides an altar. Originally apses were used as burial places for the clergy and also for storage of important relics.

AARP is now the official name for the interest group that used to be called the American Association of Retired Persons. The name change reflects the current focus of the group on all Americans aged 50 or over, as opposed to just people who have retired.