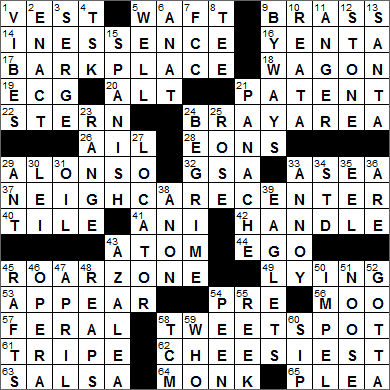 CROSSWORD SETTER: Mark Feldman
THEME: Where to Hear Animals … each of today’s themed answers comprises two parts, a sound made by an animal followed by a synonym for “locale”. And, each answer sounds like a common phrase, but with the start altered to suit the clue:

17A. Where dogs chat? BARK PLACE (from “Park Place”)
24A. Where donkeys make noise? BRAY AREA (from “play area”)
37A. Where horses are treated for laryngitis? NEIGH-CARE CENTER (from “daycare center”)
45A. Where lions practice intimidation? ROAR ZONE (from “war zone”)
58A. Where birds sing? TWEET SPOT (from “sweet spot”)

Today’s Wiki-est, Amazonian Googlies
Across
1. One may be under a jacket VEST
Here’s another word that often catches me out. What we call a vest in the US is a waistcoat back in Ireland. And the Irish use the word “vest” for an undershirt.

16. Storyteller of a sort YENTA
Yenta (also “Yente”) is actually a female Yiddish name. In Yiddish theater “yenta” came to mean a busybody.

19. Hosp. test ECG
An EKG measures electrical activity in the heart. Back in my homeland of Ireland, an EKG is known as an ECG (for electrocardiogram). We use the German name in the US, Elektrokardiogramm, giving us EKG. Apparently the abbreviation EKG is preferred as ECG might be confused (if poorly handwritten, I guess) with EEG, the abbreviation for an electroencephalogram.

29. King of Naples in “The Tempest” ALONSO
In William Shakespeare’s play “The Tempest”, Alonso is the King of Naples. Alonso helps Antonio to depose his brother Prospero as Duke of Milan and set him adrift in a boat with Prospero’s young daughter Miranda.

32. Fed. property overseer GSA
The US Government’s General Services Administration (GSA), as the name suggests, provides general services to other federal agencies. So for example, the GSA manages office space for the other agencies, and transportation.

40. Scrabble piece TILE
The highest score recorded in an official game of Scrabble is 830, by Michael Cresta of Massachusetts in an 830-490 win in 2006.

41. Singer DiFranco ANI
Ani DiFranco is a folk-rock singer and songwriter. DiFranco has also been labeled a “feminist icon”, and in 2006 won the “Woman of Courage Award” from National Organization of Women.

42. Alias HANDLE
Someone’s “handle” is his or her name, perhaps an alias.

44. Freudian topic EGO
Sigmund Freud created a structural model of the human psyche, breaking it into three parts: the id, the ego, and the super-ego. The id is that part of the psyche containing the basic instinctual drives. The ego seeks to please the id by causing realistic behavior that benefits the individual. The super-ego almost has a parental role, contradicting the id by introducing critical thinking and morals to behavioral choices.

56. Guernsey sound MOO
Guernsey cattle were originally bred on Guernsey in the British-owned Channel Islands. Guernsey cows are famous for the rich flavor of their milk.

61. Drivel TRIPE
“Tripe” is an informal term meaning “rubbish, of little value”. Tripe is actually the rubbery lining of say a cow, that in the UK is traditionally eaten with onions.

62. Most tacky CHEESIEST
“Cheesy” can mean “of poor quality”. Its usage dates back to the late 1800s and the word is derived from the Urdu “chiz” meaning “thing”. “Chiz” was used to describe a big thing, something important, and our word “cheesy” is an ironic derivative from that sense.

63. Pace product SALSA
Pace Foods produces a line of salsas in Paris, Texas. The company was founded by David Pace in 1947, with his first product a salsa that he called “Picante” sauce. Back then, salsa was known as “Mexican sauce”, and “salsa” is simply the Spanish for “sauce”.

64. Coltrane collaborator MONK
Thelonious Monk was a jazz pianist and composer, the second-most recorded jazz composer after the great Duke Ellington. That’s a pretty impressive statistic given that Ellington wrote more than 1,000 songs, whereas Monk only wrote about 70. Monk was a pioneer in the development of the jazz style called “bebop”, which gained popularity in the 1940s.

Down
3. Suit material SERGE
Serge is a type of twill fabric with diagonal ridges on both sides. The name “serge” comes from the Greek word for “silken”.

6. Vet sch. course ANAT
“Vet” is an abbreviation for “veterinarian”, a professional who treat animals for disease and injury. The word “veterinary” comes from the Latin “veterinae” meaning “working animals, beasts of burden”.

7. TV monitor FCC
TV broadcasting is monitored by the Federal Communications Commission. The FCC has been around since 1934, when it replaced the Federal Radio Commission.

8. Rectangular links area, usually TEE
The oldest type of golf course is a links course. The name “links” comes from the Old English word “hlinc” meaning “rising ground”. “Hlinc” was used to describe areas with coastal sand dunes or open parkland. As a result, we use the term “links course” to mean a golf course that is located at or on the coast, often amid sand dunes. The British Open is always played on a links course.

10. Lasso REATA
“Reata” is the Spanish word for “lasso”. We tend to use the spelling “riata” in English, but sometimes can use the original Spanish word.

12. Curling slider STONE
I think curling is a cool game (pun intended!). It’s somewhat like bowls, but played on a sheet of ice. The sport was supposedly invented in medieval Scotland, and is called curling because of the action of the granite stone is it moves across the ice. A player can make the stone take a curved path (“curl”) by causing it to slowly rotate as it slides.

13. Legendary guy traditionally wearing black boots SANTA
The Santa Claus with whom we are familiar today largely comes from the description in the 1823 poem “A Visit from St. Nicholas”, and from the caricature created by the political cartoonist Thomas Nast.

15. What mayo might be SPANISH
In Spanish, the period between May (mayo) and May (mayo) is a year (año).

21. Grand style PANACHE
Someone exhibiting panache is showing dash and verve, and perhaps has a swagger. “Panache” is a French word used for a plume of feathers, especially in a hat.

23. Gamut RANGE
In medieval times, the musical scale was denoted by the notes “ut, re, mi, fa, sol, la”. The term “gamma ut”, shortened to “gamut”, was used to describe the whole scale. By the 1620s, “gamut” was being used to mean the entire range of anything, the whole gamut.

25. Wine choice ROSE
Rosé wines get their color from the skins of the grapes, although the intensity of the color is not sufficient to make them red wines. Of the varying type of rosé wines available, we are most familiar with sweet White Zinfandels. Personally I am fond of the really dry Provençal rosé wines.

30. Island garland LEI
“Lei” is the Hawaiian word for “garland, wreath”, although in more general terms a “lei” is any series of objects strung together as an adornment for the body.

35. It might be electric EEL
Electrophorus electricus is the biological name for the electric eel. Despite its name, the electric “eel” isn’t an eel at all, but rather what is called a knifefish, a fish with an elongated body that is related to the catfish. The electric eel has three pairs of organs along its abdomen, each capable of generating an electric discharge. The shock can go as high as 500 volts with 1 ampere of current (that’s 500 watts), and that could perhaps kill a human.

38. Any day now ANON
“Anon” originally meant “at once” and evolved into today’s meaning of “soon” apparently just because the word was misused over time.

39. Young raptors EAGLETS
“Raptor” is a generic term for a bird of prey, one that has talons to grip its victims.

43. Spring bloomer AZALEA
Azaleas are very toxic to horses, sheep and goats, but strangely enough cause no problem for cats or dogs. And if you go to Korea you might come across “Tug Yonju”, which is azalea wine made from the plant’s blossoms.

45. Loads RAFTS
A “raft” is a large amount, coming from the Middle English “raf” meaning the same thing.

46. Renée Fleming’s field OPERA
Renée Fleming is a marvelous soprano from Indiana, Pennsylvania. Famous for her appearances in opera houses and concert halls all over the world, Fleming is also noted for her willingness to bring her craft to the masses. She was a guest on “Sesame Street”, singing “counting lyrics” to an aria from “Rigoletto”, and she has appeared a few times on Garrison Keillor’s “A Prairie Home Companion”.

54. Rounded tool part PEEN
The peen of a hammer is on the head, and is the side of the head that is opposite the striking surface. Often the peen is in the shape of a hemisphere (as in a ball-peen hammer), but usually it is shaped like a claw (mainly for removing nails).

59. “The __ Sell Out”: 1967 rock album WHO
The English rock band called the Who was formed in 1964, bringing together famed musicians Roger Daltrey, Pete Townshend, John Entwistle and Keith Moon. According to “Rolling Stone” magazine, the Who were the third arm of the holy trinity of British rock, alongside the Beatles and the Rolling Stones.