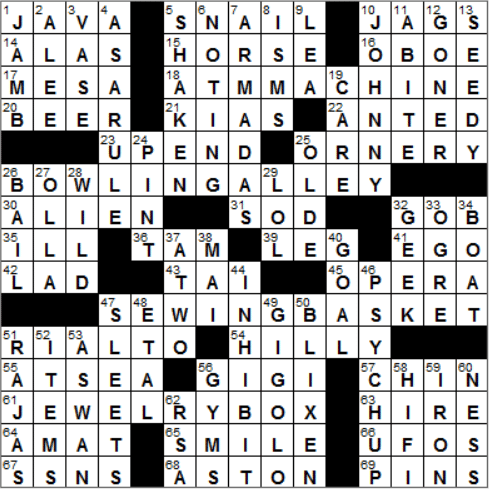 CROSSWORD SETTER: C.W. Stewart
THEME: Things with Pins … each of today’s themed answers is something associated with PINS:

18A. Where to get cash ATM MACHINE
26A. Where to see splits and strikes BOWLING ALLEY
47A. Where to keep needles and thread SEWING BASKET
61A. Where to find valuables JEWELRY BOX

Today’s Wiki-est, Amazonian Googlies
Across
1. Cup of joe JAVA
Back in 1850, the name “java” was given to a type of coffee grown on the island of Java, and the usage of the term spread from there.

10. British sports cars, for short JAGS
Jaguar started out as a manufacturer of sidecars for motorcycles back in 1922, when the company was known as the Swallow Sidecar Company (SS for short). The company changed its name to Jaguar after WWII, because of the unfortunate connotations of the letters “SS” in that era (i.e. the Nazi paramilitary organization).

16. Clarinet cousin OBOE
The oboe is perhaps my favorite of the reed instruments. The name “oboe” comes from the French “hautbois” which means “high wood”. When you hear an orchestra tuning before a performance you’ll note (pun intended!) that the oboe starts off the process by playing an “A”. The rest of the musicians in turn tune to that oboe’s “A”.

17. Flat-topped landform MESA
“Mesa” is the Spanish for “table” and is of course is how we get the term “mesa” that describes a geographic feature.

21. Korean cars KIAS
Kia Motors is the second largest manufacturer of cars in South Korea, behind Hyundai (and Hyundai is a part owner in Kia now). In recent years, Kia has focused on sales into Europe, and has been remarkably successful.

26. Where to see splits and strikes BOWLING ALLEY
In ten pin bowling, a split takes place when the number-one pin (headpin) is a knocked down with the first ball and two or more non-adjacent pins are left standing. The most difficult split to deal with is the infamous 7-10 split, where just the rear pins at the extreme right and left remain standing.

36. Highlander’s hat TAM
A tam o’shanter is a man’s cap traditionally worn by Scotsmen. “Tams” were originally all blue (and called “blue bonnets”), but as more dyes became readily available they became more colorful. The name of the cap comes from the title character of Robert Burns’ poem “Tam O’Shanter”.

41. Id controller EGO
Sigmund Freud created a structural model of the human psyche, breaking it into three parts: the id, the ego, and the super-ego. The id is that part of the psyche containing the basic instinctual drives. The ego seeks to please the id by causing realistic behavior that benefits the individual. The super-ego almost has a parental role, contradicting the id by introducing critical thinking and morals to behavioral choices.

45. La Scala production OPERA
The La Scala Opera House opened in 1778. It was built on the site of the church of Santa Maria della Scala, which gave the theater its name: “Teatro alla Scala” in Italian.

54. Like San Francisco’s terrain HILLY
Many cities around the world claim to have been built on seven hills, most notably Rome in Italy. There are also the “Seven Hills of San Francisco”, namely:

56. Leslie Caron title role GIGI
In the lovely musical film “Gigi”, released in 1958, the title song is sung by Louis Jourdan who plays Gaston. My favorite number though, has to be “Thank Heaven for Little Girls” sung by Maurice Chevalier. Many say that “Gigi” is the last in the long line of great MGM musicals. It won a record 9 Academy Awards, a record that only lasted one year. Twelve months later “Ben Hur” won 11 Oscars. In the 1958 film, Gigi was played by the lovely Leslie Caron. A few years earlier, “Gigi” was a successful Broadway stage play by Anita Loos, adapted from a novel by Colette. Chosen for the title role on stage was the then-unknown Audrey Hepburn.

67. IRS IDs SSNS
The main purpose of a Social Security Number (SSN) is to track individuals for the purposes of taxation, although given its ubiquitous use, it is looking more and more like an “identity number” to me. The social security number system was introduced in 1936. Prior to 1986, an SSN was required only for persons with substantial income so many children under 14 had no number assigned. For some years the IRS had a concern that a lot of people were claiming children on their tax returns who did not actually exist. So, from 1986 onward, it is a requirement to get an SSN for any dependents over the age of 5. Sure enough, in 1987 seven million dependents “disappeared”.

68. __ Martin: British sports car ASTON
Aston Martin is a British car manufacturer, founded in 1913 by Lionel Martin. The Aston part of the company name comes from Aston Hill, a famous site for hill-climbing cars that is nearby the original factory. Aston Martin cars are much loved by the British entertainment industry. Of course James Bond was given one in “Goldfinger”, and Michael Caine drove one in the 1969 version of “The Italian Job”. Roger Moore’s character drove a yellow Aston Martin in the seventies television show “The Persuaders!”.

Down
1. Doorframe part JAMB
A door or window jamb is the vertical portion of the frame. The term “jamb” comes from the French word “jambe” meaning “leg”.

2. On the sheltered side ALEE
“Alee” is the direction away from the wind. If a sailor points into the wind, he or she is pointing “aweather”.

3. Bouquet holder VASE
“Bouquet” comes from the French word for a “bunch” in the sense of bunch of flowers. In French the term was derived from an older word describing a little wood, or a small grove of trees.

5. How Bond likes martinis SHAKEN
Why have a vodka martini shaken and not stirred (as does James Bond, 007)? Well, for one thing the shaken drink tends to be colder. And with more melted ice in the drink, it isn’t as strong. These are my personal observations … no need to write in …

7. Warship fleets ARMADAS
The most famous Armada was the Spanish fleet that sailed against England in order to overthrow Queen Elizabeth I in 1588. It failed in its mission, partly due to bad weather encountered en route. Ironically, the English mounted a similar naval attack against Spain the following year, and it failed as well.

Ed McMahon was Johnny Carson’s sidekick on “The Tonight Show”. McMahon was trained as a fighter in WWII, but did not see action. However he saw a lot of action in the following conflict as he did fly 85 combat missions in Korea.

13. Shabby SEEDY
We use the word “seedy” to mean “shabby”. The usage probably arose from the appearance of a flowering plant that has gone to seed.

25. Shoppe adjective OLDE
The word “olde” wasn’t actually used much earlier than the 1920s. “Olde” was introduced to give a quaint antique feel to brand names, shop names etc.

27. Earthenware pot OLLA
An olla is a traditional clay pot used for the making of stews. “Olla” was the Latin word used in Ancient Rome to describe a similar type of pot.

Even though instant messaging (sending IMs) has been around since the 1960s, it was AOL who popularized the term “instant message” in the eighties and nineties.

32. __ Squad: Best Buy tech support GEEK
Best Buy is a retailer specializing in the supply of consumer electronics. Best Buy services include the famous “Geek Squad”, a band of technical experts that will help solve your computer and other consumer electronic problems.

37. Part of Lawrence Welk’s cadence A TWO
Lawrence Welk used to count into his performances with “A one and a two …”. He even had a licence plate “A1ANA2”.

38. With 43-Across, umbrella drink MAI
(43A. See 38-Down TAI)
The Mai Tai cocktail is strongly associated with the Polynesian islands, but the drink was supposedly invented in 1944 in Trader Vic’s restaurant in Oakland, California. One recipe is 6 parts white rum, 3 parts orange curaçao, 3 parts Orgeat syrup, 1 part rock candy syrup, 2 parts fresh lime juice, all mixed with ice and then a float added of 6 parts dark rum.

47. Comes down as ice pellets SLEETS
Apparently “sleet” is a term used to describe two different weather conditions. One is a shower of ice pellets, smaller than hail, and the second is a mixture of rain and snow, with the snow melting as it falls. It’s the second definition that I have always used …

50. Karen who wrote as Isak Dinesen BLIXEN
Isak Dinesen was the pen name of the Danish author Baroness Karen Blixen. Blixen’s most famous title by far is “Out of Africa”, her account of the time she spent living in Kenya.

51. Indian princes RAJAS
“Raja” (also “rajah”) is word derived from Sanskrit that is used particularly in India for a monarch or princely ruler. The female form is “rani” (also “ranee”) and is used for a raja’s wife.

53. Dam on the Nile ASWAN
From ancient times right up to 1970, the annual flooding of the Nile was a significant event in Egypt. The flooding allowed the deposition of fertile silt far beyond the banks of the river, helping the region’s agriculture. However, the flooding was unpredictable. So the Aswan Dam was built in the sixties and from 1970 the flooding was brought under control.

58. Old record player HI-FI
Hi-fi systems were introduced in the late forties, and is audio equipment designed to give a much higher quality reproduction of sound than cheaper systems available up to that point. “Hi-fi” stands for “high fidelity”.

Cape Town is the legislative capital of the Republic of South Africa (RSA), and is one of three capital cities in the country. Bloemfontein is the judicial capital, and Pretoria is the executive capital.