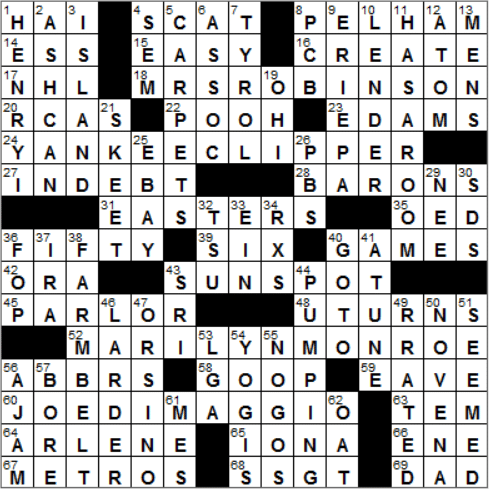 24A. Nickname for 60-Across, with “The” YANKEE CLIPPER

Today’s Wiki-est, Amazonian Googlies
Across
8. “The Taking of __ 1 2 3” PELHAM
“The Taking of Pelham One Two Three” is a novel by Morton Freedgood that has been made into a movie three times, most recently in 2009 as “The Taking of Pelham 123”, starring Denzel Washington and John Travolta. The story is about the hijacking of a New York City subway train that leaves Pelham Bay Park Station at 1:23 pm, giving it the radio call sign of “Pelham 1 2 3”.

17. Org. with Red Wings and Blue Jackets NHL
The Detroit Red Wings play in the National Hockey League. The Red Wings have won the Stanley Cup more times than any other US-based NHL team.

The Blue Jackets are the professional ice hockey team based in Columbus, Ohio. The name “Blue Jacket” is a reference to the uniforms worn by Ohio and Columbus soldiers during the Civil War.

18. 1967 song that asks, “Where have you gone, 60-Across?” MRS ROBINSON
When Mike Nichols was making the 1967 film “The Graduate” he apparently became obsessed with the music of Simon and Garfunkel, who were just coming into the limelight. Nichols made a deal with Paul Simon to write three songs that he could use on the soundtrack of his new movie. Simon and Garfunkel were touring constantly around that time, so Nichols had to badger Simon to hold up his end of the bargain. When Nichols was ready to lay down the film’s soundtrack there was only one commissioned song available, so Nichols had to basically beg Paul Simon for anything. Simon mentioned that he was finishing up one new song, but it wasn’t written for the film. It was more a celebration of former times, with lyrics about baseball great Joe DiMaggio and former First Lady, Mrs. Roosevelt. Nichols informed Simon that the song was no longer about Mrs. Roosevelt, and it was about Mrs. Robinson …

23. Dutch cheeses EDAMS
Edam cheese takes its name from the Dutch town of Edam in North Holland. The cheese is famous for its coating of red paraffin wax, a layer of protection that helps Edam travel well and prevents spoiling. You might occasionally come across an Edam cheese that is coated in black wax. The black color indicates that the underlying cheese has been aged for a minimum of 17 weeks.

24. Nickname for 60-Across, with “The” YANKEE CLIPPER
Baseball great Joe DiMaggio was christened “the Yankee Clipper” in 1939 by Arch McDonald, the stadium announcer for the New York Yankees. McDonald was making the point that DiMaggio’s range and speed in the outfield was reminiscent of the range and speed of Pan American’s Clipper aircraft.

35. Heavy Brit. reference set OED
The “Oxford English Dictionary” (OED) contains over 300,000 “main” entries and 59 million words in total. It is said it would take a single person 120 years to type it out in full. The longest entry for one word in the second edition of the OED is the verb “set”. When the third edition was published in 2007, the longest entry for a single word became the verb “put”. Perhaps not surprisingly, the most-quoted author in the OED is William Shakespeare, with his most quoted work being “Hamlet”. The most-quoted female author is George Eliot (aka Mary Ann Evans).

42. Man-mouse connector OR A
Am I a man or a mouse? Good question …

43. Solar phenomenon SUNSPOT
Sunspots are dark patches observed on the surface of the sun. They are temporary, and are associated with intense magnetic activity. The darkness is indicative of a localized reduction in temperature. Sunspots tend to occur in pairs, with each spot having opposite magnetic poles. Also, solar flares tend to originate from sunspots.

52. 60-Across eloped with her in 1954 MARILYN MONROE
Marilyn Monroe and Joe DiMaggio were married in San Francisco in 1954. However, Monroe filed for a divorce only 274 days later. The brief marriage was Monroe’s second. Her third husband was playwright Arthur Miller, and that marriage lasted five years. There was a lot of speculation after the divorce from Miller that DiMaggio and Monroe were reconciling. Sadly, Monroe committed suicide before the rumors could be confirmed. DiMaggio took charge of his ex-wife’s funeral, and kept the Hollywood elite away. He sent a half-dozen roses to Monroe’s crypt for the next 20 years. When DiMaggio passed away in 1999, his last words were “I’ll finally get to see Marilyn”.

60. Sports great born 11/25/1914 JOE DIMAGGIO
Joe DiMaggio was born not too far from here, in Martinez, California, the son of Italian immigrants. The family moved to San Francisco when Joltin’ Joe was just a baby. Joe’s Dad was a fisherman, and it was his hope that all his sons would follow him into his trade. But Joe always felt sick at the smell of fish, so fishing’s loss was baseball’s gain.

63. Pro __: for now TEM
“Pro tempore” can be abbreviated to “pro tem” or “p.t.” “Pro tempore” is a Latin phrase that best translates as “for the time being”. It is used to describe a person who is acting for another, usually a superior.

64. Actress Dahl ARLENE
Arlene Dahl is an American movie actress, quite famous during the 1950s. Among her screen credits was playing the female lead in 1959’s “Journey to the Center of the Earth”, alongside James Mason and Pat Boone.

67. Undergrounds METROS
The Paris Métro is the busiest underground transportation system in western Europe, carrying about 4.5 million passengers a day, about the same as the New York City Subway. The system took its name from the company that originally operated it: “La Compagnie du chemin de fer métropolitain de Paris”, which was shorted to “Métro”. The term “Metro” was then adopted for similar systems in cities all over the world.

An NCO is a non-commissioned officer in the armed forces. Usually such an officer is one who has earned his or her rank by promotion through the enlisted ranks. A good example would be a sergeant.

Down
1. 12th-century English king HENRY I
Henry I of England was a son of William the Conqueror. According to legend, Henry died from eating “a surfeit of lampreys”, or more likely food poisoning. Lampreys look like a cross between a fish and an eel.

3. Cuba, for one ISLAND
Cuba is the largest island in the Caribbean. The exact etymology of the name “Cuba” seems a little unclear. Most believe “Cuba” to be derived from the Taíno terms for “where fertile land is abundant” (cubao) or “great place” (coabana).

4. Sch. term SEM
“Semester” is a German word from the Latin “semestris”, an adjective meaning “of six months”. We use the term in a system that divides an academic year into two roughly equal parts. A trimester system has three parts, and a quarter system has four.

6. Part of NCAA: Abbr. ASSOC
The National Collegiate Athletic Association (NCAA) dates back to the Presidency of Theodore Roosevelt. When his son broke his nose playing football at Harvard, President Roosevelt turned his attention to the number of serious injuries and even deaths occurring in college sports. He instigated meetings between the major educational institutions leading to the formation of the Intercollegiate Athletic Association of the United States (IAAUS) in 1906, which was given the remit of regulating college sports. The IAAUS became the NCAA in 1910.

7. Innsbruck’s state TYROL
The Austrian state of Tyrol has to be one of the most beautiful places in the world, especially if you love the mountains. It is in the very west of the country, just south of Bavaria in Germany. The capital city is the famous Innsbruck.

9. Port SW of Buffalo, N.Y. ERIE, PA
Erie is a city in the very north of Pennsylvania, right on the southern shore of Lake Erie. The city takes its name from the Erie Native American tribe that resided in the area.

10. Mortgage provider LENDER
Our word “mortgage” comes from the Old French “mort gaige” which translated as “dead pledge”. The idea was that a pledge to repay a loan dies when the debt is cleared.

29. Originally named NEE
“Née” is the French word for “born” when referring to a female. The male equivalent is “né”.

30. Radical ’60s gp. SDS
Students for a Democratic Society (SDS) was an activist group in the sixties. The SDS organized the largest student strike in the history of the United States on 26 April 1968, with about a million students staying away from class that day. The “Students for a Democratic Society” name was revived in 2006 with the foundation of a new US-based student organization with left wing beliefs. Today’s SDS was founded by a pair of high school students from Greenwich Village, New York.

32. Volunteer State sch. TSU
The Tigers and Lady Tigers are the athletic teams of Tennessee State University (TSU) in Nashville.

34. MD’s orders RXS
There seems to some uncertainty about the origin of the symbol “Rx” that’s used for a medical prescription. One explanation is that it comes from the astrological sign for Jupiter, a symbol put on prescriptions in days of old to invoke Jupiter’s blessing to help a patient recover.

43. Hindu honorific SRI
“Sri” is a title of respect for a male in India.

46. Refrigerator predecessor LARDER
The Latin word for bacon or lard, is “lardum”, from which developed a Middle Latin word “lardarium” meaning a “room for meats”. This came into English as “larder” to describe a meat storeroom. Over time, our larders stored all types of foods and our fresh meats went into refrigerators.

47. “Twelfth Night” duke ORSINO
Orsino, Duke of Illyria is a character in William Shakespeare’s “Twelfth Night”. The opening lines of the play, spoken by the love-smitten Orsino, are:

If music be the food of love, play on,
Give me excess of it; that surfeiting,
The appetite may sicken, and so die.

50. Nine-day prayer ritual NOVENA
In the Roman Catholic tradition, a “novena” is a set of prayers or services that are repeated over nine successive days. “Novena” derives from the Latin “novem” meaning “nine”.

54. Bear and Berra YOGIS
Yogi Bear made his debut for Hanna-Barbera in 1958, on the Huckleberry Hound Show before he was given his own series. Do you remember that collar that Yogi wore around his neck? That was a little trick from the animators. By using the collar, for many frames all they had to do was redraw everything from the collar up, saving them lots and lots of time.

61. Month, in Madrid MES
Madrid is the largest city in Spain and the capital. Madrid is located very close to the geographical center of the country. It is the third-largest city in the European Union (after London and Paris). People from Madrid called themselves Madrileños.