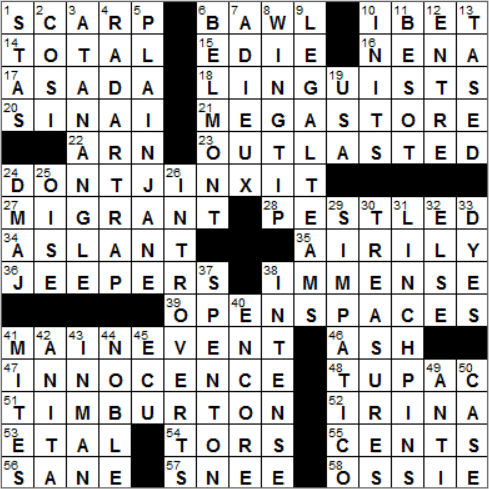 Today’s Wiki-est, Amazonian Googlies
Across
1. It’s a bluff SCARP
A scarp is a steep slope or a line of cliffs, especially one created by erosion. An alternative name is an escarpment.

14. Kit and kaboodle TOTAL
In the idiomatic expression “the whole kit and caboodle”, caboodle (sometimes spelled “kaboodle”) is an informal term for a bunch of people, or sometimes the “the whole lot”.

15. She plays Jackie on “Nurse Jackie” EDIE
“Nurse Jackie” is a comedy-drama series centered on an emergency room nurse at a hospital in New York City. The lead character is played by Edie Falco, who also played Tony Soprano’s wife on the “The Sopranos”.

16. “99 Luftballons” band NENA
Nena is a German singer (“Nena” became the name of her band as well) who had a big hit with one of my favorite songs of the eighties “99 Luftballons”. The English translation of the German title (“99 Red Balloons”) isn’t literal, with the color “red” added just so that the title had the right number of syllables for the tune. “Luftballon” is the name given to a child’s toy balloon in German.

20. Six-Day War setting SINAI
The Six-Day War took place from June 5th to June 10th, 1967, and was fought between Israel and its neighbors Egypt, Jordan and Syria. By the time the ceasefire was signed, Israel had seized huge swaths of land formerly controlled by Arab states, namely the Gaza Strip, the Sinai Peninsula, the West Bank of the Jordan River and the Golan Heights. The overall territory under the control of Israel grew by a factor of three in just six days.

21. Target, say MEGASTORE
Target Corporation was founded by George Draper Dayton in 1902 in Minneapolis, Minnesota as Dayton Dry Goods Company. Dayton developed into a department store, and the company opened up a discount store chain in 1962, calling it Target. Today Target is the second-largest discount retailer in the country, after Walmart.

23. Beat on “Survivor” OUTLASTED
The reality show “Survivor” is based on a Swedish television series created in 1997 called “Expedition Robinson”.

24. Superstitious admonition DON’T JINX IT
A jinx is a charm or a spell, and the word “jinx” comes from an older word “jyng” from the 17th-century. A “jyng” was another word for the wryneck, a type of bird much used in witchcraft.

28. Crushed, as a spice PESTLED
I’ve always loved the sound of the words “mortar” and “pestle”, ever since I was first introduced to them in the chemistry lab. The Romans called a receptacle for pounding or grinding things a “mortarium”, giving us “mortar”. Mortarium was also the word for the product of pounding and grinding, which gives us our “mortar” that’s used with bricks to build a wall. And further, short stubby cannons used in the 16th century resembled a grinding bowl and so were called “mortars”, which evolved into our contemporary weapon of the same name. As far as the pestle is concerned, it is also derived from its Latin name “pistillum”, which comes from the word for “crush”.

48. First name in rap TUPAC
Rapper Tupac Amaru Shakur adopted the inventive stage name “2Pac”. He was a hard man, spending eleven months in prison for sexual assault. At only 25 years of age he was killed in a drive-by shooting in Las Vegas.

51. “Sleepy Hollow” director TIM BURTON
Movie director and producer Tim Burton makes my least favorite types of movie: dark, gothic, horror fantasies. The list of his titles includes “Edward Scissorhands”, “Sleepy Hollow”, “Sweeney Todd”, “Charlie and the Chocolate Factory” and “Alice in Wonderland”. Also included in each of these movies is Johnny Depp in a starring role, as Depp and Burton are good friends and frequent collaborators. Another frequent star in Burton movies is English actress Helena Bonham Carter, who has been his domestic partner since 2001.

“Sleepy Hollow” is a Tim Burton film released in 1999. It is a screen adaptation of the short story “The Legend of Sleepy Hollow” by Washington Irving. Stars of the film are Johnny Depp and Christina Ricci.

52. One of Chekhov’s “Three Sisters” IRINA
Olga, Masha and Irina were the “Three Sisters” in the play by Anton Chekhov. The three title characters were inspired by the three Brontë sisters, the English authors.

57. Weapon of yore SNEE
“Snick or snee” is the name given to cut and thrust while fighting with a knife. The phrase is rooted in a pair of Dutch words and it gave its name to a “snee”, a light sword-like knife.

58. “Grumpy Old Men” actor Davis OSSIE
Ossie Davis was a very successful African-American actor, but also a director, poet, playwright and social activist. One of Davis’s better known performances was in the 1993 movie “Grumpy Old Men”, in which he played the owner of the bait shop by the lake.

“Grumpy Old Men” is a wonderful romantic comedy film from 1993 starring the great actors Jack Lemmon, Walter Matthau and Ann-Margret along with an excellent supporting cast. “Grumpy Old Man” was the sixth on-screen collaboration between Lemmon and Matthau, but the first in over a decade.

Down
1. King’s Cross and others: Abbr. STAS
King’s Cross is a large railway station in London that first opened for business in 1852. The station is named for King’s Cross, the area of the city in which it is located. In turn, the King’s Cross area takes its name from a monument to King George IV that no longer exists. The station is well-known to many young people around the world as it is from King’s Cross that the Hogwarts Express departs (from the secret platform 9¾) in the “Harry Potter” series of books.

2. Mozart title starter COSI
Mozart’s comic opera “Così fan tutte” is also known in English as “The School for Lovers”. The literal translation of the opera’s title is “Thus do all (women)”, or “Women are like that”.

4. Gun site RADAR TRAP
Scientists have been using radio waves to detect the presence of objects since the late 1800s, but it was the demands of WWII that accelerated the practical application of the technology. The British called their system RDF standing for Range and Direction Finding. The system used by the US Navy was called Radio Detection And Ranging, which was shortened to the acronym RADAR.

6. Last of an annual trio BELMONT
The Belmont Stakes is a horse race held in June each year, at Belmont Park racetrack in Elmont, New York. The Belmont is the last of the US Triple Crown races, following the Kentucky Derby and the Preakness.

7. Ciao relatives ADIEUX
“Adieu” is the French for “goodbye” or “farewell”, from “à Dieu” meaning “to God”. The plural of “adieu” is “adieux”.

“Ciao” is Italian for “‘bye”. “Arrivederci” is more formal, and translates better as “goodbye”.

8. Certain brogue WINGTIP
A brogue is more commonly called a wingtip here in the US, I think. The shoe design originated in Ireland and Scotland, and “brog” the Irish word (and similar Scottish word) for shoe gives rise to the name. The brogue/wingtip design includes decorative perforations in the leather uppers. The toe cap of a brogue curves back in a shape that suggest the tip of a brid’s wing, hence the alternative name.

11. Inebriate BESOT
Our word “sot” comes from the Old English “sott”, meaning a fool. The word “sot” started to be associated with alcohol and not just foolery in the late 1500s.

12. Between, to Berlioz ENTRE
Hector Berlioz was a French composer active in the Romantic period. Berlioz’s most famous work is probably his “Symphonie fantastique”.

13. Extremely shocked? TASED
Victor Appleton wrote a novel for young adults called “Tom Swift and His Electric Rifle”. The company that developed the TASER electroshock weapon named its product as a homage to the novel. The acronym TASER stands for “Thomas A. Swift’s Electric Rifle”.

19. World Cup chant USA!
The 1994 FIFA World Cup was held in the US, with nine cities across the country acting as host. The average attendance at the games was about 69,000, which set a record for a FIFA World Cup that persists to this day. Brazil won the tournament, beating Italy in a penalty shootout.

24. Key of Pachelbel’s Canon: Abbr. D MAJ
Johann Pachelbel was a composer from Germany active in the Baroque Era. Pachelbel’s music was very popular during his own lifetime, and today his best-known work is his “Canon in D”. which has become one of the most popular choices during modern wedding ceremonies.

25. River through northern France OISE
The River Oise rises in Belgium and joins up with the River Seine just outside Paris.

29. Like-minded SIMPATICO
Someone described as “simpatico” is likable, or like-minded. The term comes into English via Spanish or Italian from the Latin “sympathia” meaning “community of feeling”.

31. Vital components LINCHPINS
A linchpin is a clip or fastener that is used on the end of an axle to prevent a wheel from sliding off. The term is also used figuratively to describe anything that is a vital element in a system.

40. Request for more ENCORE
“Encore” is French for “again, one more time”, and is a shout that an audience member will make here in North America to request another song, say. But, the term is not used this way in France. Rather, the audience will shout “Bis!” instead, which is the Italian for “twice!”

41. Pittances MITES
A mite is a small amount, as in “the widow’s mite”, the story from the Bible.

42. Jazz singer O’Day ANITA
Anita O’Day was the stage name of the jazz singer Anita Colton. O’Day had problems with heroin and alcohol addiction leading to erratic behavior and earning her the nickname “The Jezebel of Jazz”.

43. “Cold Mountain” hero INMAN
The novel “Cold Mountain” was written in 1997 by Charles Frazier. It’s the tale of a deserter in the Civil War named W. P. Inman and his trek home to his beloved Ada Monroe, who is living the rural community of Cold Mountain in North Carolina. The plot has been compared with Homer’s “The Odyssey”, which tells of the long journey home of Odysseus to Ithaca after the Trojan War. In the 2003 film adaptation of the same name, Ada Monroe is played by Nicole Kidman, and Inman is played by Jude Law.

45. Coin first minted under Louis IX ECU
The ecu is an Old French coin. When introduced in 1640, the ecu was worth three livres (an older coin, called a “pound” in English). The word “ecu” comes from the Latin “scutum” meaning “shield”. The original ecu had a coat of arms on it, a shield.

Louis IX was the King of France from 1226 until 1270. Louis IX is the only king of France to have been made a saint. This Saint Louis was the man who gave his name to the city of St. Louis, Missouri.