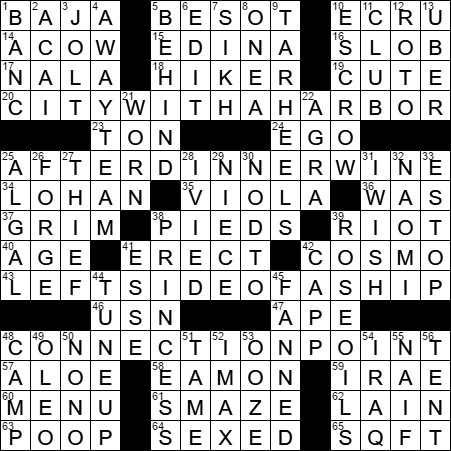 Today’s themed answers are all clued with “Port”.

The Doobie Brothers are a rock band from San Jose, California, and aren’t brothers at all. Apparently the band took their name from their fondness for “doobies”, a slang term for marijuana cigarettes.

Don’t forget that we use the spelling “whiskey” for American and Irish versions of the drink, and “whisky” for Scotch, the Scottish version.

Cosmo Kramer is the outrageous character played by Michael Richards on “Seinfeld”. “Seinfeld” co-creator, Larry David, introduced Kramer into the story, basing the character on real-life comedian Kenny Kramer who used to live across the hall from him.

Éamon de Valera was a very influential statesman in Ireland. He served three separate terms as head of government between 1937 and 1959, and was then President of Ireland from 1959 until 1973. De Valera was actually born in New York City, but was sent back to Ireland by his mother at the age of two when his father died. Éamon participated in the 1916 Easter Rising against the British in Ireland, after which he was the only battalion commander who was not executed. Several factors saved de Valera, including the fact that he was born in the US.

“Smaze” is a weather phenomenon, a smoky haze that is like a fog but less damp. The term is a portmanteau of “smoke” and “haze”.

A poop deck is a deck located on the roof of the cabin at the stern of a ship. The term “poop” comes from the French “poupe” meaning “stern”. Not too long ago we replaced the deck in our backyard, and now actually have two of them, one higher than the other. We’ve christened the lower of the two “the poop deck”. Darned dog …

“Banc” is the French word for bench or seat.

One type of escrow account is held by a trusted third party for two parties who have some contractual arrangement, an arrangement that is often in dispute. The third party only releases the funds when both parties have fulfilled their contractual obligations.

We call carbonated water “club soda”, because Club Soda used to be a brand name. The Club brand of drinks is actually Irish, owned by a company now known as C&C. As kids, we grew up on Club Orange and Club Lemon. Club Soda, not so much …

The rototiller (or rotary tiller) was invented by Arthur Clifford Howard in 1912, in Australia.

The famous ballpark that is home to the Chicago Cubs was built in 1914. Back then it was known as Weeghman Park, before becoming Cubs Park when the Cubs arrived in 1920. It was given the name Wrigley Field in 1926, after the owner William Wrigley, Jr. of chewing gum fame. Wrigley Field is noted as the only professional ballpark that has ivy covering the outfield walls. The ivy is a combination of Boston Ivy and Japanese Bittersweet, both of which can survive the harsh winters in Chicago.

That would be a flower girl at a wedding.

Attar is a fragrant essential oil obtained from flowers, and the term often particularly refers to attar of roses.

The Roman forum was the public space in the middle of a city, taking it’s name from the Latin word “forum” meaning “marketplace, town square”. “The Roman Forum” is most famous example of such a space. The Forum is at the heart of the city of Rome, is surrounded by the ruins of several ancient government buildings, and has been referred to as the most celebrated meeting place in the world.

“Li’l Abner” was created and drawn by Al Capp for over 43 years starting in 1934. Al Capp stopped producing the strip in 1977, largely due to illness (he died from emphysema two years later). As the strip finished up, he went so far as to apologize to his long-standing fans, saying that he should have stopped 3-4 years earlier as he felt that the quality of his work had gone down in those latter years. The comic strip character’s full name is “Li’l Abner Yokum”.

48. Where much tie-dyeing takes place : CAMP