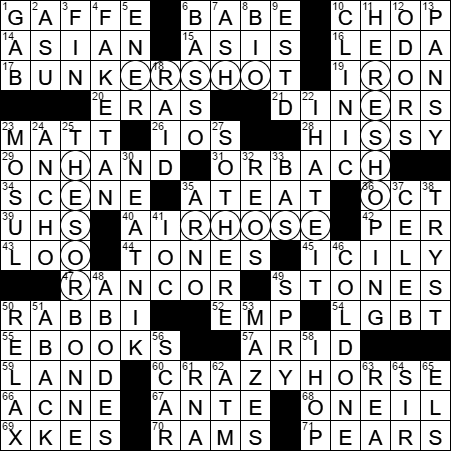 Today’s themed answers each contain the letter string H-O-R-S-E, but in a CRAZY arrangement, all mixed up:

Our word “gaffe” , meaning a social blunder, comes from the French “gaffe” meaning “clumsy remark”, although it originally was the word for “boat hook”. The exact connection between a boat hook and a blunder seems to be unclear.

The vast Asian country called India takes its name from the Indus River. The name “Indus” in turn comes from the Sanskrit “Sindhu” that can be translated as “a body of trembling water”. India is the second-most populous country in the world (after China), and the most populous democracy.

In American diners and cafes, a “blue-plate special” is a low-priced meal, one that is often offered for just that day. The exact origin of the phrase seems unclear. One suggestion is that it is a reference to divided dinner plates with separate sections for each element of the dish (similar to a contemporary frozen dinner tray). Such plates were common during the Depression, and were often completely blue in color, or decorated with a blue willow pattern.

Jerry Orbach was an American actor, noted for playing one of the lead detectives in “Law & Order” on television. Orbach also provided the voice for the character Lumière in the Disney feature “Beauty and the Beast”, and had an important role in the great movie “Dirty Dancing” playing Dr. Jake Houseman, Baby’s father.

The Canadian Thanksgiving holiday predates the related celebration in the US. The first Canadian Thanksgiving was held in 1578 by an explorer from England named Martin Frobisher. Frobisher was giving thanks for his safe arrival in the New World, and made the observance in the month of October as this was a tradition in England. All this happened 43 years before the pilgrims landed in Plymouth, Massachusetts.

It has been suggested that the British term “loo” comes from Waterloo (water-closet … water-loo), but no one seems to know for sure. Another suggestion is that the term comes from the card game of “lanterloo” in which the pot was called the loo!

Sir John Harington was an author and a member of the court of Queen Elizabeth I of England. However, Harington is perhaps best remembered as the inventor of the flush toilet. Our slang term “john”, meaning “toilet”, is thought to be a reference to John Harington.

The word “Torah” best translates as “teaching”, I am told.

Napoleon Bonaparte was serving as an artillery officer when the French revolution started in 1789. He rose through the ranks of the army quite quickly and notably led a successful campaign in Egypt and Syria in 1798 that was sponsored by the Directoire that ruled France after the Revolution. On his return to France, Napoleon staged a coup, overthrowing the Directoire and establishing himself as First Consul of the Republic in 1799. In 1804, he went further by declaring himself the first Emperor of the French as Napoleon I.

Roger O’Neil is a news reporter who has worked for NBC for over 30 years.

Mosul is located in northern Iraq and is the third largest city in the country, after Baghdad and Basra.

An “ancho” is a dried poblano pepper. The poblano is a relatively mild chili.

The Sorbonne is the name usually used for the old University of Paris, and some of the institutions that have succeeded it. The institution was named for French theologian Robert de Sorbonne who founded the original Collège de Sorbonne in 1257. That’s quite a while ago …

A fanzine (also “zine”) is a fan publication with a very limited circulation, dealing with a very specific subject matter. Fanzines are usually desktop published and distributed electronically or as photocopies.

In its most general sense, a “tryst” is a meeting at an agreed time and place. More usually we consider a tryst to be a prearranged meeting between lovers. The term comes from the Old French “triste”, a waiting place designated when hunting. Further, a tryst taking place at lunchtime is sometimes referred to as a “nooner”.

The symbol of the Olympic Games consists of five interlocking rings, with each ring representing one of the five continents involved in the Olympics. The five continents are Europe, Asia, Africa, Oceania and America (North and South combined). The symbol was designed in 1912, adopted in 1914, and introduced at the 1920 Games.