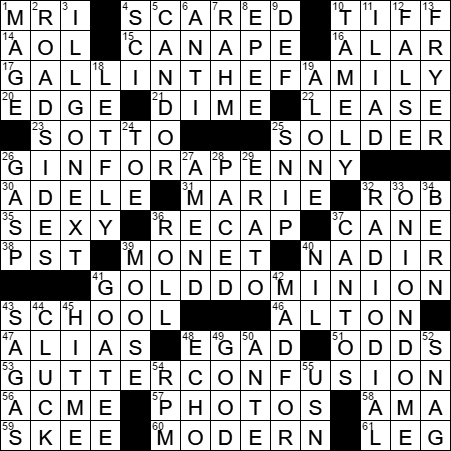 Each of today’s themed answers is a common phrase, but with a letter G added at the front:

A canapé is a finger food, usually small enough to eat in just one bite. In French, “canapé” is actually the word for a couch or a sofa. The name was given to the snack as the original “canapés” were savories served on toasted or stale bread that supposedly resembled a tiny “couch”.

“All in the Family” is an American sitcom, a remake of the incredibly successful BBC show called “Till Death Us Do Part”. Both the UK and US versions of the sitcom were groundbreaking in that the storyline brought into focus topics previously considered unsuitable for a television comedy, including racism, homosexuality, women’s liberation, menopause and impotence. “All in the Family” is one of only three TV shows that has topped the Nielsen ratings for five consecutive seasons (the other two are “The Cosby Show” and “American Idol”). Stars of the show are:

The spirit known as gin gets its unique flavor mainly from juniper berries. The name “gin” comes into English from the translation of “juniper” from either French (genièvre), Dutch (jenever) or Italian (ginepro).

Marie Curie lived a life of firsts. She was the first female professor at the University of Paris, the first woman to win a Nobel Prize, and indeed was the first person to win two Nobel prizes (in Physics 1903, and in Chemistry in 1911). Most of Curie’s work was in the field of radioactivity, and was carried out in the days when the impact of excessive radiation on the human body was not understood. She died from aplastic anemia, caused by high exposure to radiation. To this day, Curie’s personal papers are kept preserved in lead-lined boxes as they are highly radioactive, even her personal cookbook.

Being a chemist myself by training, I have nothing but admiration for Linus Pauling, perhaps America’s greatest chemist of all time. Pauling is the only person to have individually been awarded two Nobel Prizes (for Chemistry in 1954, and the Peace Prize in 1962). During WWI he worked on military research & development, but after the war he adopted the pacifist views of his wife and led a campaign to ban above-ground nuclear testing, for which he was awarded his Peace Prize.

Apparently candy canes were created at the behest of the choirmaster at Cologne Cathedral in Germany in 1672. The sweet sticks were basically used as bribes to keep children quiet during services. The choirmaster specified that the candy sticks should have a crook at the top so that they reminded the children of the three shepherds who visited the infant Jesus just after his birth.

Spokane, Washington is named for the Spokan people who lived in the eastern portion of Washington and northern Idaho. Back in 1974, Spokane was the smallest city ever to host a World’s Fair. The theme of the fare was “the environment”, which I suppose was ahead of its time. Notably, Expo ’74 was the first American-hosted World’s Fair attended by the Soviet Union after WWII.

Giverny is a commune in northern France, most famous as the location of artist Claude Monet’s home. It was in Giverny that Monet produced his famous “Water Lilies” series of paintings.

Fort Knox is actually a US Army base, but it lends its name to the adjacent facility that is more correctly called the United States Bullion Depository. Most of the US gold reserves are in “Fort Knox”, although it isn’t the biggest gold repository in the US. That honor goes to the vault under the Federal Reserve Bank of New York in Manhattan. Most of the gold stored in the New York vault belongs to foreign nations and banks.

Alton Brown is a celebrity chef who is behind the Food Network show “Good Eats”, and the host of “Iron Chef America”.

“Cutthroat Kitchen” is a reality television show that airs on Food Network. It’s all about four chefs competing to cook the best gourmet dishes for a celebrity judge.

The “acme” is the highest point, coming from the Greek word “akme” which has the same meaning.

Mage is an archaic word for a magician.

Chicago Mayor Rahm Emanuel was an Illinois representative in the US House before resigning to take up President Obama’s offer to become the White House Chief of Staff.

In William Shakespeare’s “Macbeth”, one of the more famous soliloquies starts with, “Is this a dagger which I see before me …?” There isn’t an actual dagger in front of Macbeth, but instead he sees the vision of a dagger pointing at King Duncan’s bedchamber, perhaps suggesting that he should go ahead with his plan to murder the King.

Is this a dagger which I see before me,
The handle toward my hand? Come, let me clutch thee.
I have thee not, and yet I see thee still.
Art thou not, fatal vision, sensible
To feeling as to sight? or art thou but
A dagger of the mind, a false creation,
Proceeding from the heat-oppressed brain?

The onion dome is a common form for church domes in Russia and Orthodox churches across the globe.

The crusty roll known as a Kaiser roll was invented in Vienna, Austria. It is thought that the “Kaiser” name was applied in honor of Austrian Emperor Franz Joseph I.

“El canto” is Spanish for “the song”.

The city of Seville is the capital of Andalusia in southern Spain. Seville is a favored setting for many operas including “The Barber of Seville” by Rossini, “Fidelio” by Beethoven and Mozart’s “Don Giovanni” and “The Marriage of Figaro”.

Buffalo Bill Cody was a great showman after he retired from the US Army. While serving in the Army, Buffalo Bill was awarded the Medal of Honor. William Frederick Cody earned his “Buffalo Bill” nickname while supplying buffalo meat to the Kansas Pacific Railroad. Cody “hunted” and slaughtered over 4,000 American bison in an 18-month period to fulfill his contract with the railroad.

53. Result of way too many leaves in the eaves? : GUTTER CONFUSION (G + “utter confusion”)

13. Potatoes may be cooked in one : FRYER

32. One moving with frequency? : RADIO DIAL

49. Above the crossbar and between the uprights : GOOD