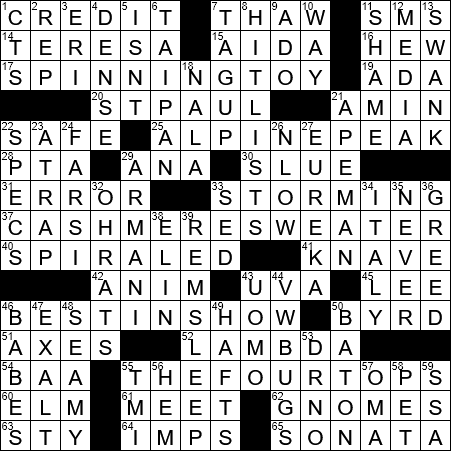 St. Teresa of Avila (also known as “St. Teresa of Jesus”) was a Carmelite nun living in Spain in the 1500s. She is particularly noted for her writings on Christian meditation and mental prayer.

“Aida” is a famous opera by Giuseppe Verdi that is actually based on a scenario written by French Egyptologist Auguste Mariette. Mariette also designed the costumes and stages for the opening performance. The opera was first staged in 1871 in an opera house in Cairo. In the storyline, Aida is an Ethiopian princess brought into Egypt as a slave. Radames is an Egyptian commander who falls in love with her, and then of course complications arise!

Saint Paul that is the state capital of Minnesota, and is one half of the “Twin Cities” , also known as Minneapolis-Saint Paul. Saint Paul used to be called Pig’s Eye, named after a popular tavern in the original settlement in the area. In 1841, Father Lucien Galtier established a log chapel nearby that he dedicated to St. Paul the Apostle, giving the city it’s current name. The magnificent Cathedral of St. Paul now sits on the site where the log chapel was built.

“Blade Runner 2049” is a 2017 sequel to 1982’s “Blade Runner”. Harrison Ford appears in both movies. He has stated that he is open to appearing in another sequel, about which there is a lot of chatter.

“To slue” (also “slew) is to turn sharply, or to rotate on an axis.

Cashmere wool comes from not only the Cashmere goat, but also from other types of goat. Technically, cashmere isn’t really a wool, but rather a hair. Unlike hair, wool is elastic and grows in clusters.

We’ve been using “knave” to mean a cad since about 1200, and as an alternative name for the jack in a deck of cards since the mid-1500s. “Knave” comes from the Old English word “cnafa”, a “boy, male servant”.

As one might expect, the Italian word “animato” is used in a musical score to indicate that one should play “spiritedly”.

Lee Majors is the actor best known for his roles on television. He played Heath Barkley on the Western show “The Big Valley” from 1965 to 1969, Steve Austin on the sci-fi show “The Six Million Dollar Man” from 1973 to 1978, and Colt Seavers on the action show “The Fall Guy”. Majors has been married four times, including to fellow actor Farrah Fawcett from 1973 to 1979.

The first Westminster Kennel Club Dog Show was held in 1877, which makes it the second oldest sporting event in the country (narrowly beaten out by the Kentucky Derby, first run in 1875). The show was originally limited to gun dogs and was established by a group of hunters who routinely met at the Westminster Hotel in Manhattan, New York.

50. Admiral who explored the Antarctic : BYRD

Rear Admiral Richard Byrd was an officer in the US Navy, famous as an aviator and explorer of the polar regions. Byrd was the first person to cross the South Pole by air, in 1929. Three years earlier, Byrd claimed he had flown over the North Pole, and would have been the first person to have done so if this was true. But whether or not Byrd actually made it over the North Pole continues to be the subject of much debate.

The Greek letter lambda is equivalent to the letter L in our modern Latin alphabet. The uppercase lambda resembles the caret character on a keyboard (over the number 6 key).

The American word “scalawag” meaning “rogue” was used as a nickname for southern white people who supported reconstruction after the Civil War.

The euro is divided in 100 cents, sometimes referred to as “euro cents”. Some countries within the European Union (Ireland, for example) have taken steps to withdraw the 1-cent and 2-cent coins from circulation by allowing cash transactions to be rounded to the nearest five cents. I found it a little odd when buying something in Ireland recently that was priced at 99 cents, and getting no change after handing over a euro coin …

“Tai-Pan” is a novel by James Clavell, and the second in his famous “Asian Saga” suite of six titles. The six books are, in order of publication:

7. Prepare to advance after a fly ball : TAG UP

The actress Hilary Swank had her first major role in “The Next Karate Kid” released in 1994, in which she played the first female student of the sensei Mr. Myagi.

“Farsi” is one of the local names for Persian, an Iranian language.

Sweet’n Low is an artificial sweetener with saccharin as the main ingredient. At least that’s in the US. In Canada the main ingredient is sodium cyclamate. Saccharin was banned in Canada in 1977 due to fears that the sweetener causes cancer. The original studies showing the incidence of cancer in lab rats were eventually shown to be faulty, and so the ban was lifted in 2014.

Elin Nordegren is the ex-wife of Tiger Woods. Nordegren is a native of Sweden, and it was back in Sweden that she was hired as a nanny by the wife of golfer Jesper Parnevik. The job brought her to the US, where she met Tiger Woods. The pair were married in 2004, and have two children together: Sam Alexis born in 2007, and Charlie Axel born in 2009. The marriage fell apart after Woods admitted to infidelity and the couple divorced in 2010.

“REM” is an acronym standing for Rapid Eye Movement sleep. REM sleep takes up 20-25% of the sleeping hours and is the period associated with one’s most vivid dreams.

TMI (too much information!)

In the world of medicine, the suffix “-oma” is used to denote a swelling or a tumor. For example, a lipoma is a benign fatty tumor.

The Social Security Administration (SSA) was set up as part of President Franklin D. Roosevelt’s New Deal. The first person to receive a monthly retirement benefit was Ida May Fuller of Vermont who received her first check for the sum of $22.54 after having contributed for three years through payroll taxes. The New Deal turned out to be a good deal for Ms. Fuller, as she lived to 100 years of age and received a total benefit of almost $23,000, whereas her three years of contributions added up to just $24.75.