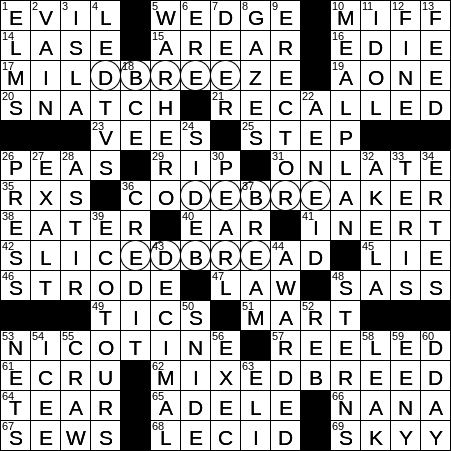 Themed answers each include a string of letters circled in the grid. Those strings are the letters in the word “BREED”, but with their order MIXED:

Apparently, geese fly in a V-formation for a couple of reasons. One is that it makes for efficient flight and conserves energy. The leading bird gets no advantage, but every following bird gets to “slipstream” a little. It has been noted that the lead bird drops to the back of the formation when he/she gets fatigued. It’s also thought that the flock can stick together more easily when in formation, so it is more difficult to lose someone along the way.

“Desire Under the Elms” is a classic American play written by Eugene O’Neill and published in 1924. It is basically a retelling of a Greek tragedy, but set in contemporary New England. Sophia Loren stars in a movie version released in 1958.

Oh how I loved my Erector Set as a kid. The version we used growing up was referred to as a Meccano set, as “Meccano” was the brand name used for for the toy sold as “Mechanics Made Easy”. The original Erector Set was developed by inventor Alfred Carlton Gilbert, and first produced in 1913. Back then it was sold as “The Erector/Structural Steel and Electro-Mechanical Builder”.

Fox’s “American Idol” is a spin-off show that was created after the amazing success of the British television show “Pop Idol”. Neither program(me) would be my cup of tea …

Aeneas was a Trojan hero of myth who traveled to Italy and became the ancestor of all Romans. Aeneas’s story is told in Virgil’s epic poem “The Aeneid”.

Publius Vergilius Maro (better known as “Virgil”) was a poet from Ancient Rome. His best known works are:

Akela is the wolf in the “Jungle Book” by Rudyard Kipling. He gave his name to a cubmaster in the scouting movement, now known as “Akela”.

The lovely Teri Garr had a whole host of minor roles in her youth, including appearances in nine Elvis movies. Garr’s big break came with the role of Inga in “Young Frankenstein”, and her supporting role in “Tootsie” earned Garr an Academy Award nomination. Sadly, Teri Garr suffers from multiple sclerosis. She is a National Ambassador for the National Multiple Sclerosis Society.

63. Collegian who roots for the Bulldogs : ELI