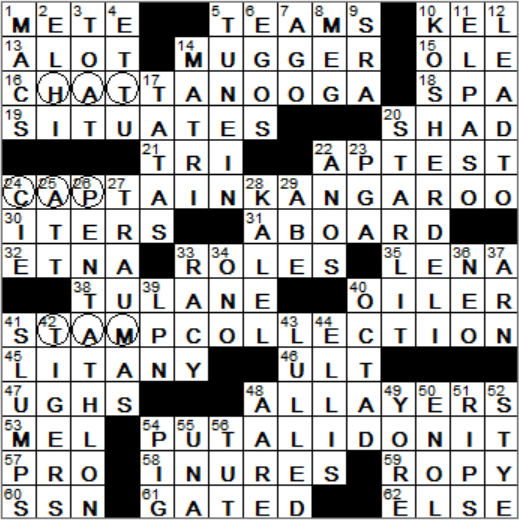 Today’s Reveal Answer: Put a Lid On It

Themed answers are common phrases with a type of LID (“headgear”) included as a hidden word, and shown with circled letters in the grid:

Just like the New York Giants, the New York Jets are based in New Jersey, headquartered in Florham Park. The Jets and the Giants have a unique arrangement in the NFL in that the two teams share Metlife Stadium in East Rutherford, New Jersey. The Jets were an AFL charter team, formed in 1959 as the Titans of New York. The Titans changed their name to the Jets in 1963.

The verb “to mug” meaning “to attack to rob” dates back to the mid-1800s. The earlier usage described a striking of the the face (the “mug”), especially in the context of boxing.

“Captain Kangaroo” is a TV series for children that CBS aired for a long, long time. The show was first broadcast in 1955, and the last show was aired nearly 30 years later in 1984. The title character was played by Bob Keeshan. Apparently Keeshan had to wear heavy makeup in the early years to make him old enough for his role. The show ran so long that Keeshan had to use makeup to look younger in the latter years.

Mount Etna on the island of Sicily is the largest of three active volcanoes in Italy, and indeed the largest of all active volcano in Europe. Etna is about 2 1/2 times the height of its equally famous sister, Mt. Vesuvius. Mt. Etna is home to a 110-km long narrow-gauge railway, and two ski resorts.

English actress Lena Headey is best known for playing Cersei Lannister on the fantasy series “Game of Thrones”. Although a British citizen, Headey was actually born Bermuda, where her father was stationed as a police officer.

Tulane University is a private research university in New Orleans, Louisiana. Tulane was founded in 1834 as the Medical College of Louisiana. The university was privatized with the aid of an endowment from philanthropist Paul Tulane in 1884, and as a result the school’s name was changed to Tulane University. The school’s sports teams use the name Tulane Green Wave, and the team mascot is Riptide the Pelican.

“The Producers” is a 1968 satirical movie written and directed by Mel Brooks, and was indeed the first film he ever directed. Brooks adapted the movie into a hugely successful Broadway musical that won a record 12 Tony Awards. The original leads in the stage show, Nathan Lane and Matthew Broderick, then appeared in a 2005 movie adaptation of the musical version of the original film.

Virtual PC for Mac is a program that lets users run Windows-only applications on a Macintosh computer.

10. Where to get gefilte fish : KOSHER DELI

Gefilte fish is a dish usually comprising patties of deboned and ground, poached carp, whitefish or pike. The dish’s name is a Yiddish term coming from the Dutch “gevulde vis” meaning “stuffed fish”. The original recipe called for the minced fish to be stuffed into the fish skin during the preparation.

In Spanish, “muchos meses” (many months) can add up to “años” (years).

“Cie.” is an abbreviation used in French. “Cie.” is short for “compagnie”, the French word for “company”, and is used as we would use “Co.”

“Strawberry Fields” is a memorial in Central Park in New York City. The memorial is a triangular piece of land found directly across from the Dakota Apartments where Lennon lived and was murdered. At the center of the triangle of land is a circular pathway mosaic of stones with the word “Imagine” in the middle. Lennon’s wife, Yoko Ono, contributed over one million dollars to help pay for the memorial’s design and upkeep.

Auburn University in Alabama was chartered in 1856 as the East Alabama Male College. The school was renamed when it was granted university status in 1960. Auburn’s sports teams are known as the Tigers, for which supporters use the battle cry “War Eagle!”

Princeton University was founded New Light Presbyterians in 1746 as the College of New Jersey in the city of Elizabeth. Ten years later, the college moved to Nassau Hall in Princeton. That same building hosted the Continental Congress during the summer of 1783. As a result, Princeton was the US capital for four months.

We use the word “yore” to mean “time long past” as in “the days of yore”. “Yore” comes from the Old English words for “of years”.