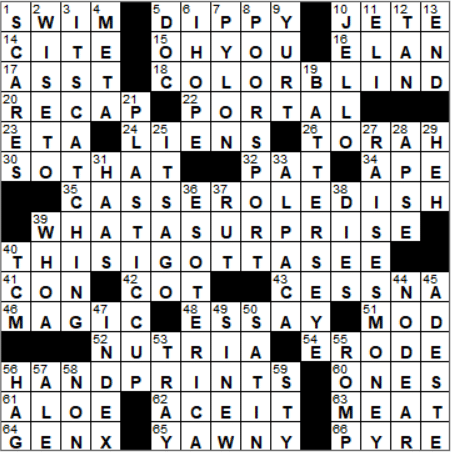 18. Unlikely to become a decorator : COLOR-BLIND

Textron is a multi-billion dollar aerospace and defense company that was founded back in 1923 as Special Yarns Company, a manufacturer of synthetic yarns. The company’s first venture into military products was the production of parachutes during WWII. Today, Textron owns well-known brands like Bell Helicopter, Beechcraft and Cessna.

The English philosopher and statesman Francis Bacon wrote a celebrated and respected collection of essays called “The Essayes”, first published in 1597. My favorite of these essays is “Of Simulation and Dissimulation”, which observes:

A baby boomer is someone who was born in the post-WWII baby boom. The rate of births had been falling fairly steadily in the US at least since 1900, but this trend was sharply reversed in 1946 after WWII. The higher birth rate continued until 1964, when it returned to pre-war levels. Since then the birth rate has continued to decline, although at a slower pace. The period between 1946 and 1964 is often defined as the “baby boom”.

A contagion is a contagious disease or a disease-producing agent. The term “contagion” ultimately derives from the Latin “com” meaning “with” and “tangere” meaning “to touch”. A distinction is sometimes made between the nouns “contagion” and “infection”, with the former referring to transmission of disease by contact, and the latter referring to transmission through the air by floating germs.

4. Like a movie about filmmakers making a movie : META

In recent decades the prefix “meta-” has started to be used as a standalone adjective. In this sense “meta” means “self-referential”, describing something that refers to itself. For example, “This sentence starts with the word ‘this’ and ends with the word ‘this’” might be called a meta sentence. A movie that is about the making of the very same movie could also be described as meta.

A pylon is a tower that is used to mark the turning point in an air race.

In a baseball field, a batter’s eye screen is a dark and solid-colored area erected beyond centerfield that provided a visual backdrop for a batter attempting to hit a pitch. At Fenway Park in Boston, the batter’s eye screen is temporary. It is a black tarp that is laid over the bleachers in center field for day games. The tarp is removed for night games as the batter can see the ball regardless of background, and then those extra seats can be sold.

Jay Haas is a former PGA golfer from St. Louis, Missouri who now plays on the Champions Tour. Haas was named Champions Tour Player of the Year for 2006.

Something described as “esoteric” is meant only for a select few with special knowledge. The term comes from the Greek “esoterikos” meaning “belonging to an inner circle”.

Injection molding is a manufacturing process in which a molten material, such as a plastic, is injected into a mold. The molten material cools, and adopts the shape of the mold. The related process of die-casting involves the pouring of molten metal into a custom-shaped die.

“Silent Sunday Nights” is a block of programming on Turner Classic Movies (TCM) that airs on Sunday evenings and features films from the Silent Era.

The phrase “cakes and ale” makes a number of appearances in literature. Aesop uses the phrase in his fable “The Town Mouse and the Country Mouse”, to symbolize the good life. Shakespeare included the line “Dost thou think, because thou art virtuous, there shall be no more cakes and ale?” in his play “Twelfth Night”. W. Somerset Maugham used the Shakespearean line as inspiration for the title of his 1930 play “Cakes and Ale, or, The Skeleton in the Cupboard”.