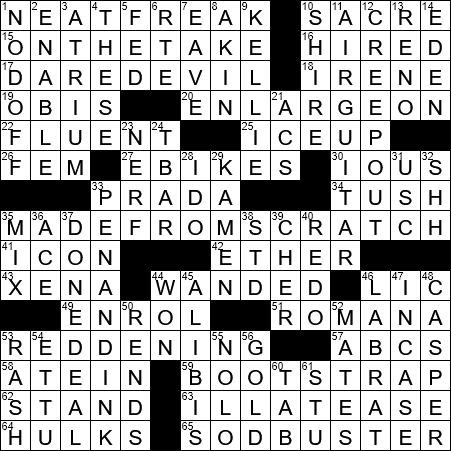 Le Havre is a city on the mouth of the river Seine on the northwest coast of France. The city’s name translates as “The Haven”.

Hurricane Irene caused extensive flooding in 2011 as it traveled through the Caribbean, up the East Coast of the United States and into the Atlantic seaboard of Canada. The hurricane was unusual in that it came so far up north. Fifty-five deaths were attributed to Irene.

A “number” is somethings that “numbs”.

43. TV heroine with a weapon called a chakram : XENA

A chakram is a throwing weapon from India. Essentially, it is a flattened metal ring with a sharpened outer edge. In popular culture, the chakram is the weapon of choice for the title character in the TV show “Xena: Warrior Princess”.

“Pax Romana” is Latin for “Roman Peace”. The term literally described a period in Roman history for the 1st and 2nd centuries AD during which the Roman Empire was ruled by Caesar Augustus. Under his control, expansionist ideas by powerful generals were held in check, and the peoples of foreign lands ruled by the Romans were relatively calm. The peace enjoyed was considered uneasy as Rome governed its conquered territories with an iron fist, and insurrection was likely at all times. The expression “pax Romana” then came to be used in English to describe any situation in which there is an uneasy peace, a peace imposed by a powerful state on a weaker state.

Pull yourself up by your bootstraps.

The Guess Who is a rock band from Winnipeg, Manitoba. The Guess Who were particularly successful in the late sixties and early seventies, and I’d say their most famous hit is “American Woman”, released in 1970.

Kellie Pickler is a country singer, and an alumna of the reality TV show “American Idol”. Pickler appeared on another reality TV show in 2013, and emerged as the winner of the 16th season of “Dancing with the Stars”, alongside her professional dance Derek Hough.

Sir Anthony Eden served as Britain’s Foreign Secretary during WWII, and then as Prime Minister from 1955-57. I think it’s fair to say that Eden doesn’t have a great reputation as a statesman. He was proud of his stance in favor of peace over war, so his critics characterized him as an appeaser. His major stumble on the world stage occurred with the Suez Crisis in 1956. Egypt’s President Nasser unilaterally nationalized the Suez Canal causing war to be declared on Egypt by Britain, France and Israel. Within a few months political pressure from the US and the USSR caused the allies to withdraw, bolstering Egypt’s national reputation. Eden never recovered from the loss of face at home, and it is felt that the stress even affected his health. Eden resigned in January 1957.

Nerf is soft material used in a whole series of toys designed for “safe” play indoors. The Nerf product is used to make darts, balls and ammunition for toy guns. “NERF” is an acronym, standing for Non-Expanding Recreational Foam.

The Segway PT is self-balancing two-wheel electric vehicle introduced to the world in 2001 by American inventor Dean Kamen.

The University of Southern California (USC) is a private school in Los Angeles. Apart from its excellent academic record, USC is known the success of its athletic program. USC athletes have won more Olympic medals than the students of any other university in the world. The USC marching band is very famous as well, and is known as the “Spirit of Troy”. The band has performed with many celebrities, and is the only college band to have two platinum records.

The producer and director George Lucas has amassed an incredibly large fortune, primarily due to the phenomenal success of his movie franchises “Star Wars” and “Indiana Jones”. Worth about $3 billion, Lucas has gone the way of Bill Gates and Warren Buffett, agreeing to give half of his fortune to charity as part of “The Giving Pledge”.

36. It makes a rally irrelevant : ACE

An ace service in tennis, for example.

“Cher” is the stage name used by Cherilyn Sarkisian. Formerly one half of husband-wife duo Sonny & Cher, she is often referred to as the Goddess of Pop. In her acting career, Cher was nominated for the Best Supporting Actress Oscar of 1984 for her performance in “Silkwood”. She went further in 1988 and won the Best Actress Oscar for playing Loretta Castorini in “Moonstruck”.

“Moonstruck” is a 1987 movie, a romantic comedy starring Cher and Nicolas Cage. There’s a bit of a love triangle in the storyline, with Danny Aiello playing the man who loses the girl. “Moonstruck” won three Oscars and was a huge success, and somehow, I’ve never seen it …

“Heart of Gold” is a song written and recorded by Neil Young in 1971. It reached the number-one spot in the American charts the following year, and was to be Young’s only chart topper in the US. “Heart of Gold” features backup vocals by James Taylor and Linda Ronstadt.

Neil Young is a singer and songwriter from Toronto, Ontario. Young is known for his solo work, as well as his earlier recordings with Buffalo Springfield and as the fourth member of Crosby, Stills & Nash. Young is also a successful movie director, although he uses the pseudonym “Bernard Shakey” for his movie work. Included in his filmography are “Human Highway” and “Greendale”.