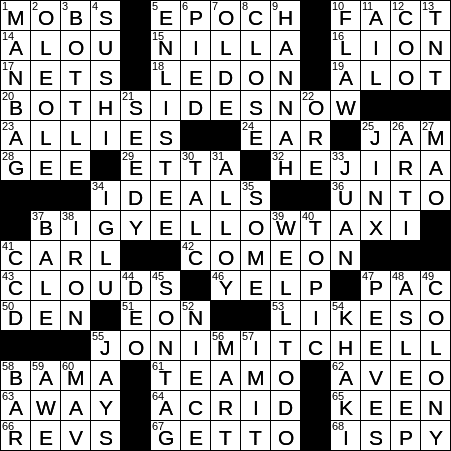 Themed answers are titles of songs and albums released by JONI MITCHELL, who is celebrating her 75th birthday today:

Moisés Alou played Major League Baseball, as did his father Felipe and his uncles Matty and Jesús.

The Barclays Center is an arena in Brooklyn, New York that is home to the Brooklyn Nets of the NBA, and to the New York Islanders of the NHL. Barclays ending up paying over $200 million for the naming rights, even though the London-based banking group has no retail banks or ATMs in the US.

“Both Sides, Now” is a very successful 1968 song written by Joni Mitchell, and most famously recorded by Judy Collins. It has been recorded many, many times by many different artists, including Leonard Nimoy would you believe?

The Allies of World War II were the countries opposing the Axis powers, the most of which were Germany, Japan and Italy. When war broke out in 1939, the Allies consisted of France, Poland and the UK, with the independent countries of the British Commonwealth, such as Australia and Canada, joining a few days later. Although the Americans provided material support to the Allies throughout the conflict, the US did not officially join until December 1941, immediately after the Japanese attack on Pearl Harbor. It took until 1942 for the member countries to agree on a formal treaty of cooperation, doing so in a document known as the Declaration by United Nations. This declaration became the basis of the United Nations (UN), with the UN Charter being signed by 50 countries in 1945.

Before WWII, Hungary’s prime minister was lobbying for an alliance between Germany, Hungary and Italy and worked towards such a relationship that he called an “axis”. The main Axis powers during the war were Germany, Italy and Japan. However, also included in the relationship were Romania, Bulgaria and the aforementioned Hungary.

AirPods are Apple’s line of bluetooth earpods. When AirPods were introduced in 2016, the market reacted with some skepticism. The left and right AirPods are not connected by any wire, so there was concern that individual earbuds could fall out of the ear, and possibly get lost. Another concern is Apple’s stated intent to abandon the wired headphone socket on new iPhone models.

“Hejira” is a 1976 album released by Canadian singer-songwriter Joni Mitchell. Mitchell wrote the bulk of the songs on the album on a road trip from Maine to Los Angeles. The album’s title comes from the Arabic word “hijra” meaning “journey”.

Joni Mitchell was looking out the window of her hotel in Hawaii in 1970 when she was inspired to write what has proved to be one of the most enduring environmentalist anthems. She looked at the lovely mountain scenery in the background, and the “heart breaking” parking lot as far as she could see in the foreground. She used the image as the opening lines for the song “Big Yellow Taxi“ that she released later that same year. The song never really became a hit, but it has a sustained, relatively low level of popularity that has lasted for decades. Personally, I love the “Big Yellow Taxi” …

They paved paradise
And put up a parking lot
With a pink hotel, a boutique
And a swinging hot spot

Joni Mitchell is a Canadian singer and songwriter from Fort MacLeod in Alberta. Mitchell is perhaps best known for her recordings “Big Yellow Taxi” and “Woodstock”.

“Hot Hot Hot” is a song written and first recorded in 1982 by Arrow, a singer-songwriter from the island of Montserrat in the Caribbean. “Hot Hot Hot” became a dance floor hit for Arrow, and then really took off when it was covered in 1987 by Buster Poindexter. Ole ole …

Sushi is a Japanese dish that has as its primary ingredient cooked, vinegared rice. The rice is usually topped with something, most often fish, and can be served in seaweed rolls. If we want raw fish by itself, then we have to order “sashimi”.

The legend of the Pied Piper of Hamelin dates back to medieval times. Recently there have been suggestions that the story is rooted in some truth, that the town of Hamelin did in fact lose many of its children, perhaps to plague. The suggestion is that the tale is an allegory. The use of the word “pied” implies that the piper dressed in multi-colored clothing.

In drama, a tragic flaw (sometimes “fatal flaw”) is a weakness or error made by the protagonist that ultimately leads to his or her reversal of fortune. “Tragic flaw” is often referred to as “hamartia”, a similar-meaning term from Greek tragedy.

During China’s Cultural Revolution, the Communist Party published a book of statements and writings from Chairman Mao Zedong. Here in the West the publication was usually referred to as “The Little Red Book”.

I wonder do the kids of today know that “cc” stands for carbon copy, and do they have any idea what a carbon copy was? Do you remember how messy carbon paper was to handle? A kind blog reader pointed out to me recently that the abbreviation has evolved and taken on the meaning “courtesy copy” in our modern world.

“Gloria in excelsis Deo” is a Latin hymn, the title of which translates as “Glory to God in the Highest”.

The Mavericks are the NBA franchise in Dallas, Texas. The team was founded in 1980, and the Mavericks name was chosen by fan votes. The choice of “Mavericks” was prompted by the fact that the actor James Garner was a part-owner of the team, and Garner of course played the title role in the “Maverick” television series.