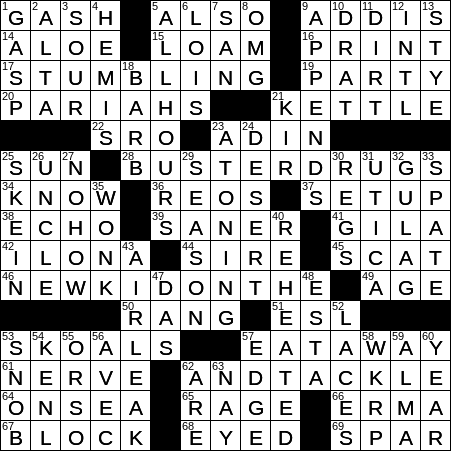 Themed answers each use a BLOCK from the grid for completion:

Addis Ababa is the capital city of Ethiopia. The city is relatively young, having being founded in 1886 by Emperor Menelik II. Addis Ababa holds an important position within the nations of Africa as it is home to many international organizations that are focused on the continent.

Loam is soil made up of sand, silt and clay in the ratio of about 40-40-20. Relative to other soil types, loam is is usually rich in nutrients and moisture, drains well and is easy to till.

16. Datum in a forensic database : PRINT

Towns on the English coast often have the suffix “-on-sea” in their names. Examples are Southend-on-Sea, Leigh-on-Sea and Frinton-on-Sea, all of which are on the southeast coast in the county of Essex.

Our expression “sour grapes” is used to describe a negative attitude adopted by somebody towards something just because that person can’t have the thing himself or herself. The phrase alludes to one of Aesop’s fables, the story of “The Fox and the Grapes”. In the fable, a squirrel could climb up to grapes high in a tree that a fox was unsuccessful in getting to. On seeing this, the fox said, “It’s okay, the grapes were sour anyway”.

“Hemi” is short for “hemisphere”, and is the name given to an internal combustion engine with hemispherical combustion chambers. Chrysler is famous for using Hemi engines in many of its models.

6. Half a Daily Planet byline : LOIS

The peculiarly American term “nohow” means “not at all”. It comes from the words “no” and “how” constructed in the same way as the earlier word “nowhere”.

The ancient city of Utica was perhaps the first colony founded by the Phoenicians in North Africa. Located in modern-day Tunisia, Utica surrendered to Rome shortly before the Third Punic War after which it became the capital of the Roman province of Africa.

The Mohawk Valley is a region in New York state located between the Adirondack and Catskill Mountains. Centered on the Mohawk river, the area includes the cities of Schenectady, Utica and Rome.

The Gulag was a government agency in the Soviet Union that administered forced labor camps. The term “gulag” was used for the camps themselves, especially when used for political dissidents. “GULag” is actually an acronym standing for the Russian “Chief Administration of Corrective Labor Camps and Colonies”.

Ensenada is a city in Baja California, Mexico which sits on the coast about 80 miles south of San Diego. Ensenada is noted as a cruise ship destination, and is also a producer of outstanding wine.

The hook-and-loop fastener that we now call “Velcro” was invented in 1941 by Georges de Mestral, a Swiss engineer. Mestral noticed that the seeds of the burdock plant (burrs or burs) stuck to his clothes. Under the microscope he found hooks on the burrs that grabbed hold of loops in his clothing. After years of development, he came up with a way of simulating the natural hook using man-made materials, and Velcro was born.

Johnny Fever is a wild and wacky disk jockey in the sitcom “WKRP in Cincinnati”. Fever is played by actor Howard Hesseman. The character was actually inspired by a real-life DJ from Atlanta named Skinny Bobby Harper.

Yeah, probably. That’s why I write this blog every day …