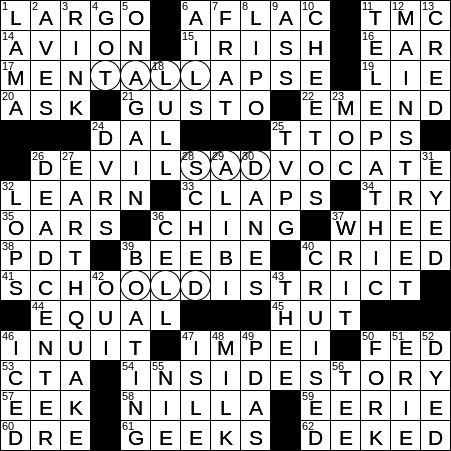 Themed answers include circled letters INSIDE that spell out a type of STORY:

In 1999, Aflac (American Family Life Assurance Company) was huge in the world of insurance but it wasn’t a household name, so a New York advertising agency was given the task of making the Aflac brand more memorable. One of the agency’s art directors, while walking around Central Park one lunchtime, heard a duck quacking and in his mind linked it with “Aflac”, and that duck has been “Aflacking” ever since …

The athletic teams of the University of Notre Dame in South Bend, Indiana are known as the Fighting Irish. There are several debated etymologies for the moniker “Fighting Irish”, with the most generally accepted being that it was applied by the press in the 1920s, reflecting the team’s’ fighting spirit and grit, determination and tenacity. I guess “grit, determination and tenacity” are characteristics often associated with the Irish.

26. One arguing for the unpopular side : DEVIL’S ADVOCATE (giving “sad story”)

In the Roman Catholic tradition, an “Advocatus Diaboli” (Latin for “Devil’s Advocate”) was a person tasked with arguing against the canonization of a candidate. We now use the phrase “devil’s advocate” in common speech to refer to someone who is arguing a position opposite to the norm or perhaps opposite to his or her own real belief.

What we usually call a cash register here in North America, we mostly call a “till” in Ireland and the UK. I haven’t heard the word “till” used much here in that sense.

William Beebe was an American explorer who was active in the first half of the 20th century. Beebe was very interested deep-sea exploration and this interest led to the development of the bathysphere by Otis Barton in 1928. Beebe accompanied Barton on the first manned descent in a bathysphere, down to 803 ft. A few years later, in 1934, the pair descended to 3,028 ft. setting a record that stood for 15 years.

A bathysphere is a submersible used in exploring the deep sea. The bathysphere is spherical in shape, so as to better resist the high pressure of deep waters. The term “bathysphere” comes from the Greek “bathus” and “sphaira” meaning “deep” and “sphere”. The vessel is simply lowered into the water on a strong cable.

It seems that the derivation of Chicago’s nickname as the “Windy City” isn’t as obvious as I would have thought. There are two viable theories. Firstly, that the weather can be breezy with wind blowing in off Lake Michigan. The effect of the wind is exaggerated by the grid-layout adopted by city planners after the Great Chicago Fire of 1871. The second theory is that “windy” means “being full of bluster”. Sportswriters from the rival city of Cincinnati were fond of calling Chicago supporters “windy” in the 1860s and 1870s, meaning that they were full of hot air in their claims that the Chicago White Stockings were superior to the Cincinnati Red Stockings.

58. Wafer named for its flavor : NILLA

Lexington Avenue in New York City is famous from many things, but my favorite fact is that it was the site of the first ever arrest for speeding in the city. In 1899 a police officer on a bicycle caught up with a cab driver who was tearing down Lexington Avenue, at the breakneck speed of 12mph …

Cheetos snacks were developed by the same guy who created Fritos, hence the similarity in name. On the market since 1948, up until the turn of the century the name was written as “Chee-tos”. Oh, and Cheetos contain pork enzymes, so vegetarians beware!

The most common street name in the US is “Second Street”. “First Street” comes in only at number three, and this is because many cities and towns forego the use of “First” and instead go with “Main” or something more historical in nature. The spooky “Elm Street” appears on the list at number fifteen.

Claire Danes is an actress from New York City who played the title role in the HBO movie “Temple Grandin”. More recently, she has been starring as Carrie Mathison in the excellent Showtime drama series “Homeland”.

49. Smooching in a crowded park and such, briefly : PDAS

Friedrich Nietzsche was a German philosopher. Not my cup of tea …