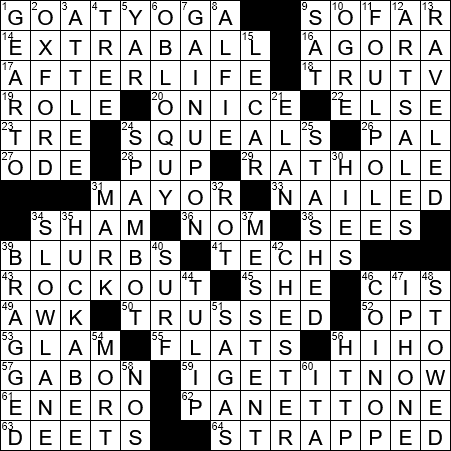 In Dante’s epic poem “The Divine Comedy”, the poet journeys through the three realms of the dead. The Roman poet Virgil guides Dante through Hell and Purgatory. Dante is guided through Heaven by Beatrice, the poet’s ideal of womanhood Beatrice

truTV is a Turner Broadcasting cable network that launched in 1991 as Court TV. The name was changed to truTV in 2008.

“Impractical Jokers” is a show that first aired in 2011 that falls into the “Candid Camera” genre, with the hosts pranking the public.

27. Neruda wrote one about the sea : ODE

“Digs” is short for “diggings” meaning “lodgings”. Where “diggings” came from, no one seems to know.

Cookie Monster is a beloved Muppet on the TV show “Sesame Street”. He is a big eater, and is especially fond of cookies, which he eats while grunting out “Om nom nom nom”.

“Polly” is a stereotypical name for a parrot.

I remember the days of glam rock so well, as it was a hugely popular genre of music in the British Isles during the early seventies. Artistes wore the wildest of clothes, big hair, shiny outfits and really high platform boots. Names associated with glam rock are T. Rex, David Bowie, Roxy Music and the infamous Gary Glitter.

David Bowie was the stage name of English singer David Jones. Bowie adopted the alter ego Ziggy Stardust during his glam rock phase in the 1970s. Sadly, Bowie passed away from liver cancer in early 2016.

57. Country on the Gulf of Guinea : GABON

Panettone is a sweet type of bread that originated in Milan, Italy. It is now served, especially at Christmas, over much of Europe. The name “panettone” comes from the Italian “panetto” meaning “small loaf cake”.

International Talk Like a Pirate (TALP) Day is September 19th every year, a “holiday” that was created in 1995. The event started out as an inside joke between John Baur and Mark Summers of Albany, Oregon, but when they shared the notion with the columnist Dave Barry, he promoted the idea and it took off.

“Obloquy” is such a lovely sounding word, and yet it describes something far from lovely, namely abusive language. The word comes from Latin “ob” (against) and “loqui” (from “to speak”).

While “ravel” can mean to get tangled up, the term is usually used to mean “unravel, disentangle”. Yep, “ravel” and “unravel” mean the same thing!

French automaker Renault made the “mini-like” Renault 5 and sold it as the Renault Le Car in North America. My Dad had a Renault 5 in Ireland, back in the day …

24. One may be foiled by a captcha : SPAMBOT

Spambots are nasty little computer programs that send out spam emails and messages, often from fake accounts. This blog alone gets about 300 spam comments a day that I have to delete, almost all of which are written by spambots.

A CAPTCHA is a challenge-and-response test that is used to determine if a user is a human or some automated program. The acronym “CAPTCHA” stands for “Completely Automated Public Turing test to tell Computers and Humans Apart”.

Mike Huckabee is a former Governor of Arkansas, and host of his own show on the Fox News Channel from 2008 until 2015. Just like President Bill Clinton, Huckabee was born in Hope, Arkansas. Mike Huckabee’s daughter, Sarah Huckabee Sanders, serves as the White House Press Secretary in the Trump administration.

President Chester Alan Arthur (CAA) came to power after the assassination of James Garfield in 1881. After Arthur was promoted to president, the office of vice president was left unfilled. The need to replace to the vice president was not called out in the US Constitution until the adoption of the 25th Amendment in 1967. Arthur was the last US president to serve without a vice president.

Grover Cleveland was the only person to have served as US President in two non-consecutive terms, and is sometimes referred to as our 22nd and 24th president. 49-year-old President Cleveland married 21-year-old Frances Folsom during his first term. This marked the only time that a president has married in the White House. And, that marriage made Frances the youngest wife of any sitting US president.

The iPhone X (pronounced “iPhone ten”) is a the eleventh generation of the iPhone, and was released in 2017 on the tenth anniversary of the original iPhone.

Mort Walker was a writer of comic strips who was best known as the man behind the iconic “Beetle Bailey” and “Hi and Lois”.

56. Letters in an internet bar : HTTP