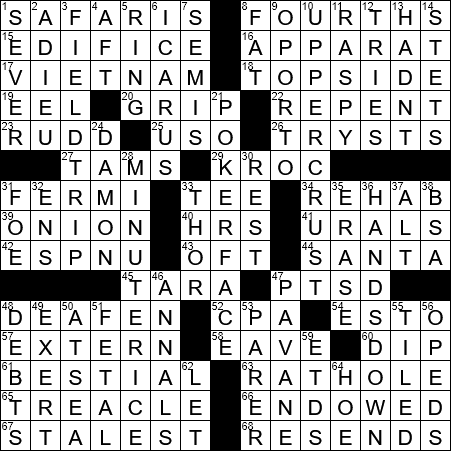 Themed answers are all in the DOWN-direction, and each starts with a type of HAND:

To edify is to provide instruction in order to improve spiritually, morally or intellectually. The intent is to “build up” someone’s faith or morality, and so “edify” comes from the Latin “aedificare” meaning “to build, construct”. This Latin root also gives us our word “edifice”, meaning “massive building”.

An apparat is a political power structure. The term “apparat” comes into English via Russian ultimately from the Latin word “apparatus” meaning “tools”. The use of “apparat” is usually derogatory due to the terms’ historical association with the oppressive communist political structure that held sway in the Soviet Union.

17. Asian setting of a 2017 PBS documentary by Ken Burns and Lynn Novick : VIETNAM

Ken Burns directs and produces epic documentary films that usually make inventive use of archive footage. Recent works are the sensational “The War” (about the US in WWII) and the magnificent “The National Parks: America’s Best Idea”, as well as 2014’s “The Roosevelts: An Intimate History”. Burns’ latest offering is 2017’s “The Vietnam War” that he co-directed with Lynn Novick.

I think Paul Rudd is a very talented actor. He has played a variety of roles in movies but is probably best known on television for playing Phoebe Buffay’s boyfriend and then husband on the sitcom “Friends”.

41. Mountains between Europe and Asia : URALS

In the field of medicine, an extern is usually a visiting physician who is not a member of the regular staff of a hospital.

The fatty component of milk is known as butterfat (sometimes “milkfat”). To be labeled whole milk, the butterfat content must be at least 3.25%. Low-fat milk is defined as milk containing 0.5-2% fat, with levels of 1% and 2% commonly found on grocery store shelves. Skim milk must contain less than 0.5% fat, and typically contains 0.1%.

14. Decides to leave in the manuscript : STETS

The “Bourne” series of films are based on a series of three “Bourne” novels penned by Robert Ludlum. The first three “Bourne” movies star Matt Damon in the title role of Jason Bourne. Damon opted out of the fourth movie (“The Bourne Legacy”), and so a new lead character was added and played by Jeremy Renner. Damon returned for the fifth film in the series, but has suggested that he is unlikely to take on the role again.

Minute Rice is a brand of “instant rice”, rice that has been pre-cooked and dehydrated. Using instant rice saves about ten minutes and cooking time, but many of the rice’s natural nutrients have been lost in the factory dehydration process.

36. Without a doubt … or what the starts of the answers to starred clues are? : HANDS DOWN

“Hands down” is used to mean “without much effort, without question”. The phrase comes from horse racing and refers to a jockey letting go of the reins just before the finishing line when faced with an easy victory.

“Annal” is a rarely used word, and is the singular of the more common “annals”. An annal would be the recorded events of one year, with annals being the chronological record of events in successive years. The term “annal” comes from the Latin “annus” meaning “year”.

A pavane is a slow dance, one in which the dancers process majestically. Pavanes were very popular in Renaissance Europe.

The word “fetus”, used for an unborn young animal, comes from Latin as one might expect. “Fetus” is the Latin word for the act of hatching or bringing forth a young animal or child. The mistaken spelling “foetus” is seen occasionally, but there’s no historical basis for adding that “o”.