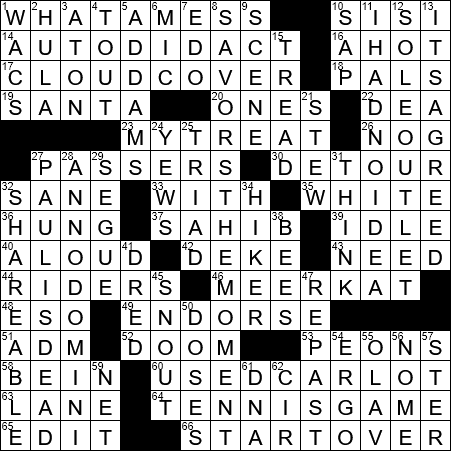 14. Teacher and student in one : AUTODIDACT

An autodidact is someone who is self-taught. The term “autodidact” comes from the Greek “autos” meaning “self” and “didaktos” meaning “taught”.

We’ve been using the term “weed” to mean “marijuana” since the 1920s. Centuries prior to that, we started using “weed” for “tobacco”.

“Snow White” is a traditional German fairy tale that was published in 1812 in the collection of the Brothers Grimm. There is also a second, very different Grimms’ Fairy Tale called “Snow-White and Rose-Red”, not to be confused with its more famous cousin. In the latter tale, Snow-White and Rose-Red are sisters who get into trouble with a dwarf, but are rescued by a bear who turns into a prince.

“Sahib” is readily recognized as a term of address used in India, where it is used in much the same way as we use “mister” in English. The term was also used to address male Europeans in the days of the British Raj. The correct female form of address is “sahiba”, but in the colonial days the address used was “memsahib”, a melding of “ma’am” and “sahib”

40. Homophone for a word of permission : ALOUD

“King Richard the Second” is a play by William Shakespeare that explores the final two years of the life of King Richard II of England.

Just before 1967’s “Summer of Love” in the Haight-Ashbury district of San Francisco, a Human Be-In was held in the city’s Golden Gate Park. The Be-In is described as a “happening”, a gathering triggered by a new state law banning the use of LSD. The term “Human Be-In” is a play on “humanist sit-in”.

That would be bowling.

5. Cartoonist with an Edgar Award : ADDAMS

The family of trees and shrubs known as yews propagate by producing a seed surrounded by soft, sweet and brightly colored aril. Birds eat the fruit and then disperse the seed in their droppings. The birds leave the seed undamaged, and so are unharmed by the potent poisons taxine and taxol that are found within the seed. The seeds are highly toxic to humans.

A triad is a group of three, and specifically in music is a chord is made up of three notes.

As every conspiracy theorist worth his or her salt knows, Paul McCartney of the Beatles died in 1966, and was then replaced with a look-alike (and who was also, apparently, a “play-alike”). McCartney (presumably the fake one) poked fun at the urban legend by using the title “Paul is Live” for a 1993 live album. The cover of that album contains many references to the “Paul is dead” conspiracy theory.

“THINK” is a slogan that longtime IBM head Thomas J. Watson first used in 1911 while he was employed by the National Cash Register Company. Watcon brought the slogan with him to Computing-Tabulating-Recording Company (later known as “IBM”) in 1914. “THINK” is now an IBM trademark, and it was used for IBM’s ThinkPad line of laptops. Many say that the Apple’s 1997 slogan “Think different” was a response to IBM’s “THINK”.

Harriet Beecher Stowe’s most famous and most successful work is “Uncle Tom’s Cabin”. It was also her first novel. Her second was published in 1856: “Dred: A Tale of the Great Dismal Swamp”.

Anything pertaining to the philosophy of the great Rene Descartes can described by the adjective “Cartesian”.

23andMe was the first company to offer direct-to-consumer genetic testing, doing so in 2007. Initially, 23andMe offered a test that determined a subject’s predisposition to a list of specific genetic traits, including baldness and blindness. The company now offers a cost-effective ancestry DNA test as well.