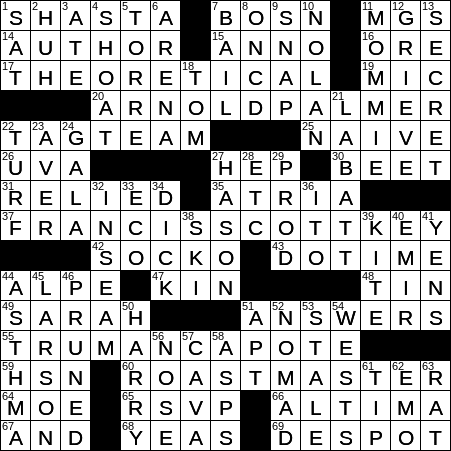 Today’s Theme (according to Bill): Tom, Dick and Harry

Sarah Paulson is an actress from Tampa, Florida and New York City. I mostly remember her for playing political commentator Nicolle Wallace in the excellent HBO drama “Game Change”.

“American Horror Story” is a horror television show … I don’t do horror.

The Friars Club is a private show-business club in New York City that has roots dating back to 1904. Back then the club was called the Press Agents Association. Within a few years the name was changed to reflect its broadening membership of actors and musicians. The name “Friar” was chosen as it comes from the Latin for “brother”, deemed to a good name for a fraternal organization. Famously, the Friars Club hosts events in which a celebrity is “roasted” by a panel of comedians and show business VIPs.

“Shoat” is a name given to a young hog after it has been weaned.

As a manager, Joe Torre was part of four World Series wins, all of them with the New York Yankees baseball team. Torre is an Italian American who was born in Brooklyn, New York. During the run up (pun intended!) to the 2006 Winter Olympics in Turin, Torre carried the Olympic flame part of the way through Florence in Italy, handing it over to the next runner at the famous Ponte Vecchio. I’d guess that was quite a thrill for him …

Joe Girardi is the manager of the New York Yankees baseball team, having taken over from Joe Torre in 2007. Girardi opted to wear the number 27 on his uniform, a visible reminder of his plan to lead the Yankees to their 27th World Series win, a feat that was achieved in 2009.

Arena rock (also “stadium rock” and “dad rock”) is a rock music played in large arenas. It is a phenomenon that dates back to the British Invasion when successful bands like the Beatles played to large audiences in places such as Shea Stadium in New York.

Queen is an English rock band that formed back in 1970. With the help of lead singer Freddie Mercury (now deceased), Queen has a long list of great hits, including “Bohemian Rhapsody”, “We Will Rock You” and “We Are the Champions”. “Bohemian Rhapsody” spent a total of nine weeks at number one in the UK. “Bohemian Rhapsody” is also the title of an outstanding 2018 biographical film about the band.

British director Christopher Nolan is best known for “rescuing” the floundering Batman movie franchise. In that series, Nolan directed “Batman Begins” and “The Dark Knight”. He was also at the helm of a couple of sci-fi movies that I really enjoyed, namely “Inception” (2010) and “Interstellar” (2014).

Comedian and actor Tom Arnold met his future wife Roseanne Barr when she hired him as a writer for her sitcom “Roseanne”. The couple soon garnered a lot of media attention, largely due to some outrageous behavior. Arnold was then labeled as a second-rate performer. That said, I think that he played a great character in the 1994 Arnold Schwarzenegger movie “True Lies”.

The Labatt Brewing Company is the largest brewery in Canada. The company was founded by John K. Labatt in London, Ontario in 1847.

“Dogie” (sometimes “dogy”) is cowboy slang for a motherless calf in a herd.

The lyrics of “The Star-Spangled Banner” were written first as a poem by Francis Scott Key. Key’s inspiration was the bombarding by the British of the American forces at Fort McHenry that he witnessed during the Battle of Baltimore in September 1814. The words were then set to the tune of a popular British drinking song penned by John Stafford Smith called “The Anacreontic Song”, with the Anacreontic Society being a men’s club in London.

In the human body, the windpipe (trachea) divides into the left and right bronchi, which enter the lungs. Inflammation of the bronchi can cause the airways to contract and narrow, leading to the condition known as asthma.

“The Far Side” is a cartoon series drawn by Gary Larson. It ran from 1980 to 1995, and continues today in reruns in many papers. A lot of “The Far Side” cartoons feature animals, often in outrageous, human-like situations. Larson was so popular with people working with animals that in 1989 a newly discovered insect species was named Strigiphilus garylarsoni. How cool is that?

Topiary is the practice of training and clipping perennial plants into clearly defined shapes.

The larger-than-life Truman “Tru” Capote was a celebrated author and comedian. Capote is perhaps most associated with his novella “Breakfast at Tiffany’s” and his true crime novel “In Cold Blood”. Truman Capote grew up in Monroeville, Alabama. There he met, and became lifelong friends with, fellow novelist Harper Lee. Capote was the inspiration for the character “Dill” in Lee’s celebrated work “To Kill a Mockingbird”. In turn, Harper Lee was the inspiration for the character “Idabel” in Capote’s “Other Voices, Other Rooms”.

Something that is germane is relevant. “Germane” originally meant “having the same parents”, but the term was used more figuratively to mean “on topic” by William Shakespeare in “Hamlet”. That’s the way we’ve been using the word since “Hamlet” was first performed in the 1600s.

The four people playing a game of bridge are positioned around a table at seats called north, east, south and west. Each player belongs to a pair, with north playing with south, and east playing with west.