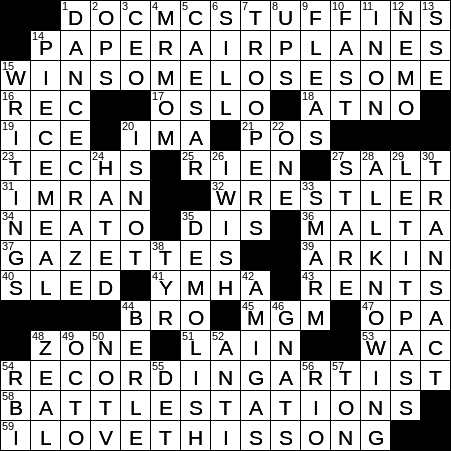 “Doc McStuffins” is an animated children’s TV show about a 6-year-old girl who fixes toys.

“Oslo” is a 2016 play by J. T. Rogers that dramatizes the behind-the-scenes negotiations that led to the Oslo I Accord between Israel and the Palestine Liberation Organization. Rogers came to write the play when he became acquainted with Norwegian diplomat Terje Rød-Larsen, who played a pivotal role in the negotiations.

Ima Hogg was the only daughter of Jim Hogg, the 20th Governor of Texas. Ima became very wealthy after the discovery of oil on the family cotton plantation. She used much of her fortune to benefit the people of Texas, and became particularly famous as a patron and collector of the arts. Hogg lived until the age of 93. She never married, even though she confided in a friend that she had received over thirty proposals of marriage.

They would be the catcher (C) and pitcher (P) on a baseball diamond.

25 It means nothing in Paris : RIEN

“Salt” is an entertaining action movie from 2010 starring Angelina Jolie in the title role. Evelyn Salt is a CIA operative accused of being a sleeper agent for Russia. Jolie wasn’t the first choice for the role, as the original intention was for Tom Cruise to play a male version of the character.

Imran Khan was elected 22nd Prime Minister of Pakistan in 2018. Prior to entering politics, Khan was a world-famous cricket player who captained the Pakistani national team 48 times.

Actor Alan Arkin won his only Oscar (Best Supporting Actor) for his role in “Little Miss Sunshine” from 2006, a movie that I just did not understand …

45 Letters associated with a lion : MGM

“Sill plate”, or simply “sill”, is an architectural term describing a bottom horizontal member to which vertical members are attached. Windowsills and doorsills are specific sill plates found at the bottoms of windows and door openings.

“Unction” is another term for “anointing”. The literal sense has been extended to the figurative usage of “smarm, superficial and earnest language”

Granada is a city and province in Andalusia in the south of Spain. Granada should not to be confused with Grenada (note the different spelling), an island nation in the Caribbean that was invaded by the US in 1983.

“Brooklyn Nine-Nine” is a sitcom set in the 99th precinct of the NYPD in Brooklyn. Star of the show is “Saturday Night Live” alum Andy Samberg, who plays Detective Jake Peralta.