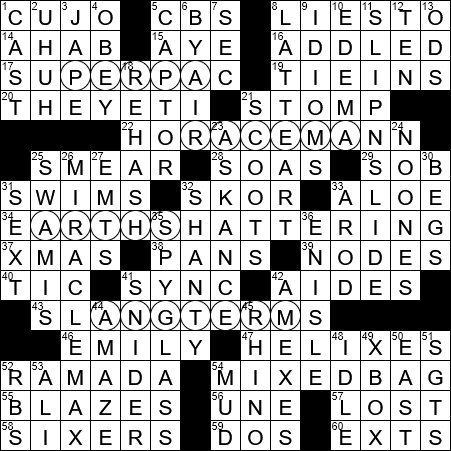 Themed answers each include a set of circled letters that give a type of BAG when the letters are “un-MIXED”:

“The Good Wife” is an excellent CBS web TV show that is a spinoff and sequel to the equally excellent legal drama “The Good Wife”. The main character in the sequel is Diane Lockhart, played by Christine Baranski. Recommended viewing …

20 Himalayan of legend : THE YETI

A “stomp” is a jazz composition with a driving rhythm and a fast tempo.

Horace Mann was Massachusetts politician, and the first Secretary of the Massachusetts State Board of Education. Mann made sweeping educational reforms in the state, with other states around the country adopting many of the policies he developed. Such was his influence that he is known by historians as the “Father of the Common School Movement”. And as an aside, Mann was brother-in-law to author Nathaniel Hawthorne.

Up until the 1500s, sharks were referred to by seamen as “sea dogs”. And that’s how we got the name “dogfish” for the family of sharks.

Skor is a candy bar produced by Hershey’s. “Skor” is Swedish for “shoes”, and the candy bar’s wrapping features a crown that is identical to that found in the Swedish national emblem. What shoes have to do with candy, I don’t know …

The abbreviation “Xmas” that is used for “Christmas” comes from the Greek letter chi (X), which is the first letter of the Greek word for “Christ” (“Χριστός”).

To pan something is to criticize it harshly.

“Gilmore Girls” is a comedy show that originally aired from 2000 to 2007 on the WB. The title characters are mother and daughter Lorelai and Rory Gilmore, played by Lauren Graham and Alexis Bledel.

The plural of “helix” is “helices” (and sometimes “helixes”).

The Ramada Inn hotel chain takes its name from the Spanish word for a shady resting place. A ramada is a shelter with a roof and no walls, mainly found in the American southwest. Nowadays a ramada can be temporary or permanent, but originally ramadas were makeshift shelters constructed by aboriginal Indians from branches or bushes.

57 TV drama that begins with the crash of Oceanic Flight 815 : LOST

The Philadelphia 76ers basketball team is one of the oldest franchises in the NBA. The “Sixers” were formed in 1946 as the Syracuse Nationals. The team moved to Philadelphia in 1963, and the name 76er was chosen in a fan contest, a name that honors the men who fought for the country’s independence in 1776.

59 Deux, across the Pyrenees : DOS

The Pyrénées is a mountain range that runs along the border between Spain and France. Nestled between the two countries, high in the mountains, is the lovely country of Andorra, an old haunt of my family during skiing season …

1 Support after a bad break? : CAST

Plaster made using gypsum is commonly referred to as plaster of Paris. The original plaster of Paris came from a large deposit of gypsum mined at Montmartre in Paris, hence the name.

“To jape” means “to joke or quip”. The exact origins of “jape” are unclear, but it does seem to come from Old French. In the mid-1600s, “to jape” was a slang term meaning “to have sex with”. No joke!

“Latte art” is the name given to the designs that can be drawn on the surface of coffee drinks. Some of those designs can be quite intricate.

Wham-O was founded in 1948, with the company’s first product being the Wham-O slingshot. Since then, Wham-O has market a string of hit toys including the Hula Hoop, Frisbee, Slip ‘N Slide, Silly String, Hacky Sack and Boogie Board.

Well, it’s certainly not my fault …

“The Princess Bride” is a novel by William Goldman written in 1973. Famously, the book was adapted into a 1987 film of the same name directed by Rob Reiner that has become a cult classic.

Our word “shanty” is used for a rough cabin. It comes from the Canadian French word “chantier”, which is a “lumberjack’s headquarters”.

45 Animal whose full name is from the Greek for “nose-horned” : RHINO

There are five types of rhinoceros that survive today, with the smaller Javan Rhino being the most rare. The rhinoceros is probably the rarest large mammal on the planet, thanks to poaching. Hunters mainly prize the horn of the rhino as it is used in powdered form in traditional Chinese medicine. The name “rhinoceros” comes from the Greek “rhino-” meaning “nose” and “keras” meaning “horn”.

The Xbox line of video game consoles is made by Microsoft. The original Xbox platform was followed by Xbox 360 and more recently by Xbox One. Microsoft’s Xbox competes directly with Sony’s PlayStation and Nintendo’s Wii.

The Los Angeles Police Department (LAPD) is the third largest local law enforcement agency in the country, after New York PD and Chicago PD. Among other things, LAPD is famous for creating the first Special Weapons and Tactics (SWAT) team in the US, in 1965.