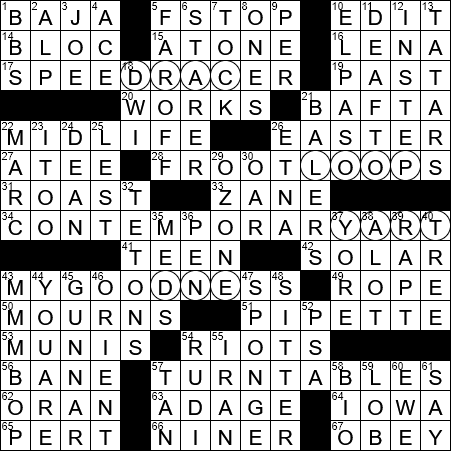 Themed answers each include a type of TABLE as a hidden word. But, that TABLE has been TURNED around:

English actress Lena Headey is best known for playing Cersei Lannister on the fantasy series “Game of Thrones”. Although a British citizen, Headey was actually born Bermuda, where her father was stationed as a police officer.

The BAFTA awards are presented annually by the British Academy of Film and Television Arts (BAFTA). The BAFTAs are the UK equivalent of the US’s Oscar and Emmy awards, all rolled into one.

A pipette (also “pipet”) is tool used in a lab to transport an accurately measured volume of liquid. Back in my day, we would suck up the liquid into the pipette by applying our mouths to the top of the instrument. This could be quite dangerous, as one ended up with a mouthful of something unsavory if one lifted the top of pipette out of the liquid too soon. Nowadays, things are much safer.

Today, we tend to use the word “bane” to mean anathema, a source of persistent annoyance. A few centuries ago, a bane was a cause of harm or death, perhaps a deadly poison.

“The Plague” is a novel by Albert Camus, first published in 1947. It is set in the Algerian port of Oran during a terrible plague.

“I too lived, Brooklyn of ample hills was mine …” is a line from the 1856 poem “Crossing Brooklyn Ferry” by Walt Whitman.

“Crossing Brooklyn Ferry” is an 1856 poem by Walt Whitman that describes his experiences and impressions crossing from Manhattan to Brooklyn on the Brooklyn Ferry. Whitman grew up in Brooklyn, and later lived there again for many years. That ferry crossed the East River in exactly the same spot where sits the Brooklyn Bridge today.

Grand Teton National Park (NP) is located just south of Yellowstone NP, and a must-see if you are visiting the latter. The park is named after the tallest peak in the magnificent Teton Range known as Grand Teton. The origins of the name “Teton” is not very clear, although my one story is that it was named by French trappers, as the word “tetons” in French is a slang term meaning “breasts”.

40 Image in the Timberland logo : TREE

“You Are” was a 1983 hit for Lionel Richie. Richie co-wrote “You Are” with his wife at that time, Brenda Harvey Richie.

Singer-songwriter Lionel Richie got his big break as a singer and saxophonist with the Commodores starting in 1968. Richie launched a very successful solo career in 1982. Richie is the father of socialite Nicole Richie, childhood friend of Paris Hilton and co-star on the Fox show “The Simple Life”.

Nelson is a rock band founded in 1989 by Gunnar and Matthew Nelson, who are twin sons of rock and roll star Ricky Nelson. You might also see the brothers perform as “Ricky Nelson Remembered”, a tribute act to their father. Together with their Dad and their grandparents Ozzie and Harriet Nelson, Gunnar and Matthew made it into the Guinness Book of Records as part of the only family to release number-one records in three successive generations (Ozzie Nelson and his orchestra had a number-one hit with “And Then Some” in 1935).

“The More You Know” is a series of public service announcements (PSAs) that have been broadcast by NBC since 1989. The spots usually feature personalities from NBC shows who deliver some sort of educational message. Then President Barack Obama participated in 2010 and 2011, as did Presidents Bill Clinton and George W. Bush after they left office.

Rudi Gernreich was a fashion designer from Austria. Gernreich fled Austria due to Nazi influence, and ended up in Los Angeles. He is noted for design of the monokini, the first topless swimsuit.