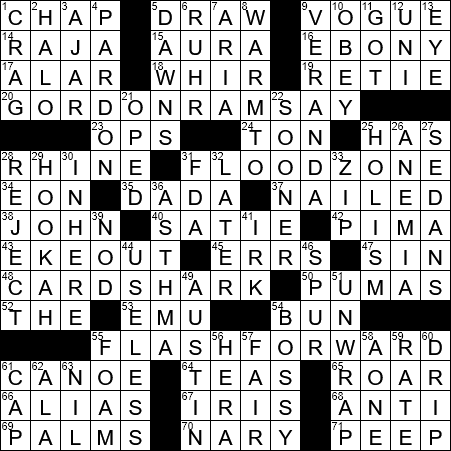 nswers each start with a kind of FLASH:

“Vogue” magazine has been published for an awfully long time, with the first issue appearing in 1892. Over the decades the magazine has picked up a lot of criticism as well as its many fans. Famously, an assistant to the editor wrote a novel based on her experiences working with the magazine’s editor, and called it “The Devil Wears Prada”.

“Raja” (also “rajah”) is a word derived from Sanskrit that is used particularly in India for a monarch or princely ruler. The female form is “rani” (also “ranee”) and is used for a raja’s wife.

Punjab is the most populous province in Pakistan and is home to over half of the country’s citizens. “Punjab” (also “Panjab”) translates as “Five Waters”, a reference to five rivers that form tributaries to the Indus River: Chenab, Jhelum, Ravi, Beas and Sutlej.

Gordon Ramsay is a celebrity chef from Scotland who appears more on US television now than he does on British TV. Personally, I think the man is pretty obnoxious.

Though the English court system does not use the term today, “John Doe” first appeared as the “name of a person unknown” in England in 1659, along with the similar “Richard Roe”. An unknown female is referred to as “JaneDoe ”, and the equivalent to Richard Roe is Jane Roe (as in Roe v. Wade, for example). Variants of “John Doe” used outside of the courts are “Joe Blow” and “John Q. Public”.

Pima is a soft cotton that is very durable and absorbent. Pima cotton is named after the Pima Native Americans who first cultivated it in this part of the world.

48 Not someone an amateur should play poker with : CARD SHARK (giving “flash card”)

A flashforward is a narrative device that temporarily moves the action in a story into the future. A famous flashforward is found in Charles Dickens’ novella “A Christmas Carol”, when Ebeneezer Scrooge is shown the potential future by the Ghost of Christmas Yet to Come.

The Ruhr is a large urban area in western Germany. The area is heavily populated, and is the fifth largest urban area in the whole of Europe, after Istanbul, Moscow, London and Paris. The Ruhr became heavily industrialized due to its large deposits of coal. By 1850, the area contained nearly 300 operating coal mines. Any coal deposits remaining in the area today are too expensive to exploit.

In Australia (Down Under), and in Britain and Ireland, the term “uni” is routinely used for “university”.

The 1889 Indian Appropriations Act officially opened up the so called Unassigned Lands, land in Oklahoma on which no Native American tribes had settled. Once the Act was signed, those lands became available for settlement. Those people that settled the same lands illegally, prior the date specified, they were termed “Sooners” as their situation was defined in the “sooner clause” of the Act. “Sooner State” is now a nickname for Oklahoma.

Holism is an approach taken to the study of systems (physical, biological, economic, etc.) that views those systems as part of a whole, and not in isolation. The term “holism” was coined in a 1926 book titled “Holism and Evolution” by Field Marshal Jan Christiaan Smuts, a philosopher and former South African prime minister.

Red blood cells are also known as erythrocytes, and are responsible for delivering oxygen from the lungs to the body’s tissues. Iron-rich hemoglobin in the cell binds the oxygen molecules, and is also responsible for the red color. While some waste carbon dioxide (CO2) is carried back to the lungs by red blood cells, most of the CO2 is transported back to the lungs as bicarbonate ions dissolved in the blood plasma.

A hookah is a water pipe, a device for smoking tobacco in which the smoke is passed through a water basin before it is inhaled.

In the human body, the windpipe (trachea) divides into the left and right bronchi, which enter the lungs. Inflammation of the bronchi can cause the airways to contract and narrow, leading to the condition known as asthma.

“Bossy” is a common name used for a cow, just like a cat might be called “Kitty”. “Bossy” comes from the Latin word “bos” meaning “ox, cow”.