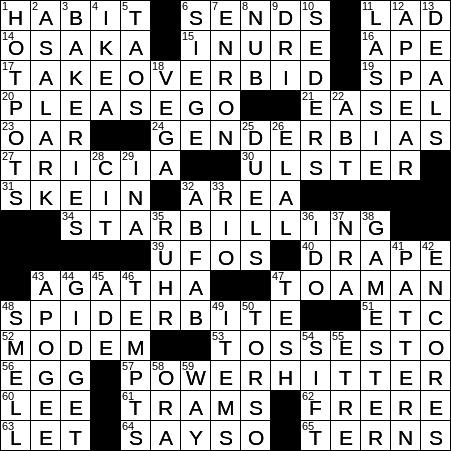 When RKO released the 1933 movie “King Kong”, the promotional material listed the ape’s height as 50 feet. During filming, a bust was created for a 40-foot ape, as well as a full-size hand that went with a 70-foot Kong.

The first video game featuring the ape called Donkey Kong was created in 1981. That same game introduced the world to the character known as Mario, four years before the game Super Mario Bros became such a big hit.

Belfast is the capital of Northern Ireland, and an important port city. That said, much of Belfast’s success as a port is in the past. In the early 1900s, the Harland and Wolff shipyard was the world’s largest. The most famous vessel built by Harland & Wolff was the RMS Titanic. Belfast was also the largest linen producing center in the world, resulting in the city being nicknamed “Linenopolis”. More recently, Belfast is noted as home to the film studios where “Game of Thrones” was produced.

A “close encounter” is an occasion when a person witnesses an unidentified flying object (UFO). The term was introduced to us in a 1972 book by Allen Hynek called “The UFO Experience: A Scientific Inquiry”. The public really became aware of the concept with the release of the excellent 1977 Steven Spielberg movie “Close Encounters of the Third Kind”.

Spider-Man is a creation of Stan Lee and Steve Ditko, and first appeared in comics in 1962. Spider-Man was a somewhat groundbreaking character in that his alter ego was a teenage high school student (Peter Parker), which marked the first time that a young person featured front and center as the superhero.

52 Link to the internet : MODEM

A soufflé is a French dish, usually served as a dessert. The verb “souffler” means “to blow, blow up”.

“Frère Jacques” is a children’s song from France. The French lyrics are:

The lyrics are usually translated into English as:

Every IKEA store features a restaurant that serves traditional Swedish food, including Swedish meatballs and lingonberry jam. Each store also has a Swedish Food Market where customers can purchase specialty foods from Sweden.

In the Jewish tradition, the Hillel sandwich plays a role in the Passover Seder. The sandwich combines matzo (unleavened flatbread) and maror (“bitter herbs”), with the combination of bitter and non-bitter having symbolic significance.

The canine character Lassie is the creation of Eric Knight, an author who wrote a short story that he expanded into a novel called “Lassie Come Home” published in 1940. “Lassie Come Home” was turned into a movie three years later, the first of a very successful franchise. The original Lassie (a female) was played by a dog called Pal, a male dog. In fact, all of the dogs that played Lassie over the years were males, because they looked better on camera, retaining a thick coat even during the summer months.

Suzanne Vega is a singer-songwriter from Santa Monica, California. Her two most famous songs are “Luka” and “Tom’s Diner”, both released in the eighties.

Jennifer Saunders is a remarkable English comedian who is perhaps best known in North America as a lead in the Brticom “Absolutely Fabulous”. She also made guest appearances on the American sitcoms “Roseanne” and “Friends”.

The Ruhr is a river in Germany that flows into the lower Rhine. The river gives its name to the Ruhr River Valley and the Ruhr district, the largest urban agglomeration in the country.

“Gidget” is an early “beach party film” that was released in 1959. The movie stars Sandra Dee as a teenage girl who falls in love with a young surfer. The surfer’s gang gives the young lass the nickname “Gidget”, a portmanteau of “girl” and “midget”.

Actress Sandra Dee started out as a model before moving into film. After a promising start to her career it seemed to peter out, and the public became more interested in her 7-year marriage to Bobby Darin. And of course she will forever be remembered from the song in the movie and stage-show “Grease” called “Look at Me, I’m Sandra Dee”.

46 Dangles a carrot in front of : TEMPTS