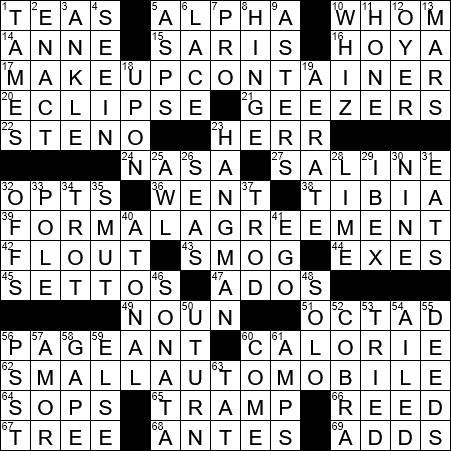 Today’s Theme (according to Bill): Compacts

Twinings is a distributor of tea that was founded in England in 1706. That’s a long time ago! The Twinings logo is the oldest continuously-used logo in the world.

Anne Donovan was a basketball player and coach. She became the first woman to coach a WNBA Championship team when she led the Seattle Storm to the title in 2004. Donovan also represented the US, both as a player and a coach.

“Apollo 11” is a 2019 documentary film about the famed 1969 moon landing. This remarkable movie consists entirely of archival footage, without any contemporary narration added. Recommended …

The fibula is the calf bone. The fibula lies beside the tibia, with both bones sitting under the femur.

I wish we’d stop using the term “calorie”, because it is so confusing. In terms of physics, a calorie is the amount of energy needed to raise the temperature of one gram of water by one degree celsius (at one atmosphere of pressure). The so-called “food calorie” is one thousand times as large, as it is defined in terms of kilograms instead of grams. In attempts to differentiate between these two definitions, the former is sometimes referred to as the “small calorie” and is given the symbol “cal”. The latter is referred to as the “large calorie” and given the symbol “Cal”, with a capital C. If only we’d use the SI system of units, we’d be think in just joules, instead of large and small and food calories.

“Lady and the Tramp” is a classic animated feature from Walt Disney that was released in 1955. The title characters are a female American cocker spaniel and a male stray mutt. Who can forget the scene where the Tramp and Lady are “on a date”, and together eat that one strand of spaghetti? So cute! Disney made a 2019 live-action adaptation of the original using the same title.

The tupelo is genus of tree in the dogwood family. The tree gives its name to the city of Tupelo, Mississippi.

“Oyer” is a term used to describe the reading out loud of a document in court.

Bruno Mars is a singer-songwriter from Honolulu who has been active in the music business since 2006. “Bruno Mars” is a stage name, as Mars was born Peter Hernandez.

The word-guessing game called Hangman seems to have been played first in Victorian England. At one time it was known as “Birds, Beasts and Fishes” as the words to be guessed had to be types of animal.

The pole vault has been an Olympic event for men since the 1896 games. However, women’s pole vaulting was only introduced at the 2000 games.

52 One leading a charmed life? : COBRA

Snake charmers don’t actually hypnotize their cobras, but they do train them. The snake is trained to “follow” the movement of end of the pungi, the instrument that the charmer uses in the act. The snake presents no danger to the charmer or the audience, as it is typically defanged or has it’s mouth partially stitched up so that only the tongue can be moved in and out. Not a very nice practice …

That would be the closing of a house sale.