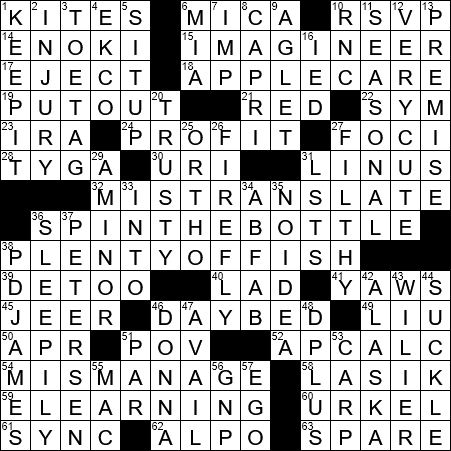 Mica is a silicate mineral. Thin sheets of mica are transparent and are used in place of glass in certain applications. This form of mica is called isinglass, and as it has a better thermal performance than glass it is a great choice for peepholes in boilers and lanterns. Mica is also used in the electronics industry, making use of its unique electrical and thermal insulating properties.

The Walt Disney Company coined the term “imagineering” to describe the creation and construction of Disney theme parks.

“Tyga” is the stage name of hip hop artist Michael Stevenson from Compton, California. Apparently, the stage name comes from the phrase “thank you God always”.

31 Only Nobelist besides Marie to win the prize in two fields : LINUS

Being a chemist myself by training, I have nothing but admiration for Linus Pauling, who was perhaps America’s greatest chemist of all time. Pauling is the only person to have individually been awarded two Nobel Prizes (for Chemistry in 1954, and the Peace Prize in 1962). During WWI he worked on military research & development, but after the war he adopted the pacifist views of his wife and led a campaign to ban above-ground nuclear testing, for which he was awarded his Peace Prize.

38 OkCupid alternative with an oceanic name : PLENTY OF FISH

Plenty of Fish (POF) is an online dating website based in Vancouver. Founded in 2003, POF had over 100 million registered users by 2015.

Steve Urkel is a character on the TV show “Family Matters” that originally aired in the late eighties and nineties. The Urkel character was the archetypal “geek”, played by Jaleel White. Urkel was originally written into the show’s storyline for just one episode, but before long, Urkel was the show’s most popular recurring character.

“Crimson Peak” is a 2015 movie described as a “gothic romance horror film”. Not for me …

Capri pants first became popular on the island of Capri, apparently. They were invented in Europe in 1948, but only became stylish in the US in the sixties. Mary Tyler Moore often wore Capri pants on “The Dick Van Dyke Show” and to some extent she sparked a fashion trend. After a lull in the seventies and eighties there was a resurgence in sales after Uma Thurman wore them (and danced in them) in “Pulp Fiction”.

An aglet is a plastic or metal sheath that is found on the end of a shoelace or perhaps a drawstring. The name “aglet” comes from the Old French word “aiguillette” meaning “needle”.

National leadership of the Republican Party is provided by the Republican National Committee (RNC). Only one chairperson of the RNC has been elected to the office of US president, and that was George H. W. Bush.

29 Key with no sharps or flats : A MINOR

Experts, unlike me, can wax lyrical on the technical differences between major and minor keys and scales. To me, music written in major keys is very strident, often very joyful and “honest”. Music written in minor keys (usually my favorite) is more feminine, more delicate and often quite sad.

The initialism “LST” stands for Landing Ship, Tank. LSTs are the large vessels used mainly in WWII that have doors at either ends through which tanks and other vehicles can roll off and onto beaches. The design concept persists to this day in the huge fleet of commercial roll-on/roll-off car ferries, all inspired by the LST.

The actor William Petersen is best known for portraying forensic scientist Gil Grissom on the “CSI: Crime Scene Investigation”. Petersen quit acting in the show after nine seasons, and moved into the role of executive producer.

P. D. James was an incredibly successful English author of crime fiction, with her most famous books being a series that features a policeman and sometime poet named Adam Dalgliesh. James’ 1992 novel called “The Children of Men” was adapted into a 2006 movie (“Children of Men”) starring Clive Owen and Julianne Moore. It tells of a world that develops after two generations of human infertility.

The Kenai Peninsula juts out into the Gulf of Alaska from Alaska’s southern coast. The Kenai Peninsula is home to several towns, including Homer, Alaska. Homer is nicknamed “the end of the road” as it is a terminus for North America’s paved highway system. The peninsula is also home to Kenai Fjords National Park.