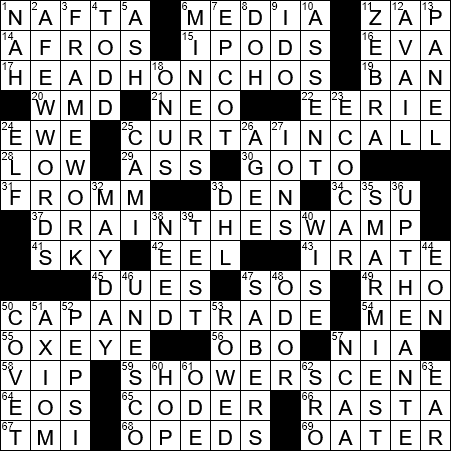 Themed answers each start with something associated with a SHOWER:

1 Commerce pact to be replaced by USMCA when its ratified : NAFTA

The North American Free Trade Agreement (NAFTA) is a treaty between Canada, Mexico and the United States. When NAFTA came into force in 1994, it set up the largest free trade zone in the world. The plan is to supercede NAFTA with the USMCA (United States–Mexico–Canada Agreement).

Eva Longoria is a fashion model and actress who had a regular role on TV’s “Desperate Housewives” playing Gabrielle Solis.

What we now know as the Iraq War started on 20 March 2003 with an invasion by a coalition of forces led by the US. The end of the Iraq War has been set at 15 December 2011, on which date there was a flag-lowering ceremony in Baghdad. The last US troops left Iraq three days later.

Erich Fromm was a German psychologist. Fromm studied extensively the work of Sigmund Freud, and became very critical of his theories. He was also noted for his political views, and had a socialist leaning. He spent some time in the US and was active in the Socialist Party of America in the fifties, when McCarthyism was running rampant.

“The Art of Loving” is a 1956 book by the German-American psychoanalyst Erich Fromm. In the work, Fromm rejects the concept of romantic love, love that is magical and mysterious. He argues that love is a skill that can be taught and developed, and that true love involves care, responsibility, respect and knowledge.

The origins of the Colorado city of Fort Collins go back to Camp Collins, which was erected in the mid-1860s to protect the overland mail route passing through the area. The US Army then founded Fort Collins as a military outpost in 1864. The Collins name comes from army officer Lieutenant William O. Collins, who was in charge of Fort Laramie located 150 miles to the north. It was Collins who authorized the establishment of both Camp Collins and Fort Collins.

“Men Explain Things to Me” is a 2014 collection of seven essays by American writer Rebecca Solnit. The book’s title is taken from the first essay, a 2008 work that explores the silencing of women, and the concept that men always know better. This essay inspired the use of the term “mansplaining”.

Oxeyes are in the daisy family of plants.

“Empire” is a musical drama series that first aired on Fox early in 2015. The title refers to a hip hop music company.

59 Classic “Psycho” segment where one might see the starts of the answers to starred clues : SHOWER SCENE

The classic Alfred Hitchcock suspense film “Psycho” released in 1960 is based on a 1959 novel of the same name by Robert Bloch. The Bloch novel in turn is loosely based on actual crimes committed by murderer and grave robber Ed Gein. When “Psycho” was making its initial run in theaters, latecomers were not granted admission, abiding by a policy instigated by Hitchcock himself. He felt that anyone missing the opening scenes would not enjoy the film.

The island nation of Jamaica is located just under 100 miles south of Cuba in the Carribean Sea. Christopher Columbus first visited the island in 1494, and he and his crew were stranded there for over a year from 1503-1504. Spanish rule devastated the local population, though violence and disease. As a result, the Spanish transplanted African slaves to Jamaica to work as labourers. Spain lost Jamaica to the English in 1655. Given the turbulent history, most Jamaicans today are of African descent, and Jamaica is the third-most populous English-speaking country in the Americas (after the US and Canada).

The term “oater” that is used for a Western movie comes from the number of horses seen, as horses love oats!

Back in the 1930s, a manufacturer in Cincinnati produced a doughy compound that was used to clean wallpaper. Twenty years later, school-kids started using the cleaning material as a modelling compound, so the manufacturer reworked the formula, and sold it to local schools. It was given the name “Play-Doh”.

The Model X is an all-electric crossover SUV made by Tesla Motors in Fremont, California. The Model X is built on Tesla’s Model S sedan platform.

“The Hobbit, or There and Back Again” is a children’s fantasy novel by J. R. R. Tolkien that was popular from the time of its first publication in 1937. Included in the early awards for “The Hobbit” was a prize for best juvenile fiction from “The New York Herald Tribune”. Tolkien adapted his succeeding novel “The Lord of the Rings” to incorporate elements in “The Hobbit”, so that the two tales are very much related.

The term “Mayday” is an emergency codeword that is used internationally as a distress signal, especially when making a radio transmission. “Mayday” comes from the French phrase “venez m’aider” meaning “come to help me”. When used properly, the term is repeated three times in a row: “Mayday Mayday Mayday”.

“Baking soda” is a common name for the compound sodium bicarbonate (NaHCO3).

According to the Book of Exodus, the wording for the tenth commandment is:

“Cola Wars” is a phrase used to describe the competing marketing campaigns of Coca Cola and PepsiCo. Coke is winning …