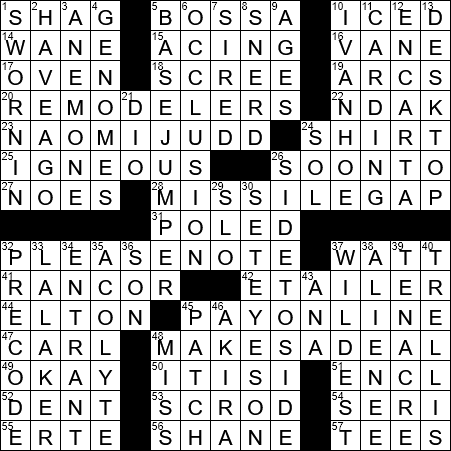 To shag (I am reliably informed, never having played a game of baseball in my life!) is to chase and catch a fly ball.

Bossa nova is a style of music from Brazil that evolved from samba. The most famous piece of bossa nova is the song “The Girl from Ipanema”. The term “bossa nova” translates from Potuguese as “new trend”, or more colloquially as “new wave”.

During the Cold War, future-president John F. Kennedy coined the term “missile gap” to describe the perceived superiority of number of ballistic missiles deployed by the USSR compared to the US. Kennedy used such language to help portray President Dwight D. Eisenhower as weak on defense. It became clear, some years later, that the so-called missile gap was fictitious.

Bernie Taupin is the celebrated lyricist who wrote the words to so many of the songs composed and published by Elton John. The pair were brought together by the music paper “New Musical Express” in England. Elton John submitted some of his work to the paper in 1967, and Taupin answered an ad for songwriters. The paper brought the two together, and they’ve worked together ever since.

“Contact” is a sci-fi novel by Carl Sagan that was first published in 1985. Sagan had written “Contact” originally as a screenplay in 1979, but when plans for the film stalled, Sagan decided to go ahead and create the novel. An excellent film did eventually hit the theaters in 1997, and starred Jodie Foster.

Se-Ri Pak is a South Korean golfer playing on the LPGA tour. Having a Korean name, we really should be calling her Pak Se-Ri, as she is known in her homeland. Korean names always start with the family name.

55 Artist’s pseudonym formed from the French pronunciation of his initials : ERTE

The classic 1953 western movie “Shane” is based on the novel of the same name by Jack Schaefer published in 1949. Heading the cast is Alan Ladd in the title role, alongside Jean Arthur and Van Heflin.

The last few years of actor Alan Ladd’s life were pretty rough. In 1962, he was found unconscious in a pool of blood with a bullet wound in his chest, an abortive suicide attempt. Two years later he was found dead, apparently having succumbed to an accidental overdose of drugs and sedatives. He was 50 years old.

The Ranunculus genus of flowering plants can also be referred to as “buttercups”. The name “buttercup” may be the result of a traditional belief that cows eat buttercups, resulting in the yellow color of butter. However, buttercups are poisonous to cows, and so they avoid them.

In the famous novel by Sir Walter Scott, the title character “Ivanhoe” marries the Lady Rowena.

“Ivanhoe” is an 1819 historical novel by Sir Walter Scott that is set in 12th-century England. The story is divided into three adventures that involve such characters as Richard the Lionheart, King John and Robin Hood, although the protagonist is a Saxon knight named Sir Wilfred of Ivanhoe. An underlying theme in the book is the tension between the Saxons and the Normans who conquered Britain a century earlier.

Microsoft badly wanted to get into the online encyclopedia business in the eighties, and approached the biggest and the best, “Encyclopaedia Britannica”. “Britannica” declined, fearing that an online version would damage their print sales. “Britannica” had to sell eventually, but not to Microsoft, as the inevitable decline in print sales happened anyway. So Microsoft made a deal with “Funk & Wagnalls” and started publishing “Encarta” in disk form in the early nineties. Usage of Encarta grew until along came Wikipedia. Encarta was discontinued at the end of 2009.

Sol was the Roman god personifying the sun. For centuries, English astronomers have used the name “Sol” for the Sun, to distinguish it from suns in other planetary systems.

32 Like Hollywood films before censorship guidelines were introduced : PRE-CODE

The Motion Picture Production Code that was in place from 1930 to 1968 was named for Presbyterian elder Will H. Hays. Hays was hired by the movie studios to help clean up Hollywood’s image after several scandals had hit the industry. The actual list of standards was drawn up by Catholic layman Martin Quigley and Jesuit priest Father Daniel A. Lord in 1929, but the code still came to be known as the Hays Code.

A 1K race is run over one kilometer.

An alienee is one to whom ownership of property is transferred, is “alienated”.

I wish you were here, I miss you.