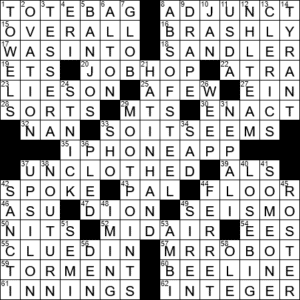 8 Usually not eligible for tenure, as a professor : ADJUNCT

In the US, an adjunct professor is one that is hired on a contractual basis, possibly part-time.

Adam Sandler’s big break was with “Saturday Night Live” (SNL). He then went on to make several successful movies and has his own movie and television production company. Personally, I am not a fan of Adam Sandler as a performer, nor a fan of his movies …

“The Meyerowitz Stories” is a 2017 comedy-drama film with quite the cast, including Adam Sandler, Ben Stiller, Dustin Hoffman, Emma Thompson, Candice Bergen and Judd Hirsch. The characters played by Hoffman and Thompson have a poodle named Bruno. Bruno won the 2007 Palm Dog Award at the Cannes Film Festival. Yes, the award for the best performing dog in a movie screened at the Cannes Film Festival.

The antagonists in the “Alien” series of films are extraterrestrials, described at one point in the script as “xenomorphs”. The term “xenomorph” was coined for the screen using the Greek roots “xeno-” (other, strange) and “-morph” (shape).

“Au naturel” is a French phrase, one simply meaning “in a natural state”. We use the term in English in the same sense, and also to mean “nude”.

The combining form “seismo-” means “earthquake”, and comes from “seismos”, the Greek for “earthquake”.

“Mr. Robot” is an engaging drama series about an anxious and clinically depressed computer hacker. Said hacker joins an anarchic group of hackers known as “Mr. Robot” who are intent on taking down the largest conglomerate in the world. I binge-watched the first two series, and really enjoyed the experience …

60 Opposite of a scenic route : BEELINE

To make a beeline for somewhere or something, one takes a direct route. The term derives from the excellent homing instinct of bees.

61 Frames on a diamond : INNINGS

An integer is a number that does not include a fraction. The word “integer” is Latin for “whole”.

A tessera is an individual tile used in making a mosaic. Tesserae are usually formed in the shape of cubes.

5 Pete Seeger wrote a book on how to play five-string ones : BANJOS

6 Brown in the kitchen : ALTON

January is the first month of our Gregorian calendar. It is named for Janus, the Roman god of beginnings and transitions.

The Food and Nutrition Service (FNS) is the agency within the US Department of Agriculture that administers nutrition assistance programs designed to eliminate hunger in the country.

12 Minnesota Wild, for one : NHL TEAM

The Minnesota Wild is the only one of these seven teams that plays in St. Paul, while the rest play in Minneapolis.

In the Islamic tradition, a mullah is a man or woman educated in theology and sacred law.

Although Katmandu is the capital city of the lofty nation of Nepal, it sits in a bowl-shaped valley so is only at an elevation of 4,600 ft. Air pollution is a huge problem in the city. Industry and residents launch a lot of smog into the air, and given the surrounding geography and climate, any pollution blown away during the day tends to fall back into the valley at night.

Upsilon is the 20th letter in the Greek alphabet, and the character that gives rise to the letter Y that we use in English.

The city of Sancti Spíritus in central Cuba was founded way back in 1514 by Spanish conquistador Diego Velázquez de Cuéllar. The name “Sancti Spíritus” translates as “Holy Spirit”.

A group of ferrets is called a “business”. An older collective noun for ferrets is a “fesnyng”.

“Polecat” is a term used for several different animals, most of which are in the weasel family.

A behemoth is something that is huge in size. The term comes from the Hebrew word “b’hemoth”, which is a beast described in the Book of Job. It is suggested that the Biblical creature is an elephant, hippopotamus, rhinoceros, crocodile or perhaps something mythical.