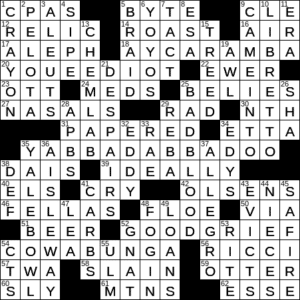 Today’s Theme (according to Bill): Catchwords

Themed answers are each catchwords used by celebrated animated characters:

The Cleveland baseball franchise started out in 1869 as the Forest Citys, named after Forest City, the nickname for Cleveland. After a number of transitions, in 1914 the team took on the name “Indians”. The media came up with the name “Indians” after being asked for suggestions by the team owners. “Indians” was inspired by the successful Boston team of the day, the Boston Braves.

A relic is something that has survived from the past, reminding us of that past.

20 Catchwords from Ren : YOU EEDIOT!

“The Ren & Stimpy Show” is an animated television show created by Canadian animator John Kricfalusi, and which ran on Nickelodeon from 1991 to 1996. The title characters are Marland “Ren” Höek, a scrawny Chihuahua, and Stimpson J. Cat, a rotund Manx cat. Not my cup of tea …

25 Proves to be false : BELIES

40 City trains above the street : ELS

I know very little about the Olsen twins, but I am told that many folks believe Mary-Kate and Ashley to be identical twins. They look very much alike, but are in fact fraternal twins. The sisters were cast as Michelle Tanner on the eighties sitcom “Full House”, taking turns playing the role.

Pilsener (also “pilsner” or “pils”) is a pale lager. The name “pilsener” comes from the city of Pilsen, now in the Czech Republic. It was in Pilsen, in 1842, that the first bottom-fermented lager was produced. A bottom-fermented beer is much clearer that a top-fermented beer, and has a crisper taste. The “top” and “bottom” refers to where the yeast gathers during the brewing process.

Charlie Brown is the main character in the long-running comic strip called “Peanuts”, created by Charles Schulz. Charlie’s catchphrase is “good grief”. He has several persistent frustrations in his life, including an inability to fly a kite. The focus of his kite-flying frustration is the dreaded Kite-Eating Tree.

54 Catchword from a Ninja Turtle : COWABUNGA!

“Cowabunga!” is an exclamation adopted by surfers in the sixties. The original use of “cowabunga!” was on television, as a catchphrase of Chief Thunderthud in “The Howdy Doody Show” in the fifties. The term got even more exposure in the nineties when it was adopted by the “Teenage Mutant Ninja Turtles”.

The Nina Ricci fashion house was founded by Italian-born Maria “Nina” Ricci, in Paris in 1932.

Would you believe that the first yo-yos date back to 500 BC? There is even an ancient Greek vase painting that shows a young man playing with a yo-yo. Centuries later Filipinos were using yo-yos as hunting tools in the 1500s. “Yo-yo” is a Tagalog (Filipino) word meaning “come-come” or simply “return”.

A basic yo-yo trick is to make it go “around the world”. It looks cool, but it’s hard to describe in words …

Madrid is the most populous city in Spain, and is the nation’s capital. It is located very close to the geographical center of the country. Madrid is the second-largest city in the European Union by population, after Berlin. People from Madrid called themselves Madrileños.

Do you remember the band “Johnny Casino & The Gamblers” in the movie “Grease”? That was actually the real-world group named Sha Na Na. Johnny Casino & the Gamblers sang “Those Magic Changes” at the high school dance, in between “Rock’N Roll Is Here to Stay” and “Hound Dog”. Sha Na Na got together in the sixties, hosted the variety show “Sha Na Na” from 1977 to 1981, and are still performing today.

28 Alerts from the LAPD : APBS

Reba McEntire is a country music singer and television actress. McEntire starred in her own sitcom called “Reba” that aired on the WB and the CW cable channels from 2001 to 2007. She is sometimes referred to as “The Queen of Country”.

The Yale Bowl is the football stadium that is home to the Yale Bulldogs.

One might find a definition (def.) in a dictionary (dict.).

Perhaps most notably, the eating of relatively few carbohydrates is central to the diet proposed by Robert Atkins. Atkins first laid out the principles behind the Atkins diet in a research paper published in 1958 in the “Journal of the American Medical Association”. He popularized his diet starting in 1972 with his book “Dr. Atkins’ Diet Revolution”.

William Safire was a syndicated columnist for “The New York Times”. In that paper, he wrote the column title “On Language”, which explored the etymologies of popular words. Safire also worked for the Nixon election campaigns in 1960 and 1968, and was a speechwriter for both Richard Nixon and Spiro Agnew.

Baptism is a rite, in many Christian traditions, in which a candidate is admitted to the Church. The ceremony usually uses water as a sign of purification. Water may be poured on the head, or the candidate may be totally immersed.