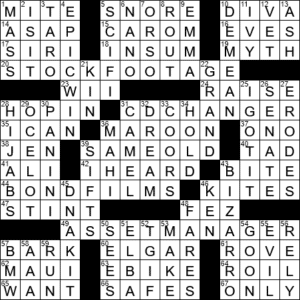 Themed answers each start with something handled by an ASSET MANAGER:

Jennifer Aniston won a 2002 Emmy for playing Rachel on the great sitcom “Friends”. Jennifer’s parents are both actors, and her godfather was the actor Telly Savalas.

Sir Edward Elgar was the quintessential English composer. He is inextricably associated with his “Pomp and Circumstance” marches (including “Land of Hope and Glory”) and the “Enigma Variations”.

If you visit the island of Maui, a trip to the Haleakala National Park is a must. One section of the park features the spectacular Haleakala Crater, where you would swear you are on the moon. The second part of the park is the Kipahulu section, which features the very picturesque pools accessed along the Road to Hana. When we visited (quite a few years ago), the Road to Hana was a tad undeveloped and rental car companies would not allow you to drive their cars there. Funnily enough, the only cars you’d meet on the Road to Hana were rental cars …

6 Prefix between micro- and pico- : NANO-

The prefix “nano-” is used for units of one thousand-millionth part. “Nano-” comes from the Greek “nanos” meaning “dwarf”.

Our word “senate” comes from the Latin name for such a body, namely “senatus”. In turn, “senatus” is derived from “senex” meaning “old man”, reflecting the original Roman Senate’s makeup as a council of “elders”.

In Italy, a sandwich made from sliced bread is called a “tramezzino”, while sandwiches made from non-sliced breads are called “panini” (singular “panino”). We’ve imported the term “panini” into English to describe a pressed and toasted sandwich.

“Mahi-mahi” is the Hawaiian name for the dolphinfish, which is also called the dorado. The mahi-mahi is an ugly looking creature if ever I saw one …

Bizarro World is a planet in the DC Comics universe. It is a world of opposites, and is inhabited by its own versions (mirror images) of other characters. For example, Bizarro is a supervillain, and someone with the opposite characteristics of Superman. There is also a Bizarro Lois Lane and a Bizarro Jimmy Olsen. The Bizarro version of Batman is Batzarro, who is billed as the “World’s Worst Detective”.

Ancestry.com is the largest commercial genealogy company in the world. It operates out of Provo, Utah.

Ken Jennings is a remarkable man, the person who had the longest winning streak on television’s “Jeopardy”. He has also won more game show money than any other person. He was defeated after 75 appearances on the show, after racking up over $2.5 million in the prior episodes.

“Hood” is a slang term for “gangster”, a shortening of “hoodlum”.

The initialism “BMW” stands for Bayerische Motoren Werke, which translates into Bavarian Motor Works. BMW was making aircraft engines during WWI, but had to cease that activity according to the terms of the Treaty of Versailles. The company then started making motorcycles, and moved into automobile production starting in 1928. BMW moved back into aircraft engine manufacturing during the build-up of the Luftwaffe prior to WWII.