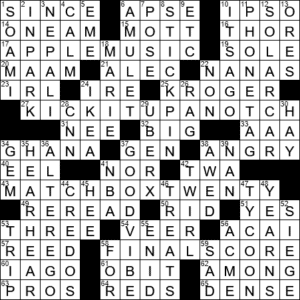 Themed answers each end with a synonym of “SCORE”:

“Since U Been Gone” is a song written by Max Martin and Dr. Luke that they hoped would be recorded by Pink. Pink passed on the opportunity to record it, and so they offered it to Hilary Duff. Duff passed as well, and so the song went to Kelly Clarkson. Clarkson’s 2004 recording did well in the charts.

Kelly Clarkson was the first winner of “American Idol”. That’s all I know …

16 Superhero whose surname is Odinson : THOR

Apple Music is a streaming service launched by Apple in 2015 that provides both video content as well as music.

To incense someone is to arouse his or her anger. The contemporary usage of “to incense” evolved from the 15th-century meaning “to arouse, inspire”. The verb comes from the Latin “incendere” meaning “to set on fire”.

Matchbox Twenty is a rock band from Orlando, Florida that formed in 1995. The group’s 2003 song “Unwell” was the second most-played song in the US that year.

Two’s company, and three’s a crowd.

“Candy apple” is yet another term that I had to learn when I came to the US. Candy apples are called “toffee apples” outside of North America.

“Morpheme” is a term used in linguistics. A morpheme is a language’s smallest grammatical unit. A word may have several morphemes. A prefix such as “un-” is an example of a morpheme in English, as is the letter “s” added at the end of a word to make a plural.

Amulets are items worn to ward off disease or to protect against harmful magic spells.

Marie Kondo runs a very successful organizing consulting business that she founded when she 19 years old, and while a student at Tokyo Woman’s Christian University. She wrote an extremely successful book titled “The Life-Changing Magic of Tidying Up: The Japanese Art of Decluttering and Organizing” that was first published in 2011. I’ve read it, and acted on the advice given therein …

Our term “tycoon” meaning powerful business person was originally used by foreigners to describe the shogun of Japan. “Tycoon” is an anglicization of the Japanese “taikun” meaning “great lord or prince”.