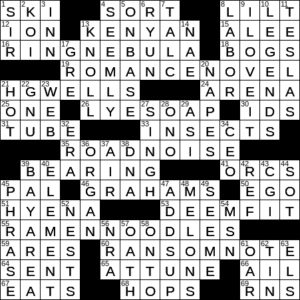 15 Sheltered from the wind : ALEE

The Ring Nebula is located in the Lyra constellation, was discovered in 1779 by Charles Messier. The “ring” is a shell of ionized gas that was expelled by a degenerating star as it evolves into a white dwarf.

The full name of the English author known as H. G. Wells was Herbert George Wells. Wells is particularly well known for his works of science fiction, including “The War of the Worlds”, “The Time Machine”, “The Invisible Man” and “The Island of Doctor Moreau”. He was a prolific author, and a prolific lover as well. While married to one of his former students with whom he had two sons, he also had a child with writer Amber Reeves, and another child with author Rebecca West.

The first toothpaste in a tube was introduced by Johnson & Johnson, in 1889. Back then, toothpaste tubes were made from tin, zinc or lead.

Entomology is the branch of zoology concerned with the study of insects. The etymology(!) of “entomology” is the Greek “entomon” (meaning “insect”) and “logia” (meaning “study of”). In turn, the Greek word “entomos” for insect is a literal translation into Greek of “having a notch or cut”, in deference to the observation by Aristotle that insects have segmented bodies.

General Mills was founded in 1928 in Minneapolis with the merger of four mills, most notably one owned by the Washburn-Crosby Company. The newly formed General Mills paid a dividend in the year of its founding, and has paid a dividend every year since then. There are only a few companies that have consistently paid out dividends to their investments for such a long period.

69 Hosp. staffers, or an initial feature of the answers to starred clues : RNS

Jim Ryun is a former US congressman and retired Olympic track and field athlete. In 1964, he became the first high school athlete to run a mile in under four minutes. He ran in the 1964 Olympics when he was only 17 years old, making him the youngest American male track athlete to ever qualify for the Olympic Games. He competed again in 1968, and came away with the silver medal for the 1,500 meters. Ryun entered politics in 1996, and represented Kansas’s 2nd District in the US Congress from 1996 to 2007.

Jeff Bezos is the founder and CEO of Amazon.com, a company that he set up in his garage in 1994. Bezos used some of the fortune that he made with Amazon to purchase “The Washington Post” in 2013.

The city of San Francisco was established in 1776, just a few days before the US declared independence from Britain on the other side of the continent. San Francisco was founded by Spanish colonists who set up a fort at the Golden Gate and a nearby mission named for St. Francis of Assisi.

What we call honeydew melons are also known as white antibes, especially in France and Algeria where the cultivar has been grown for many years. Antibes is a commune in southeastern France, located between Nice and Cannes.