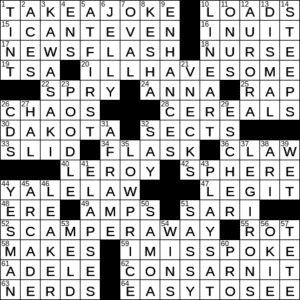 Nunavut is Canadian territory that dates back to 1999 when it was separated from the Northwest Territories. That makes Nunavut the youngest of all Canada’s territories. It is also the nation’s largest territory, the least populous, as well as the furthest north. Even though it is the second-largest country subdivision in North America (after Greenland), Nunavut is home to just over 30,000 people, who are mostly Inuit.

Mervyn LeRoy was a Hollywood director who is best known perhaps for directing the historical epic “Quo Vadis” in 1951. That said, the list of other movies for which he was at the helm is long and impressive, including “Little Caesar” (1931) and “Thirty Seconds Over Tokyo” (1944). LeRoy’s personal life was very much embedded in Hollywood. After his first marriage ended, he dated actress Ginger Rogers, before marrying Doris Warner, daughter of Harry Warner of Warner Bros. fame. When LeRoy sold his home in Bel Air, the buyer was TV host Johnny Carson.

“Quo Vadis” is an epic drama made in 1951 that is a film adaptation of the 1896 novel of the same name written by Henryk Sienkiewicz. At the top of the bill are Robert Taylor and Deborah Kerr, with Peter Ustinov playing Emperor Nero. There was also an uncredited extra making her first appearance on the screen, a young lady by the name of Sophia Loren.

44 Alma mater of about half the Supreme Court : YALE LAW

Yale Law School was established in 1824. The school only admitted male applicants up until 1918, when it began accepting the first female students.

Associate Justice Brett Kavanaugh was nominated by President Donald Trump to succeed Anthony Kennedy on the Supreme Court. Kavanaugh took the oath of office in 2018, after what can only be described as a contentious confirmation hearing. He has been married since 2004 to Ashley Estes, who served as Personal Secretary to President George W. Bush from 2001 to 2004.

“Hogwash” means “rubbish, of little value”. “Hogwash” was originally the name of swill fed to pigs.

“Jet Ski” is actually a brand name owned by Kawasaki Heavy Industries of Japan. The generic term, not often used, is “personal watercraft”. Most people use the term “Jet Ski” generically, although “WaveRunner” is also popular. But that’s another brand name, one owned by Yamaha.

There are two letters N (ens) in the word “dinner”.

The standard poodle breed of dog is considered to be the second-most intelligent breed, after the border collie. The name “poodle” comes from a Low German word meaning “to splash about”, reflecting the original use of the breed as a water retriever.

M. C. Escher was a graphic artist from the Netherlands. Escher was noted for creating works inspired by mathematics, often works that were physical impossibilities. One such work is “Drawing Hands” (1948) in which a pair of hands emerge from a piece of paper and actually draw themselves. He also created a drawing in which a group of red ants are crawling around a Möbius strip, never reaching the end.

“Cool Hand Luke” is a prison drama from 1967 starring Paul Newman in the title role. The film was an adaptation of Donn Pearce’s novel of the same name. One of the most quoted lines from any movie comes from “Cool Hand Luke”, namely: “What we’ve got here is failure to communicate.” That is also one of the most misquoted lines from a movie, as it is often cited as “What we have here is a failure to communicate”.

Chase Field in Phoenix is the home of the Arizona Diamondbacks MLB team. The stadium opened in 1998 as Bank One Ballpark, which earned it the nickname “BOB”. The name changed in 2005 following the merger of Bank One with JPMorgan Chase. Chase Field has a natural grass playing surface, and a retractable roof. The roof is kept open almost all the time, and is only closed for games when the temperature needs to be dropped using the stadium’s massive air conditioning plant.

Arcade Fire is an indie rock band from Montreal. The group is a bit of a family affair as two of the band’s members are husband and wife, and one is the husband’s brother.