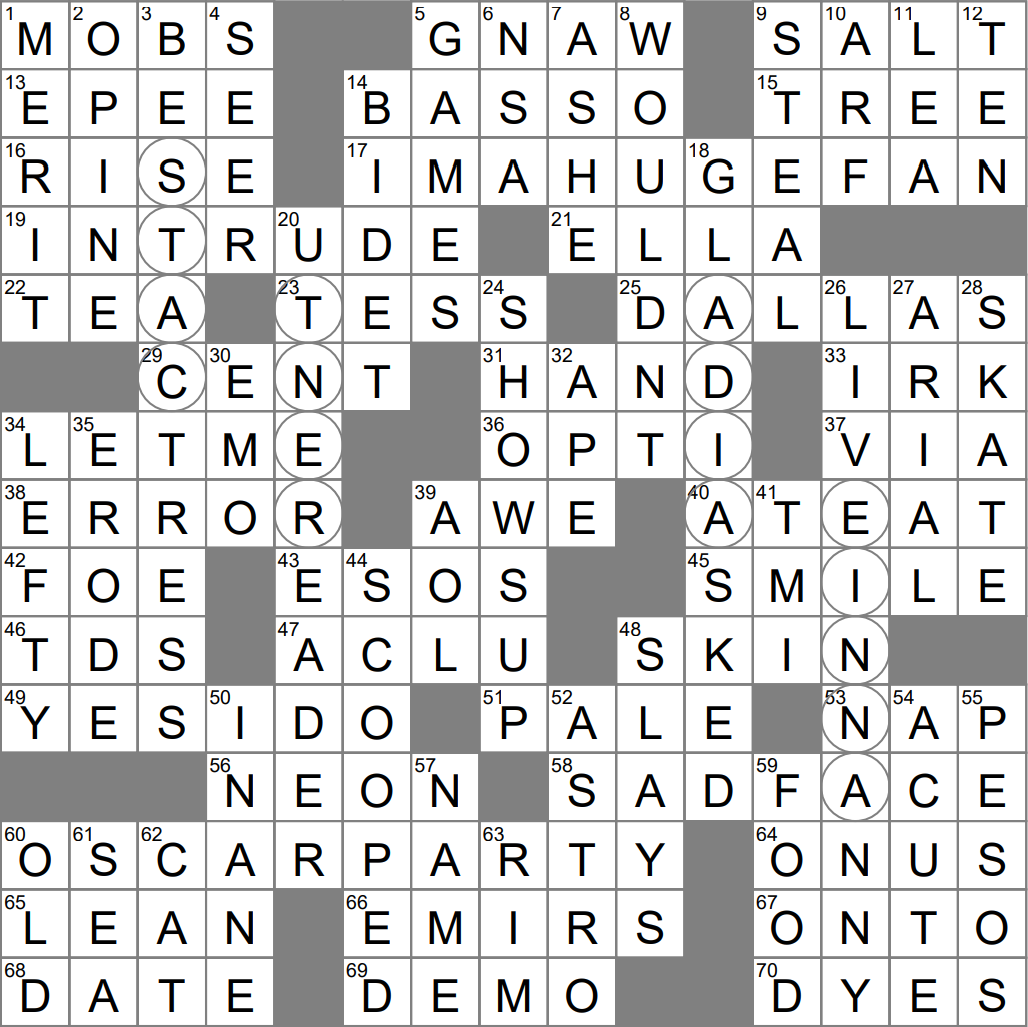 Themed answers are all in the down-direction, and each includes the name of a SHOW as a hidden word written in the UP-direction:

There are several species of gray squirrel that are native to North America. Even though I live here in the west of the continent, I am most familiar with the eastern gray squirrel. That’s because that particular species was introduced into Italy in 1948, and now the whole continent is overrun with the animal. The result in Britain and Ireland is that the native red squirrel population is now endangered and there are active programs to eradicate the invading species. There was even a plan to have celebrity chefs promote gray squirrel recipes in an effort to cull the population!

“Joshua tree” is the common name for the plant species more correctly called Yucca brevifolia. One of the best places to see Joshua trees is in the beautiful Joshua Tree National Park in Southern California. The plant was named by Mormon settlers crossing the Mojave Desert in the mid-1800s. The name was chosen as the shape of the tree reminded the settlers of Joshua reaching his hands to the sky in prayer.

Ella Baker was a human rights activist and champion of civil rights for African Americans. As well as fighting racism in America, she fought sexism within the civil rights movement.

22 Beverage brewed in a chawan : TEA

A chawan is a bowl used for preparing and drinking tea, especially in tea ceremonies that are part of some East Asiam cultures. The term “chawan” translates from Japanese as “bowl”.

Tess Gerritsen is a novelist and retired physician. Her most famous novels are the “Rizzoli & Isles” series, featuring homicide detective Jane Rizzoli and medical examiner Maura Isles. The Isles character also appears in the stand-alone crime thriller “The Bone Garden”, first published in 2007.

25 City that hosts the State Fair of Texas : DALLAS

The 5-cent American coin known as a nickel is actually made up of 75% copper and 25% nickel. The first nickel was introduced in 1866, and was named the Shield nickel due to the shield design on the front of the coin. The current design is the Jefferson nickel, which was introduced in 1938.

OPTI-FREE is a line of contact lens solutions made by Alcon.

Thanos is a supervillain in the Marvel Comics universe. He was portrayed by Damion Poitier in the 2012 movie “The Avengers”, and by Josh Brolin in several subsequent movies including 2014’s “Guardians of the Galaxy”.

Photographers often instruct us to say “cheese” to elicit a smile-like expression. Even Japanese photographers use the word “cheese” to achieve the same effect. Bulgarians use the word “zele” meaning “cabbage”. The Chinese say “eggplant”, the Danish “orange”, the Iranians “apple” and many Latin Americans say “whiskey”.

Date palms can be either male or female. Only the female tree bears fruit (called “dates”).

Andrew Lloyd Webber’s source material for his hit musical “Cats” was T. S. Eliot’s “Old Possum’s Book of Practical Cats”. Eliot’s collection of whimsical poems was published in 1939, and was a personal favorite of Webber as he was growing up. “Cats” is the second longest-running show in Broadway history (Lloyd Webber’s “Phantom of the Opera” is the longest and is still running; deservedly so in my humble opinion). My wife and I have seen “Cats” a couple of times and really enjoyed it …

Go is a strategy board game that was invented in China over 5,500 years ago. Go’s name in Chinese translates as “encircling game”, which reflects the objective of surrounding the largest area on the board.

7 Arthur in the International Tennis Hall of Fame : ASHE

Arthur Ashe Stadium in Queens, New York opened in 1997, and is the largest outdoor, tennis-only venue in the world. The stadium was often criticized for not having a retractable dome to protect the playing surface from inclement weather. Well, that changed in 2016 when the stadium debuted its new retractable roof, a $150 million investment in the facility.

It would, it really would …

“Bidet” is a French word that we imported into English. In French, the word “bidet” originally described a small horse or a pony. The bidet bathroom fixture was so called because one straddles it like a horse in order to use it.

The musical “Rent” by Jonathan Larson is based on the Puccini opera “La bohème”. “Rent” tells the story of struggling artists and musicians living in the Lower East Side of New York, and is set against the backdrop of the AIDS epidemic. We saw “Rent” on Broadway quite a few years ago, and were very disappointed …

The Broadway musical “Annie” is produced in more than one version. There is an “Annie Jr.” that has been edited down to a shortened version more suitable for young performers and audiences. An even shorter version that lasts only 30 minutes is called “Annie KIDS”, and is meant for performers still in elementary school.

“Rollerblade” is actually a brand name. The brand name led to the use of the term “rollerblading” for what is more correctly described as inline skating. Inline skates have wheels arranged in a single line the underside of each boot. This design allows for greater speed and maneuverability than traditional “quad” roller skates.

The musical genre known as screamo (also “skramz”) has been described as an aggressive subgenre of emo. Yikes …

The first video game featuring the ape named Donkey Kong was created in 1981. That same game introduced the world to the character known as Mario, four years before the game Super Mario Bros became such a big hit.

Guadalajara is a populous city in the Mexican state of Jalisco. The Mexican city is named after the city of the same name in the center of Spain.

Plankton are organisms that float in water and are incapable of swimming against a current. Plankton can be classified into four broad groups: