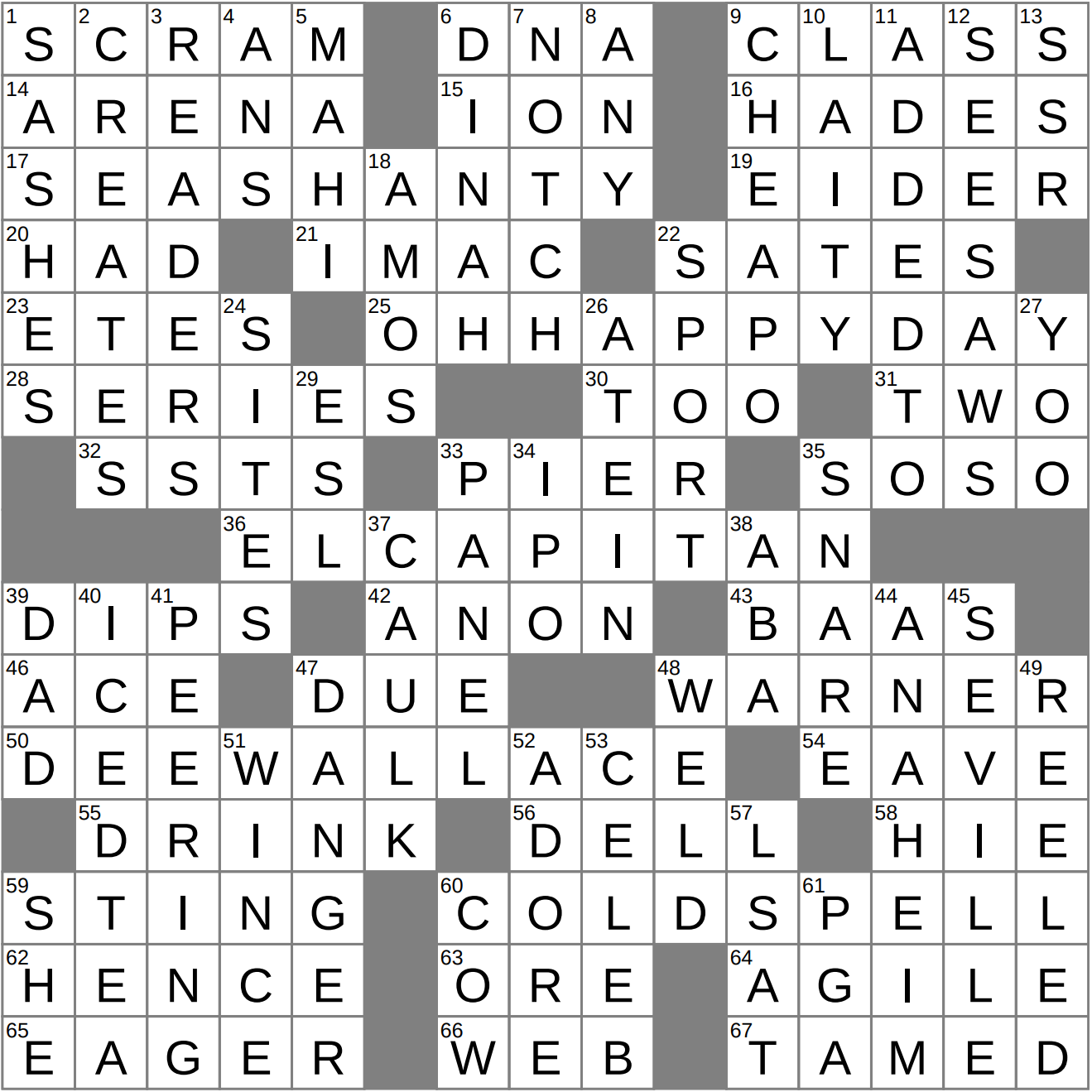 Themed answers each start with a homophone of a letter in the alphabet. Those letters SPELL out the word “COLD”:

“Skedaddle” is a slang term meaning “run away”, one that dates back to the Civil War.

19 Feathers in a duvet : EIDER

A duvet is a large flat bag that is filled with down feathers or a synthetic substitute that is used as a top cover for a bed. Although a duvet is similar to what is called a “comforter” in the US, there is a difference. A duvet often has an easily removed cover that is usually laundered at the same time as the bottom sheet and pillowcases. We use them a lot in Europe, and generally without a top sheet due to the ease of laundering.

“Huzzah” is a cheer, originally a sailor’s interjection, possibly accompanying the hoisting of a sail.

Homophones are words that are pronounced in the same way (e.g., ere, air, err and heir). Homonyms are a subset of homophones, and are words that have the same spelling and the same pronunciation but different meanings, for example, skate (a fish) and skate (worn on the foot).

El Capitan is a stunning vertical rock formation in Yosemite National Park in California. The top of El Capitan has been used as the take-off point for many BASE jumps, parachute jumps made by diving off the top of the rock face. The National Park Service put a stop to the practice in 1999. Soon afterwards, a BASE jumper made an illegal jump to protest the ban. She died …

Actress Dee Wallace is best known for playing young Elliot’s mother in the Steven Spielberg 1982 masterpiece “E.T. the Extra-Terrestrial”. Moving beyond acting, Wallace became a public speaker and author of self-help books. She gave a TED talk on the subject in 2018.

“Dinah Washington” was the stage name of the blues and jazz singer Ruth Lee Jones. When she was once performing at the celebrated London Palladium, she announced (with Queen Elizabeth II sitting in the Royal Box), “There is but one Heaven, one Hell, one queen, and your Elizabeth is an impostor.” That would have created a bit of a stir …

Chintz is a calico fabric that is very florid, and which originated in India. Indian chintz was in such great demand in Europe in the 17th-century, and so much was sold, that both England and France banned its import. This contributed to the term “chintz” being applied derogatively to a fabric, and from there to anything cheap or gaudy.

Squash is a racket sport that is similar to racquetball, with the latter being more common here in the US. Squash is derived from the older sport of racquets, and was introduced around 1830 by students at Harrow School in London. It was originally called squash racquets as the first ball used was a racquets ball that was punctured. It was very, very squashable and much softer than that used in the parent game.

The term “caulk” comes from old Norman French “cauquer”, and described the action of filling gaps with lime. “Caulk” has the same root as our word “chalk”.

44 California home of the Angels and the Ducks : ANAHEIM

The California city of Anaheim is famous as home to the Disneyland resort. Prior to Disneyland opening in 1955, Anaheim was largely an agricultural community. It had been founded in 1857 by a group of German-Americans who were looking for an area suitable for growing grapes. The name “Anaheim” comes from “Ana”, referring to the nearby Santa Ana River, and from “Heim”, a German word meaning “home”.