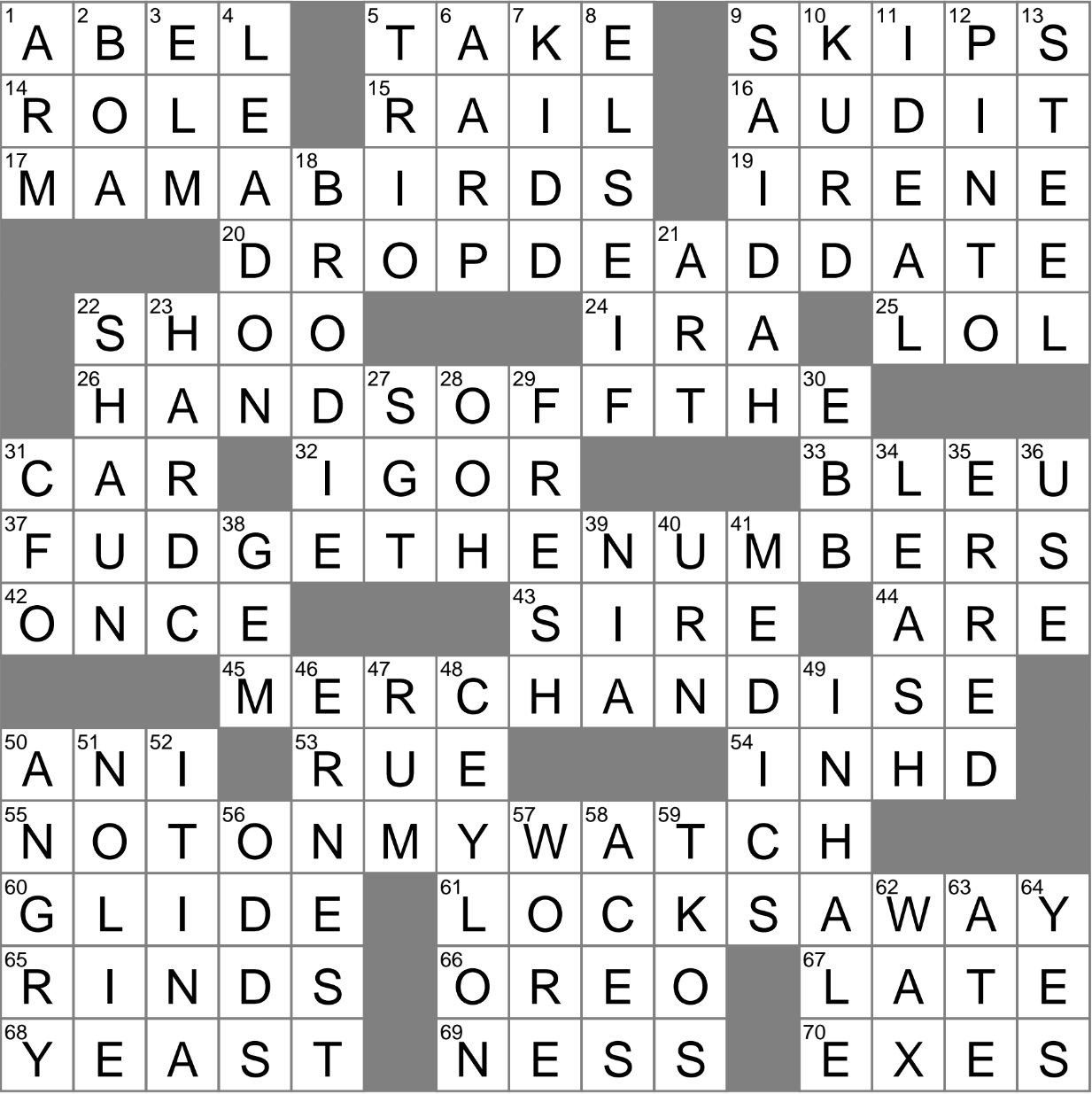 Today’s Theme (according to Bill): A Cleaner Face

Themed answers are common exclamations reinterpreted as instructions to remove items from the face of a WATCH:

Igor Shesterkin is a hockey goaltender from Russia who started playing in the NHL with the New York Rangers in 2019.

The word “stud”, meaning “male horse kept for breeding”, is derived from the Old English word “stod”, which described a whole herd of horses. The term “stud” can be used figuratively for a “ladies’ man”.

54 In very sharp resolution : IN HD

The citrus fruit that we know as the tangerine is so called because the first “tangerines” imported into Europe were sourced in “Tangiers”, the capital city of Morocco in North Africa.

3 Tree on the Great Seal of North Dakota : ELM

Elizabeth “Eliza” Schuyler Hamilton was the wife of Founding Father Alexander Hamilton. Eliza was with her husband when he passed away the day after his famous duel with Vice President Aaron Burr.

Sue Monk Kidd’s first novel is probably her most famous, namely “The Secret Life of Bees”, published in 2002. Said novel was adapted into a 2008 movie of the same name starring Queen Latifah and Dakota Fanning. Kidd also wrote a 2020 novel titled “The Book of Longings” that tells the story of a woman who marries Jesus Christ.

Pinto beans are so-called because their skins have a mottled (“pinto”) appearance.

“The Prime of Miss Jean Brodie” is a novel by Muriel Spark, and a fabulous film of the same name released in 1969 starring Maggie Smith in the title role. The movie also stars Gordon Jackson (who played Hudson the butler on “Upstairs Downstairs”). The story is set in a girls’ school in Edinburgh in the thirties, with Jean Brodie a somewhat eccentric teacher who describes herself as being “in her prime”.

Professional snowboarder Shaun White has won Olympic gold three times, in 2006, 2010 and 2018. White is a red-headed Irish American, and is often referred to as “The Flying Tomato”.

The head letter of the word “cauliflower” is a hard letter C.

Ernest Hemingway moved around a lot. He was born in Illinois, and after leaving school headed to the Italian front during WWI. There he served as an ambulance driver, an experience he used as inspiration for “A Farewell to Arms”. He returned to the US after being seriously wounded, but a few years later moved to Paris where he worked as a foreign correspondent. He covered the Spanish War as a journalist, from Spain, using this experience for “For Whom the Bell Tolls”. During the thirties and forties he had two permanent residences, one in Key West, Florida and one in Cuba. In the late fifties he moved to Ketchum, Idaho, where he committed suicide in 1961.

A dark ‘n’ stormy is a classic cocktail made from dark rum and ginger beer, served over ice. The name comes from the ingredients, with the “dark” being the rum, and the “stormy” being the ginger beer.

“I, Tina” is a 1986 autobiography by Tina Turner. The book was so successful it was adapted into a movie called “What’s Love Got to Do with It?” The film version was released in 1993 and stars Angela Bassett as Tina Turner.

To polish off is to dispose of completely or rapidly. The verb “to polish off” originated as boxing slang in the 1820s, when it described the act of defeating an opponent quickly and easily. The slang usage was probably a reference to finishing a piece of furniture with a coat of polish.